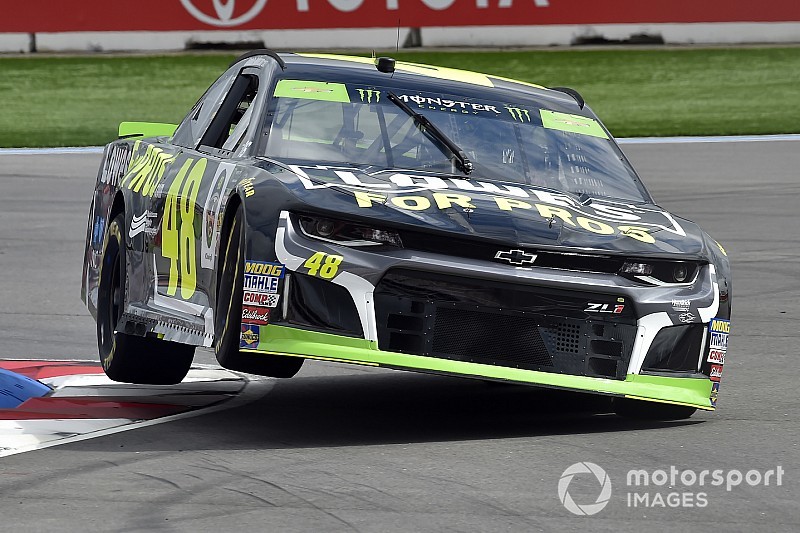 Jimmie Johnson, in danger of getting knocked out of the Monster Energy NASCAR Cup Series playoffs, was fastest in Saturday’s first practice on the Roval at Charlotte Motor Speedway.

Johnson enters Sunday’s Bank of America 400 as one of the four drivers lowest in points and currently in danger of being eliminated from further title contention following Sunday’s race.

In the second half of session, Johnson posted his top average speed of 105.173 mph, topping Xfinity Series regular Daniel Hemric (104.962 mph), who is entered in a third Richard Childress Racing car this weekend.

Elliott was fastest among the drivers who ran at least 10 consecutive laps during the practice (103.100 mph). Jones and Stenhouse was second and third in that category

Ricky Stenhouse Jr. spun early off the exit of front stretch chicane but he was able to continue on without incident.

Aric Almirola spun in Turn 3 and backed into the tire barrier, doing damage to the rear end of his No. 10 Ford. Almirola’s team worked to repair the damage the remainder of the session.

About eight minutes into the session, Darrell Wallace Jr. got loose through the backstretch chicane and slammed into the tire barrier upon exit, doing heavy damage to his No. 43 Chevrolet. Wallace will move to a backup car and have to start Sunday’s race from the rear of the field.

It took approximately seven minutes for track workers to replace the barrier and the practice to return to green conditions.

About 23 minutes into the session pole-winner Kurt Busch experienced a mechanical failure on the frontstretch as he exited the chicane and finally came to a stop on the track in Turn 4, bringing out a caution.

“This tow truck is doing a number on our back bumper, we need to check that all out,” Busch told his team over the radio as his No. 41 Ford was being taken to the garage.

With about five minutes left in the session, Erik Jones went through the backstretch chicane two-wide and slammed into the tire barrier and did significant damage to his No. 20 Toyota. He will move to a backup car and have to start Sunday’s race from the rear of the field.

The barrier couldn’t be replaced before the conclusion of the session.

NASCAR clarifies the penalty for cutting the course at Roval