Justin Allgaier is running his best this season when it counts the most. 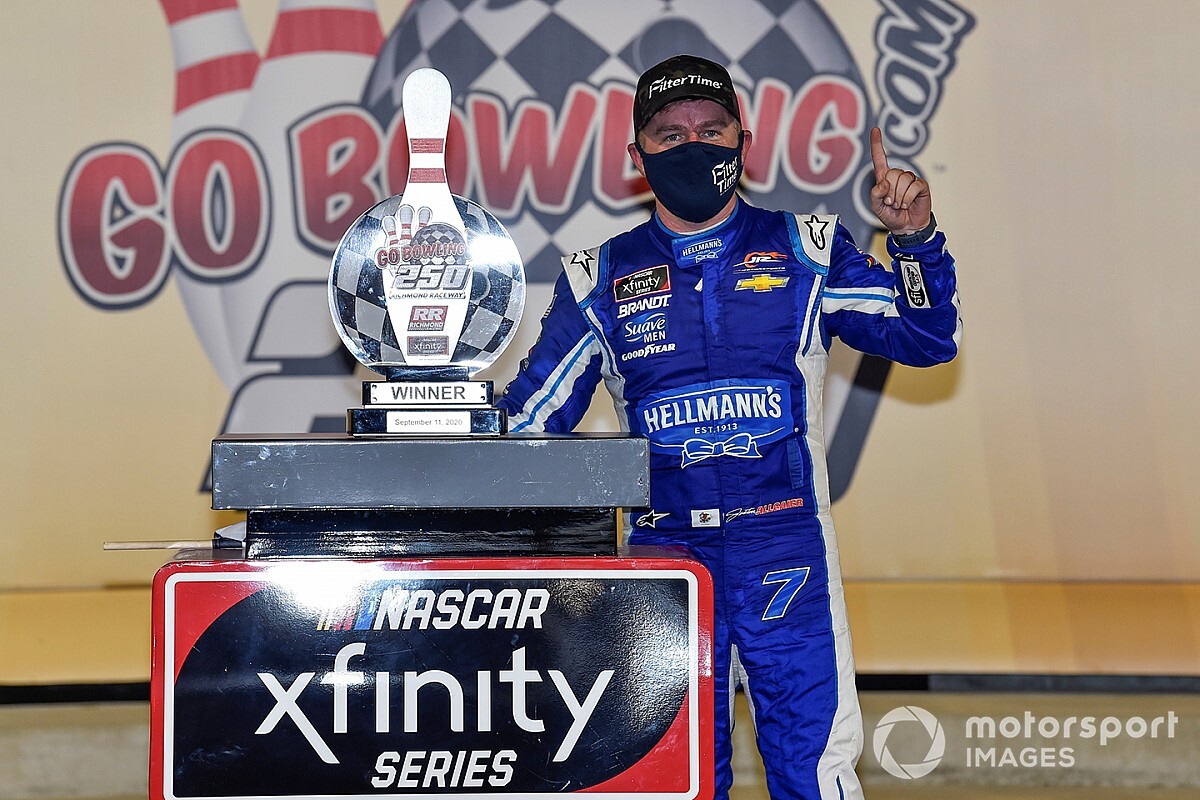 Allgaier ran down Justin Haley with 29 of 250 laps remaining and easily held on for the victory in Friday night’s Go Bowling 250 at Richmond (Va.) Raceway, picking up his second win of the 2020 NASCAR Xfinity Series season.

Both of Allgaier’s wins have come in the last five races as the series is about to kick off its 2020 playoffs. It’s also the 13th win of his career.

“Tonight was definitely a push to the end,” Allgaier said. “I feel like we’ve had so many get away here and we’ve just not been able to seal the deal. It’s been frustrating.

“I can’t be more be more excited about tomorrow. I got damage early (in the race) and I feel bad and I had to make up for the damage early.

“The win tonight was all about these guys. We’re going to celebrate quickly so we can turn it around and be ready for tomorrow.”

The victory in Friday night’s first race of the weekend doubleheader race means Allgaier will start 15th in Saturday afternoon’s race. Tommy Joe Martins will start on the pole.

Kyle Busch finished third and uncharacteristically never led a lap – the first time that’s occurred in an Xfinity race since 2018. Austin Cindric was fourth and Ross Chastain rounded out the top-five.

Following the break between Stages 2 and 3, the lead-lap cars all pit with Allgaier the first off pit road. He led the way on the restart on Lap 158.

On Lap 168, Haley got around Cindric to move into the runner-up spot, less than a second behind Allgaier.

On Lap 174, Haley cleared Allgaier off Turn 2 to reclaim the lead in the race.

With 50 laps remaining in the race, Haley had expanded his lead over Allgaier to 2 seconds with Busch in third.

On Lap 221, Allgaier was able to run down and catch Haley and got around him to reclaim the lead. Busch remained in third, more than 2.5 seconds behind the leader.

With 20 laps to go, Haley remained close behind Allgaier with Busch third, Cindric fourth and Chastain in fifth.

Allgaier had expanded his lead to almost a second over Haley with 10 laps remaining.

Allgaier easily held off Chastain for the Stage 2 victory, his ninth stage victory of the 2020 season.

Following the break between Stages 1 and 2, all the lead-lap cars elected to pit with Cindric the first off pit road.

On the restart on Lap 84, Cindric was followed by Chase Briscoe and Chastain.

Allgaier got around Chastain on Lap 94 to move into the runner-up position behind Cindric.

With 50 laps to go in Stage 2, Cindric held a 1.2-second lead over Allgaier while Busch had moved to third.

Allgaier had closed to within half-a-second of Cindric with 30 laps remaining in the second stage. Busch remained closed behind in third.

On Lap 124, Allgaier was finally able to clear Cindric to take the lead for the first time in the race. Chastain had gotten around Busch and moved back into third.

Chastain moved into the runner-up spot on Lap 129 as Cindric dropped back to fourth in the running order.

With 10 laps to go in the stage, Allgaier had expanded his lead over Chastain to 1.7 seconds as Busch remained in third.

Cindric ran down fellow Ford driver Briscoe to grab the lead and held on to take the Stage 1 victory, his 10th stage win of the 2020 season.

Chastain was third, Haley fourth and Allgaier rounded out the top-five.

Chastain, who started on the pole, took early command of the race, leading the first 38 laps.

On Lap 15, Colby Howard stalled his car against the wall in Turn 4 to bring out the first caution of the race. On the restart on Lap 24, Chastain continued to lead the way followed by Burton.

Cindric got around Harrison Burton for the second spot shortly after the restart.

On Lap 33, Haley powered around Cindric to move into the runner-up spot behind Chastain.

On Lap 39, Haley grabbed the lead, going to the inside of Chastain off Turn 2.

NASCAR displayed a competition caution on Lap 41 to allow teams to check tire wear. Some teams elected to pit but Burton stayed out and inherited the lead. On the restart on Lap 46, Burton was followed by Jones.

Myatt Snider spun and wrecked on the backstretch after the restart as drivers went four-wide. Chastain also suffered some rear-end damage when Haley got into the back of him.

The race returned to green on Lap 53 with Burton still out front and Brandon Jones in second.

Busch moved into second on the restart only to see Briscoe clear both Busch and Burton to take the lead on Lap 54.

On Lap 59, Cindric went to the inside of Briscoe and cleared him to take the lead for the first time in the race.

With less than 10 laps remaining in the stage, Cindric had built nearly a one-second lead over Briscoe with Chastain in third.

Justin Allgaier will return to JR Motorsports in 2020