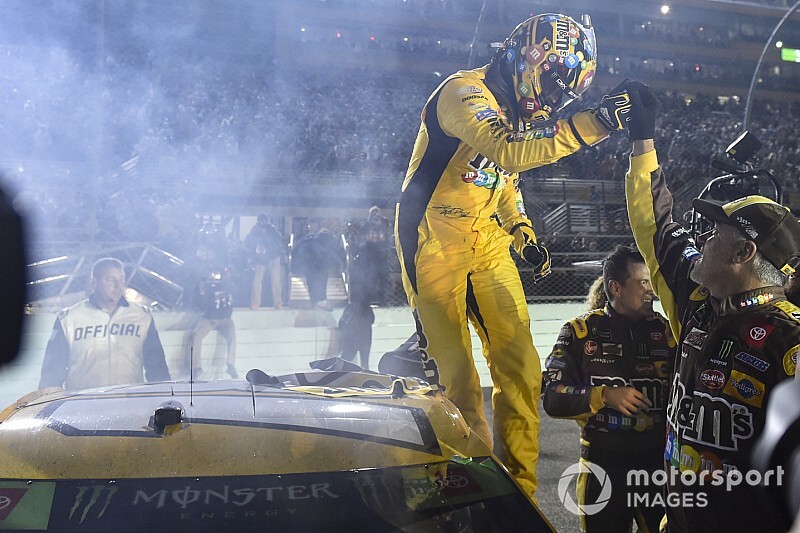 Kyle Busch is now cashing in on all the NASCAR Cup Series championship opportunities he’s earned the last half-decade.

After stumbling through the playoffs, Kyle Busch saved his best for last, winning Sunday’s Ford 400 at Homestead-Miami Speedway which handed him his second career Cup Series championship.

The title is the second of Busch’s career. His previous title came in 2015, which started a run of five consecutive seasons of making the Championship 4.

“Great job guys!” Busch yelled over his team radio as he took the checkered flag.

Busch, 34, cycled back into the lead following a round of green flag pit stops with 45 of 267 laps to go and was able to maintain a solid margin over his Joe Gibbs Racing teammate, Martin Truex Jr., winning by 4.578 seconds at the finish.

It’s the fifth win of the season for Busch, but his most recent victory came in June at Pocono.

Until Sunday, his best finish in the playoffs was last weekend at Phoenix, when he was runner-up to his Joe Gibbs Racing teammate, Denny Hamlin.

"Yeah, we have a great race team and a great owner, even the best sponsor in sports. I just can't say enough, thank everyone enough for this opportunity," Busch said. "I may be the one that's able to hoist the trophy or have a championship, but it wouldn't be possible without Adam Stevens, Coach Joe Gibbs, J.D. Gibbs, Coy Gibbs, the whole family.

Asked about winning this title in the year team president J.D. Gibbs died in January, Busch said, "I know it's been a difficult time on Melissa and Joe. To be able to reward them with a championship, I don't know how much it means to them, but it's the best I can do.

"I know J.D. was looking down on us all year long. I mean, damn, what a season Joe Gibbs Racing put together. For as awesome as our group is, everybody back in the shop, how awesome they are at building some really, really special race cars. We put it on them this time."

Even in his struggles late in the season, Busch believed "you just never give up."

"That's what's so special about Homestead‑Miami Speedway, is the ability to put on a show. I felt like we did that there racing those guys. I know it kind of dulled out towards the end. It was exciting enough from my seat."It was a lot of fun to cap off such an amazing year."

Erik Jones finished third in the race, Kevin Harvick was fourth (and third in the title race) and Joey Logano rounded out the top-five.

Following the break between Stages 2 and 3, all of the lead-lap cars pit with Kyle Busch once again the first driver off pit road.

On the restart on Lap 167, Busch was followed by Harvick, Truex, Hamlin and Kyle Larson.

Hamlin powered to the lead on the restart only to see Kyle Busch take it back on the frontstretch two laps later.

After 171 laps, all four title contenders once again ran in the top four spots.

On Lap 174, Harvick passed both Truex and Hamlin to move into the second position, less than a second behind leader Kyle Busch.

Hamlin got back around Harvick to retake second on Lap 177.

With 80 laps remaining in the race, Kyle Busch had moved out to a 2.3-second lead over Hamlin. Harvick ran third, Truex fourth and Larson rounded out the top-five.

Truex got around Harvick on Lap 197 to take third as his spotter told him, “Let’s go get the 11 (Hamlin)” over his team radio.

With 60 laps to go, Kyle Busch continued to maintain a 2.4-second lead over Hamlin, with Larson in third.

On Lap 209, Larson dove down to pit road, among the first to make a green-flag pit stop for tires and fuel to make it to the end of the race.

With less than 50 to go, Hamlin said his No. 11 Toyota was overheating and he was afraid he would not make it to the finish of the race. He finally pit under green on Lap 223.

Once Hamlin returned to the track, he was running 19th and one lap down.

With 45 laps to go, Kyle Busch cycled back around into the lead as Harvick finally pit.

After 230 laps, Kyle Busch had moved out to an 8-second lead over Truex. Harvick was 13th and Hamlin was 18th, one lap down.

With 35 laps remaining, Kyle Busch continued to hold a 7 second lead over Truex. Harvick had moved up to seventh and Hamlin ran 14th, one lap down.

Busch’s lead over Truex held at just over six seconds with 15 laps to go in the race. Truex – the closest title contender – complained his No. 19 Toyota was extremely tight.

On Lap 255, Hamlin was able to pass Busch and put himself back on the lead lap and in the 10th position.

Kyle Busch’s lead had stabilized at about 4.5 seconds with five laps to go.

Truex: "One mistake probably cost us a shot at it"