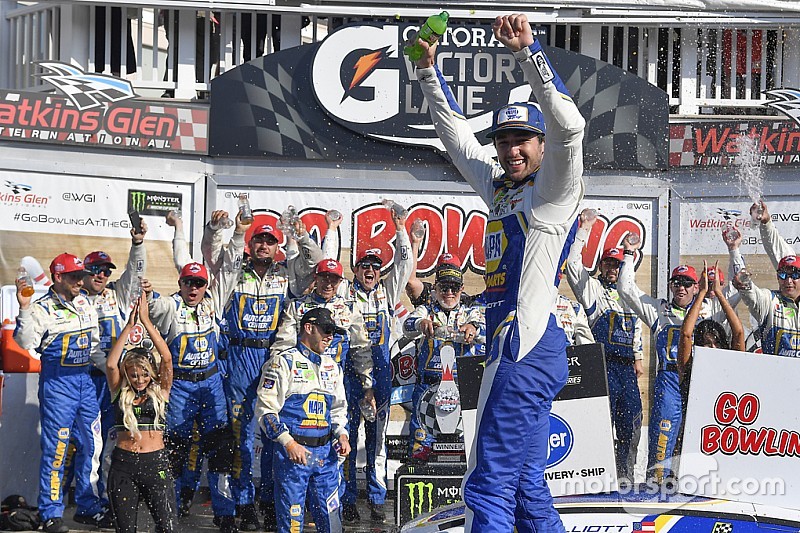 In almost an exact replay of a year ago, Elliot deftly held off a furious charge from Truex, answering every challenge over the final 50-lap final stage.

The win is Elliott’s second of the 2019 Monster Energy NASCAR Cup Series season and fifth of his career – all coming in the last 12 months.

"This is wild. Thank you guys, that was pretty awesome. I've never been so far from home and thought I was at my house," Elliott said to the cheers from the fans. "Thank you. What a day.

"We had such a bad fast Camaro and we stayed mistake-free. Martin was a little quicker those last two runs but track position was king and I didn't mess up in (Turn) 1 this time, so that was good.

"I just want to thank everyone that makes this happen. Mr. (Rick) Hendrick is here today and just a lot of people that have obviously gotten me to this point. I wish my mom and my grandmother were here today but I can't wait to see you guys - love you!

"Sorry I ran out of gas again! You guys are awesome."

Following the break between Stages 2 and 3, some drivers pit but Elliott remained on the track and in the lead when the race returned to green on Lap 44.

Truex stayed close to Elliott on the restart as he tried to catch the leader in a battle that was reminiscent of last year’s race.

By Lap 48, Elliott had been able to sustain a small lead over Truex but couldn’t pull away like he had earlier in the race.

With 40 lap remaining in the race, Elliott had built almost a 1-second lead over Truex with Harvick in third, more than 6 seconds behind the leader.

Ryan Newman ran off course in Turn 5 and suffered a flat right-front tire, but was able to limp around the track and back to pit road.

On Lap 53, Daniel Hemric spun off the inner loop and suffered a lot of damage to his No. 8 Chevrolet but was able to continue on to pit road.

After 55 laps, Truex had closed to Elliott’s rear bumper again to challenge for the lead. Harvick remained in third, more than 9 seconds behind the lead.

Harvick was the first to make his final pit stop on Lap 58 as the window opened for drivers to make it to the end of the race on fuel.

Elliott elected to pit on Lap 60 which allowed Truex to move into the lead for the first time in the race. Truex pit one lap later.

On Lap 62, caution was displayed after Jimmie Johnson severely damaged his No. 48 Chevrolet and did damage to the retaining wall.

At the same time, Bubba Wallace and Kyle Busch hit each other several times on the frontstretch with Wallace finally turning Busch into Turn 1.

Paul Menard, who had been leading, made his pit stop under the caution which put Elliott back in the lead on the restart on Lap 66. He was followed by Truex, Hamlin, Harvick and Jones. Kyle Busch lined up 35th.

On Lap 68, Elliott was concerned he may have a left-rear tire going down and his team was attempting to visually inspect the tire. He continued to maintain a lead over Truex.

With 20 laps remaining, Elliott held a small lead over Truex with Hamlin in third. They were followed by Jones and Harvick.

After 75 laps, Elliott’s lead over Truex hovered around sixth-tenths of a second. Hamlin remained in third, Jones fourth and Blaney had moved up to fifth.

With 10 laps to go, Truex had closed again to Elliott’s rear bumper but still couldn’t get close enough to attempt a pass for the lead. Hamlin was third, more than 6 seconds behind the leader.

With five laps remaining, Truex had again closed to Elliott’s rear bumper to challenge for the lead.

Truex: "Wish we could have been just a tiny bit better"