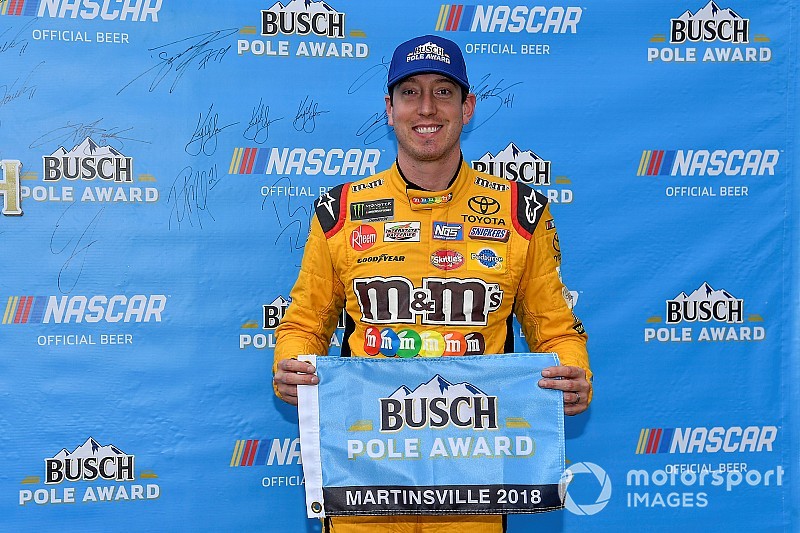 Kyle Busch will start the semifinal round of the Monster Energy NASCAR Cup Series playoffs in the best position possible.

Running multiple laps in the final five-minute round of knockout qualifying on Saturday, Busch was able to knock Clint Bowyer from the top spot and won the pole for Sunday’s First Data 500 at Martinsville (Va.) Speedway.

Busch ended up with an average lap speed of 96.254 mph, which was the fastest lap recorded all day.

“We’ve been good here that last couple of years and especially this time of year,” said Busch, who used a victory in this race one year ago to lock himself in the Championship 4 at Homestead, Fla.

“We’ve had good speed since we’ve been here. We’ve just been trying to fine-tune the balance to get that much better. We were close in the spring – we were second-best. We want to be first-best, though, and automatically advance through.”

The pole is Busch’s fourth of the year and 31st of his career.

Kurt Busch led the way in the 10-minute second round with an average lap speed of 96.161 mph.

Also advancing to the final round were Suarez, Larson, Truex, Blaney, Byron, Keselowski and Logano.

Logano went out very late in the session and knocked playoff driver Kevin Harvick out of the Top 12. He will line up 13th in Sunday’s race.

Also failing to advance to the final round were three members of Hendrick Motorsports – Alex Bowman, Chase Elliott and Jimmie Johnson. Elliott will line up 21st on Sunday, lowest of the eight remaining playoff drivers.

Elliott has won two races in the playoffs so far, including last weekend at Kansas Speedway.

Blaney had the fastest average speed in the first round as Fords swept the top-five positions.

Rounding out the Top 10 were Hamlin, McMurray, A.J. Allmendinger, Larson and Ryan Newman.

Among those who failed to advance to the second round were Ross Chastain, Matt Kenseth, Austin Dillon, Ty Dillon and Darrell Wallace Jr.

Just over eight minutes into the first round, Wallace spun entering Turn 3 and slammed into the Turn 4 wall, doing significant damage to the No. 43 Chevrolet.

Wallace’s Richard Petty Motorsports team immediately brought out its backup car, which means Wallace will have to start from the rear of the field in Sunday’s race.