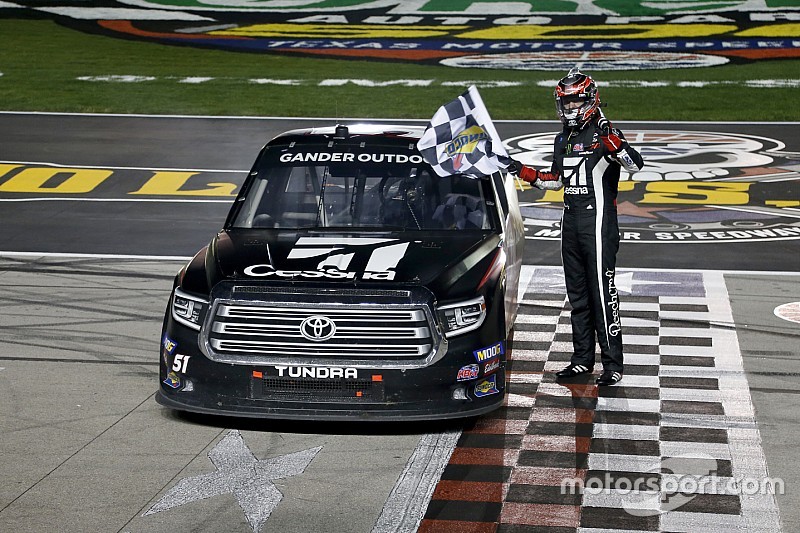 Make it four-for-four for Kyle Busch in the NASCAR Truck Series this season with one start remaining.

It wasn’t an easy ride, but Busch held off a furious challenge from Stewart Friesen and hung on to win Friday night’s Vankor 350 at Texas Motor Speedway.

Busch has now won all four Truck Series races he’s entered this season and collected his 55th career victory. Busch can run one more Truck race this season under NASCAR rules, which will be the May event at Charlotte Motor Speedway.

"The No. 24 (Brett Moffitt) was who I was really worried about and then something happened to him and then (Stewart Friesen) was really fast and on our tailgate the whole finish of that race until about the last five laps," Busch said.

"I don't know if he just got heated up or what back there. He put up a good fight and about got to me a couple times there and fortunately I was able to hold out and keep this truck up front. We just lacked a little bit of overall speed tonight and we didn't have exactly what we wanted.

"Those guys were able to keep up with us just way too much throughout the night. You know, it's a better race that way when they're able to keep up. That means we need to go to work and work harder in order to get ourselves faster."

With 50 of 147 laps remaining, Busch and Brett Moffitt were nose-to-tail while Ben Rhodes was nearly three seconds behind the leader.

On Lap 99, Moffitt went to the outside of Busch in Turns 1 and 2 to take the lead for the first time in the race.

Korbin Forrister wrecked off Turn 2 on Lap 103 to bring out a caution. All of the lead-lap cars elected to pit with Busch the first truck off pit road. When the race restarted on Lap 110, Busch was followed by Matt Crafton, Tyler Ankrum and Ross Chastain.

Codie Rohrbaugh wrecked off Turn 2 on Lap 117 which brought out another caution. On the restart with 25 laps remaining, Busch was out front followed by Friesen, Moffitt, Crafton and Enfinger.

With 20 laps to go, Friesen moved into second behind Busch as Moffitt fell off the pace after suffering damage from a run-in with Rhodes.

With 10 to go, Friesen remained within striking distance of Busch with Sauter moving into third.

Busch held off a fast-approaching Crafton to claim the Stage 2 victory.

Rhodes was third, Chastain was fourth and Friesen had made his way up to fifth.

Following the break between Stages 1 and 2, Enfinger was the first off pit road but had to restart the race from the rear of the field for having a crew member over the wall too soon on his pit stop.

Busch and Crafton elected not to pit and restarted first and second when the race went green on Lap 43.

On Lap 49, Anthony Alfredo wrecked off Turn 2 and fire engulfed his truck. Alfredo quickly got out of the truck and was unhurt. A red flag was displayed by NASCAR to clean the track of debris.

When the race returned to green on Lap 57, Busch remained in the lead followed by Crafton and Chastain.

With 10 to go in the stage, Busch held a small lead over Crafton with Rhodes moving up to third.

Daytona winner Austin Hill was forced to pit under green to deal with an overheating engine.

Busch’s lead expanded to over one second with five laps to go.

After taking the lead with four laps remaining, Enfinger just edged Rhodes to earn the Stage 1 victory – his first stage win of the season.

Enfinger, who started on the pole, led the first two laps before turning the lead over to Moffitt.

On Lap 3, Todd Gilliland spun and hit the frontstretch wall to bring out the first caution. The race returned to green on Lap 9 with Moffitt in the lead.

On Lap 12, Harrison Burton got loose off Turn 2 and backed into the outside wall which brought out another caution.

The race returned to green on Lap 18 with Moffitt still in the lead followed by Busch and Creed.

Angela Ruch got into Gus Dean on Lap 19 to trigger another wreck and caution. Dean was able to drive off and head to pit road for repairs. The race returned to green on Lap 25 with Moffitt still in the lead followed by Busch and Rhodes.

Dean spun into the frontstretch grass with 10 laps remaining as the race again returned to caution. Busch, Crafton and Chastain were among those who elected to pit under the caution. The race returned to green with four laps remaining until the conclusion of the stage and Moffitt still in the lead.

Enfinger quickly got around Moffitt on the restart to take the lead for the first time.

Friesen and Josh Reaume had to start the race from the rear of the field – Friesen for an engine change and Reaume for unapproved adjustments.