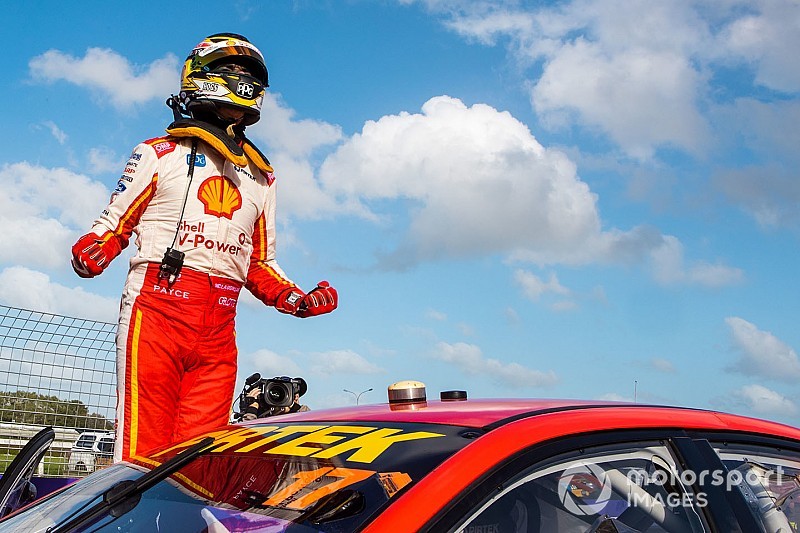 Scott McLaughlin says he's prepared to 'get some elbows out' during this weekend's Supercars title decider in Newcastle if needed.

The DJR Team Penske driver will face off against notoriously hard-nosed racer Shane van Gisbergen on the streets of Newcastle, in a winner-takes-all battle for the 2018 Supercars title.

The showdown comes off the back of a tense penultimate round of the season in Newcastle, which included a protest, team orders, a park-in, and warnings over setting a 'dirty pool' precedent.

Heading into Newcastle, McLaughlin says he's ready to do what it takes to seal the title – even if it means getting his elbows out.

"[Van Gisbergen] races how he races, and I race how I race," he said.

"At the end of the day, it's one of those things where I'll do what I need to do to win this championship.

"I'll work hard. And if it takes getting some elbows out I will, but if not I'm happy to race Shane fair and hard as we always do.

"There is no stress on that part, I think we proved last year coming back through the field, nearly getting back to a position where we could win the title, that we could pull out some good passes at a track that was really tough for passing.

"I'm excited, I think it's going to be an awesome showdown for Supercars."

McLaughlin, who heads into the weekend with a 14-point advantage over van Gisbergen, reckons he's a different driver to the one who lost the title to Jamie Whincup in spectacular fashion 12 months ago.

"Twelve months ago didn't really go to plan, but I feel like I'm a different driver since then," he said.

"I'm a lot more calm, and ready for this opportunity. I was a little but under the pump and a little bit shy of the situation [in 2017], I didn't really know what to expect.

"Now I'm heading in with a bit more experience to this point of the year, which is big for me. Our car is fast, we got a win and two poles there [last year]. Obviously Sunday didn't go to plan, but we were still very fast.

"I really enjoy the track, and whenever you enjoy a track it helps as well."

Van Gisbergen, meanwhile, has downplayed what's now perceived as a fierce rivalry between the two Kiwis based on what happened at Pukekohe.

“That’s probably one of my negatives, I don’t influence the media enough and they make up their own stories; I probably didn’t say enough about it,” the Triple Eight driver told the Supercars official website.

“It’s shit, but it makes the story so much bigger for Newcastle. Everyone has made a fake rivalry.

“I think it’s easy to forget how much Scotty and I respect each other and how much we enjoy racing each other.

“It’s been awesome to see him grow the last few years. I think Newcastle is going to be epic, no matter which way it goes. It’s been a really good season racing against him.”

Triple Eight hopes Lowndes finale is 'a pain in the arse'