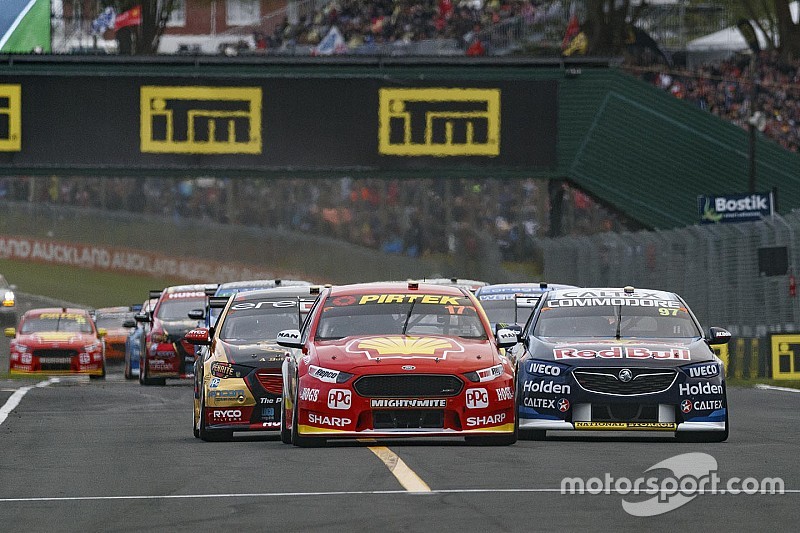 DJR Team Penske's protest against the decision not to penalise Shane van Gisbergen at Pukekohe sets a precedent Supercars team should avoid, according to Triple Eight team manager Mark Dutton.

Amid a tense title fight between Shane van Gisbergen and Scott McLaughlin, the two teams clashed at Pukekohe last weekend over a decision from the Deputy Race Director not to slap van Gisbergen with a drive-through penalty for wheel-spinning during a pitstop.

When a post-race investigation still found van Gisbergen not guilty, DJRTP chose to protest the DRD's decision. And while the protest was ultimately unsuccessful, T8 team manager Dutton was less than impressed that it happened in the first place.

According to Dutton the protest sets a precedent for nit-picking in the hope of penalties, with "dirty pool" something he says his team wants to avoid.

"I was actually a little bit surprised that the team chose to protest it, to be honest," said Dutton.

"As far as I know, and I could be wrong, but it’s the first time [a protest] for a non-technical regulation that didn’t involve that team’s car has happened.

"They’re not the type of precedents you want to set.

"I could name three [infractions] our direct opposition did this weekend, two of them were a drive-through and one was a disqualification from part of the weekend.

"But that’s dirty pool, we played it clean.

"We try and just go fast on track, try and do the best pitstops you can, and not worry about some of those rules. It just becomes the wrong culture if you encourage them.

"We definitely don’t. We’re not perfect, but we always try and improve."

Penske's protest at Pukekohe fell down based on T8's argument that the clutch wasn't engaged during the stop, and that there was a precedent for some wriggle room on movement less than a full rotation.

While not a universally popular outcome up and down pitlane, Dutton said he felt it was the right decision in terms of consistency.

"It’s an interesting one. All we ask for with those type of rules – we all say it, team managers, team owners, everyone says the same thing – is consistency," he said.

"Consistency was applied. People chose to question that. There was heaps of evidence to say that it was consistent as recently as Bathurst."

DJRTP managing director, meanwhile, admits he didn't expect the protest to be successful.

Speaking to the Fox Sports Motorsport podcast, Story explained that the protest was to try and clarify what is and isn't allowed with wheel-spinning.

"I didn't expect that we would be successful with our protest but I thought it was important to effectively test the result and the response," he said.

"What concerned me was that the evidence that was submitted indicating the precedent of not completing a full revolution, not being a penalty all related to David [Reynolds] at Bathurst and Adelaide.

"We found an incident from 2015 where less-than-a-revolution was completed and it was a penalty and another one from '17.

"And we found one particularly interesting one from Darwin in 2013 that involved Triple Eight and then Dutton getting on the tele and saying 'it was less than a revolution, but them's the rules, the wheels can't move and that's what a penalty is'.

"It is what it is and we'll move on from it. I think what it does is it now sets a precedent that everyone has a clear understanding of, whereas I don't think that was the case before."