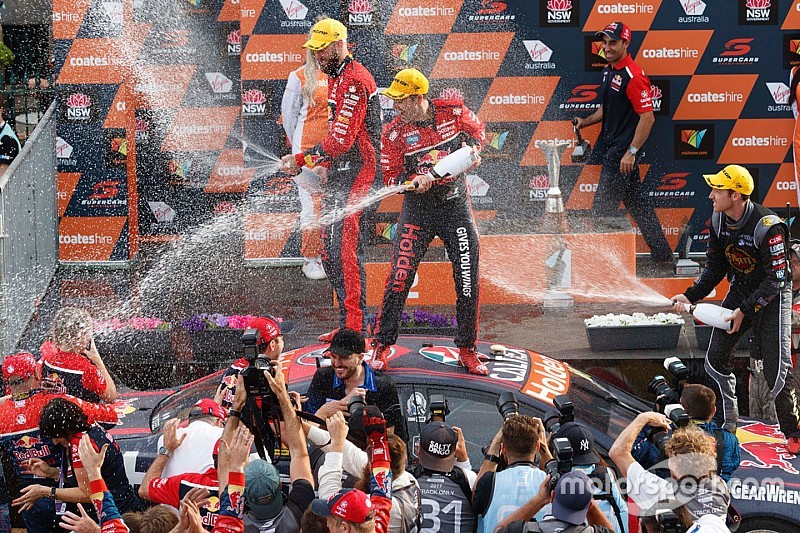 Jamie Whincup has sealed the 2017 Supercars title after a thrilling finale on the streets of Newcastle that saw Scott McLaughlin penalised three times.

The title fight boiled down to a breathtaking final race, which saw McLaughlin dumped outside the Top 20 twice thanks to penalties before being slapped with a post-race drive-through for a clash with Craig Lowndes on the penultimate lap.

It meant two fightback drives from the Penske driver, followed by an incredible battle for 11th with Lowndes over the final laps.

While McLaughlin crossed the line in the magic 11th required to win the title, a post-race drive-through penalty bumped him back to 18th.

That meant race winner Whincup was crowned Supercars champion for a seventh time.

"I didn't have a clue. I crossed the line and I assumed I'd come second [in the championship], and the crew goes 'you've got number one'," said Whincup.

"What a rollercoaster. We fought hard, didn't have the quickest car all year but it's all about team work. Sport's all mental. I'm rapt, couldn't be happier.

"Massive thanks to the whole #17 crew, they stepped up this year and gave us an unbelievable fight. Commiserations to them. No doubt Scotty will go on and win the next eight."

McLaughlin led the opening stint of the race, keeping van Gisbergen at bay by around three quarters of a second until the pair both pitted on Lap 14.

They came out even closer than that, van Gisbergen needing to get out of the throttle to avoid contact in pitlane. But within seconds of the pair re-joining the race, the battle was cut short when McLaughlin was slapped with a drive-through for speeding in the lane.

The penalty dropped McLaughlin outside the Top 20.

In the mean time Reynolds jumped into the lead as the first stops shook, having undercut the three guys that had been running ahead of him in the early stages of the race.

As the second stint wore on Reynolds worked hard to keep van Gisbergen behind him, while Jamie Whincup crept into the game as he snuck up on the leading pair.

On Lap 33 the lead changed hands, a small lock-up from Reynolds enough to let van Gisbergen by at the hairpin. No sooner had he dropped back to second, Reynolds had mirrors full of Whincup, the #88 Red Bull Holden driver on a desperate charge for points.

While Whincup couldn't get by Reynolds on the road, his title hopes were still given a massive boost at the back end of the second stint. Once again it was thanks to McLaughlin being hit with a penalty, but this time it was due to an on-track scuffle, the Kiwi tagging Simona de Silvestro while fighting back through the field.

Incredibly, the contact came as McLaughlin was trying to wrangle 11th spot off of de Silvestro, the exact position that he needed to seal the title.

The clumsy contact meant he was held for 15-seconds when he served his second stop on Lap 49, which dropped him back outside the Top 20 with just a single stint to go.

To make matters worse for McLaughlin, Whincup jumped Reynolds during the second stops, opening the door for Triple Eight to shuffle its drivers if needed.

There was a slight reprieve for the points leader on Lap 54 when Taz Douglas slapped the wall and sparked the race's first Safety Car. It compressed the field, and put McLaughlin 16th at the restart with 38 laps to go.

Two laps after the restart, Whincup was into the lead of the race after being let through by van Gisbergen. McLaughlin had already made one spot, and needed four more to bag the title.

With 31 laps to go 15th became 14th, McLaughlin sliding past James Courtney with his front-right locked. Two laps later it was 13th, Scott Pye waving the Penske Ford past.

With 25 laps to go the Safety Car emerged again, this time so some debris could be cleared from the track. That meant McLaughlin could close right on the back of the two GRM Commodores, the last two cars he needed to pass to secure the title.

When the race restarted with 22 laps to run, there was more drama for McLaughlin. He found himself in the back of Garth Tander at Turn 1, which allowed Pye to barrel back into 13th and led to Jason Bright climbing over the left-rear of McLaughlin's Ford and peeling off the rear guard.

This time he got away with it; he was cleared of any wrongdoing, quickly back in 13th, and no terminal damage.

The next issue was a hard-charging Craig Lowndes, who had stopped and taken on fresh rubber during the final Safety Car. His extra pace meant he was able to close up on McLaughlin with a little over 10 laps to go, threatening to drop the contender back another spot right when he needed to be moving forward.

With mirrors full of Lowndes, McLaughlin made it a one-pass race with five laps to go when he passed Tander. Lowndes followed him through, and then did likewise at the end of Lap 93 when McLaughlin finally got past Moffat and into that key 11th with two laps to go.

By the time the pair got to Turn 2 on Lap 94 there was another twist in the tale. With Lowndes getting a run on McLaughlin, the pair clashed as McLaughlin moved left to cover his line.

Lowndes hit the wall and went flying into the tyres on the outside of Turn 2. McLaughlin crossed the line 11th but was hit with a post-race drive-through and dumped to 18th.

That meant race winner Whincup sealed a seventh title, with a 4.4s margin over van Gisbergen at the finish.