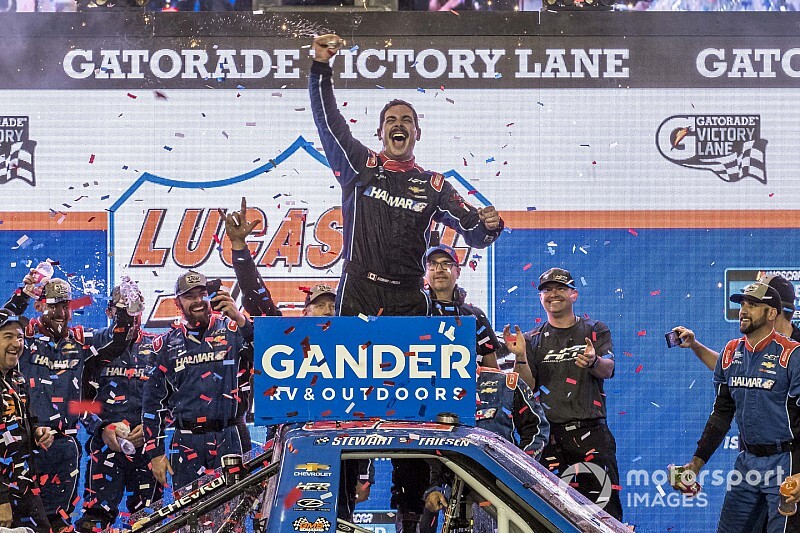 Stewart Friesen started the race with a penalty and ended with a victory and chance at a NASCAR Trucks championship.

Friesen was black-flagged for jumping the start of the race but bounced back to grab the lead late in Friday night’s Lucas Oil 150.

He then held off a furious challenge from Brandon Jones to pick up the win at ISM Raceway near Phoenix to lock himself into the Championship 4 next weekend at Homestead.

Joining Friesen in competing for the 2019 series title next weekend at Brett Moffitt, Matt Crafton and Ross Chastain.

The win is Friesen’s second of the season and second of his career. He won earlier this year at Eldora Speedway.

“Great race team, great spotter,” Friesen said when asked how he came back to win the race. “I think (Austin Hill) spun his tires (at the start). I don’t know what we could do. It is what it is.

“Had such a great race car – we were able to pass them all, pass them all clean. We’re going to party this one up tomorrow.”

Asked about having the chance to compete for a series championship, Friesen said: “It’s awesome. We’ve been geared up for this all year long. We lost races every which way you could lose them and almost lost another one tonight.

“Great race car, great race team, thanks to all these guys. This one’s for everybody. We’ll do a little celebrating tomorrow and then it’s ‘game on.’ We’ve got a bad-ass piece for next week, too.”

Chandler Smith finished third in the race, Ben Rhodes was fourth and Grant Enfinger rounded out the top-five.

With 30 of 150 laps remaining Friesen held a small lead over Jones but Jones continued to remain close with Smith 2.4 seconds behind in third.

After 145 laps, Jones got to the rear bumper of Friesen to challenge for the lead but could not complete a pass before the checkered flag.

Jones held off playoff driver Crafton to win Stage 2, his second stage victory of the season.

Following the break between Stages 1 and 2, most of the lead-lap trucks elected to pit but Sheldon Creed remained on the track to inherit the lead.

On the restart on Lap 54, Creed was followed by Jones and Burton. Chastain was the first truck off pit road and lined up sixth.

Tyler Ankrum was penalized for too many men over the wall during his stop and had to restart from the rear of the field.

With 25 laps remaining in the stage, Jones worked his way around Rhodes to take the lead for the first time in the race. Crafton remained in third.

By Lap 73, Crafton had moved into second and Smith into third.

Friesen, who began the race getting black-flagged for jumping the start, moved up to fourth by Lap 76.

With 10 to go in the second stage, Jones’ lead over Crafton had built to 1.4 seconds as Smith ran third, 2.7-seconds behind the leader.

Rhodes held off Smith to take the Stage 1 win, his third stage victory of the season.

Friesen grabbed the lead on the start but NASCAR quickly indicated it was reviewing the start. Before it could finish, Jones wrecked in Turn 2 on Lap 2 to bring out a caution.

NASCAR black-flagged Friesen for the start violation and sent him to the rear of the field as Rhodes inherited the lead under caution.

On the restart on Lap 7, Rhodes was followed by Austin Hill and Creed.

After 15 laps, Rhodes had moved out to a 1.8-second lead over Creed with Smith having moved up to the third position.

On Lap 23, Derek Kraus hit the wall in Turn 3 to bring out another caution. Several lead-lap trucks elected to pit but Rhodes remained in the lead on the restart on Lap 29.

With 10 laps remaining in the first stage, Rhodes held a small but steady lead over Smith with Crafton in third.

Both Ty Majeski (engine change) and Burton (unapproved adjustments) had to start the race from the rear of the field.