Earlier this week Hyundai announced Adamo has stepped down from his role after six years at the helm, citing personal reasons for his departure.

Adamo enjoyed a successful tenure at Hyundai, leading the marque to back-to-back WRC manufacturers' titles in 2019 and 2020 on top of successes in the FIA WTCR series with Gabriele Tarquini and Norbert Michelisz in 2018 and 2019.

Hyundai president Scott Noh has been installed as team principal on an interim basis while the German-based outfit searches for a successor to the likeable Italian.

Following the news, Hyundai's WRC drivers have been quick to praise Adamo for his efforts as Hyundai boss.

Ott Tanak, who joined Hyundai last year after winning the 2019 WRC title with Toyota, posted an emotional tribute to his former boss.

"He gave his everything for Hyundai Motorsport but also took care of us like his own children.

"He put together an amazing team and now it is our job to bring the trophy back next year! I am also grateful to have such a great friend." 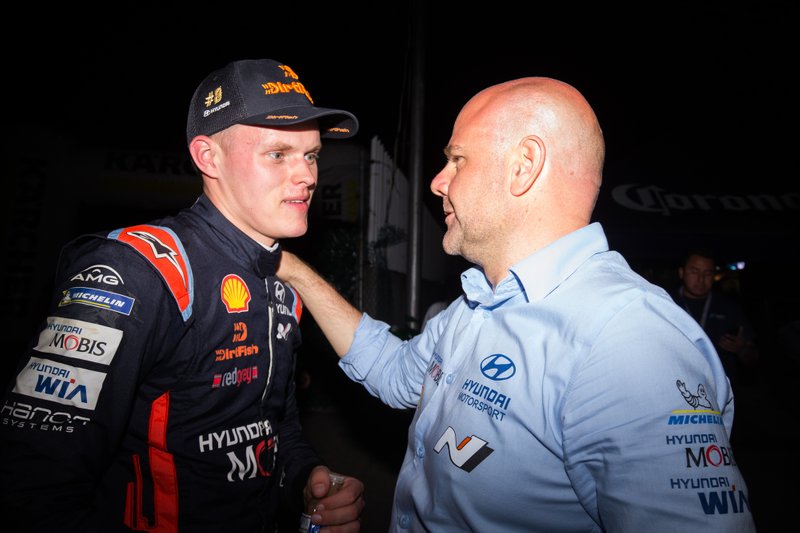 Teammate Thierry Neuville also took to social media, adding: "We've had some incredible years with Andrea as team boss and I have enjoyed working with him immensely.

"He was always there for us and we had a lot of great emotions together.

"I totally respect your decision and wish you all the best for the future my friend. We will miss your hugs."

Rally veteran Dani Sordo highlighted Adamo's ability to extract the best from him in the team's third car, ending a six-year drought by winning the 2019 Rally Italy and repeating his success on the event in 2020.

"Thanks for your support and confidence, boss," read a post from Sordo.

"For pushing me to give the maximum. All the best in this new stage. Big hug, my friend."

Oliver Solberg, who Adamo promoted to a WRC drive sharing the third car with Sordo for next year, also aired his gratitude for helping ignite his rally career, having made his full WRC debut with Hyundai this season.

"Mr Adamo, I want to say a big thank you for all the fantastic opportunities and support (and hugs!) you gave me this year, and wish you all the best for the future," wrote Solberg. "See you around!"