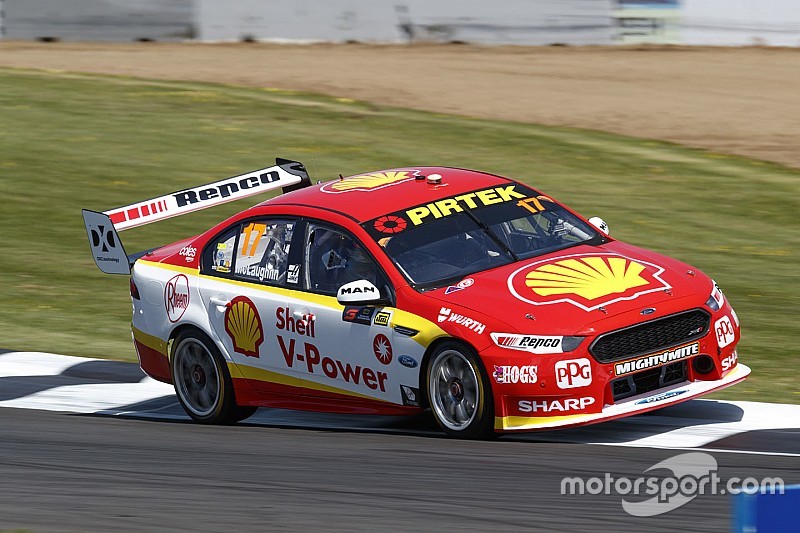 The Penske Ford driver stormed clear of the field with a 1m02.570s midway through the 20-minute session, van Gisbergen then falling 0.1s short with a last-gasp effort in tricky conditions.

It was van Gisbergen that set the early pace, diving straight into the twos with a 1m02.931s on his very first run as the rest of the field languished in the threes.

McLaughlin then put in an impressive two-lap run right at the mid-point in the session, going quickest by just over a tenth before stretching the margin to almost four-tenths with that 1m02.570s second time around.

At the same time Chaz Mostert joined the battle for pole, splitting the title contenders with a 1m02.931s.

The session was briefly red-flagged shortly afterwards, thanks to Simona de Silvestro beaching her Nissan on the outside of Turn 4.

The restart with eight minutes to go coincided with light rain falling on the back straight, however that didn't stop David Reynolds jumping into second with a 1m02.811s.

Van Gisbergen also made a small gain on his next run with a 1m02.965s, although it wasn't enough to overhaul Mostert in third. The Red Bull Holden driver did then make a more meaningful gain on his final run, jumping to second with a 1m02.688s.

McLaughlin, meanwhile, didn't even bother doing another run after the stoppage, the Kiwi's confidence that his earlier lap would be enough proving right by the tune of a tenth.

“The car’s awesome, we got in there just before the rain. I feel like we made an improvement,” said McLaughlin.

“I gave myself a kick up the arse yesterday and I thought, these guys gave me an awesome car, made it straight again. This is all for them.

“Me and Shane have been battling all year. I knew he was going to come back pretty hard there. It’s going to be an awesome battle, I’m pumped for it.”

Reynolds ended up third ahead of Mostert and Jamie Whincup, while Nick Percat ended up sixth despite swiping the Turn 4 wall late in the session.