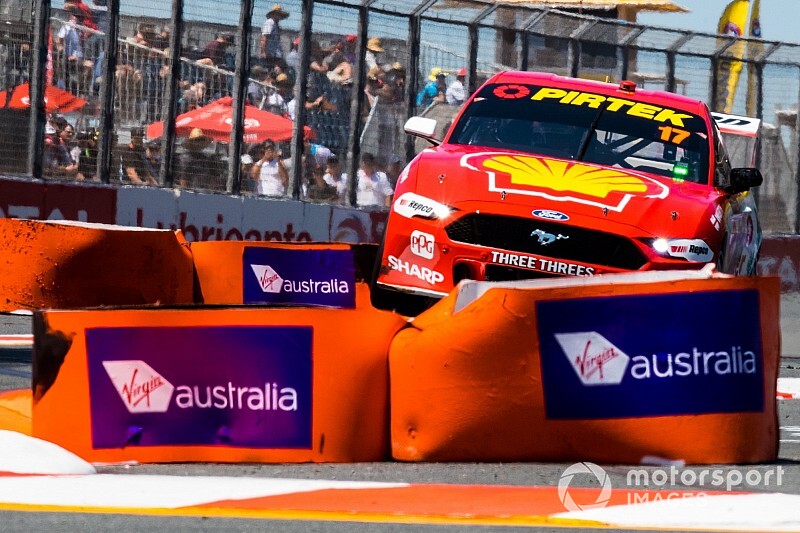 Scott McLaughlin has secured pole for the first leg of the Gold Coast 600, while Chaz Mostert may well miss today's race after crashing heavily in the Top 10 Shootout.

Having felt he over-drove his Penske Ford in regular qualifying, McLaughlin was sublime in the single-lap dash for pole.

His 1m10.078s was almost half a second faster than he went this morning, and ultimately left him 0.17s clear of next-best Jamie Whincup.

“I just had to have a big think about it and realised I needed to stop over-driving it,” he said.

“I’m glad Chaz is alright, that was a big lick. I hope his team can get back out there.

“But stoked for our team, the car has been good all weekend, I’ve just been driving really badly.”

It was a horror session for provisional polesitter Mostert, heavy contact with the wall leaving him in serious doubt for the rest of the weekend.

Looking to chase down McLaughlin's time, the Tickford star grazed the inside wall at Turn 11, which fired his Mustang hard into the concrete on the outside of the corner.

Not setting a time means he's listed as ninth on the grid for today's 300-kilometre opener, however it's currently unclear if the car is repairable.

Whincup will start the race from the outside of the first row, marking a two-spot improvement on his regular qualifying effort.

Red Bull Holden teammate Shane van Gisbergen went one spot backwards, dropping from second to third after small lock-up into Turn 11, with Cam Waters set to line up on the outside of the second row.

James Courtney will start from 10th, a kerb strike meaning he didn't set a time.

V8 engines to power SuperUtes in 2020