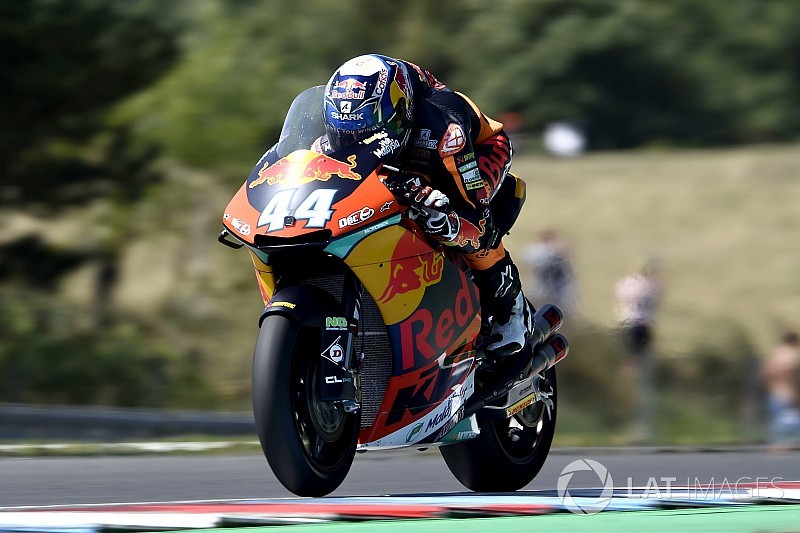 The victory was contested among several riders, with four of them, Oliveira, Marini, Francesco Bagnaia and Lorenzo Baldassarri split by 0.745 seconds at the finish.

Polesitter Marini, his teammate Bagnaia and Oliveira were the early contenders, the trio constantly trading the lead  before Bagnaia settled in at the head of the field for several laps.

Baldassarri soon broke the status quo by carving his way through the top three, and taking the lead on lap 13 of 19.

Marini also passed Baldassarri, who then started to fight with Bagnaia for third, as Marini put increasing pressure on Oliveira.

On the last lap, Oliveira ran wide at Turn 1, which allowed Marini through and the Portuguese rider unsuccessfully tried to fight back at both T3 and T10 before he made a move stick into the T11 left-hander.

Marini was able to go side-by-side at the final chicane, but Oliveira had the better line out of the last corner and took the win by 0.070s.

Bagnaia ended up taking third ahead of Baldassarri while Xavi Vierge, who shadowed the top four but lost pace late on, settled for fifth.

Brad Binder took sixth on the second Ajo KTM ahead of Marcel Schrotter and Jorge Navarro, as Sam Lowes made a late move on Mattia Pasini for ninth.

By taking his second win of the season, Oliveira took the championship lead, with Bagnaia now two points behind.

Alex Marquez crashed at the final turn just after passing Oliveira for third, as his Marc VDS teammate Joan Mir was involved in a violent crash on the opening lap.

Mir crashed with Tech 3 duo Bo Bendsneyder and Remy Gardner, the future Suzuki MotoGP rider's bike landing on the former, but all three walking away from the incident.

Alex Marquez to remain in Moto2 for 2019