Gabriele Tarquini has an unenviable Formula 1 record for the most failures to qualify. But the Italian's spirit remained undiminished, which explains in part why the tin-top ace is only now retiring, aged 59. Anthony Peacock visited him at his apartment for a feature in the 31 January 2013 issue of Autosport magazine to understand his enduring love for racing

By:
Anthony Peacock
, Journalist
Listen to this article

One of the funniest things some racing drivers do is earnestly claim that the only real reason they moved to - insert name of salubrious tax haven here - was because of the mountains/sea/lake/weather/low crime rate (delete as appropriate). Perversely, these same people are often still described as "favourite sons" of whichever place they were born, even thou they would obviously never dream of ever setting foot there again.

Which is what makes Gabriele Tarquini somewhat different. He was born in Giulianova - halfway down the eastern coast of Italy, more or less directly opposite Rome - and that's where he still lives now: right in the bustling centre of the town, in a spacious apartment overlooking the main square.

"Why would you live somewhere else like Monaco when you can live here?" he gestures from his balcony, indicating Giulanova's picturesque piazza with its church shaded by palm trees and beyond that the sea, flanked by a lengthy promenade where beautiful people in pastel-shaded clothing come out to see and be seen every evening.

Turn round and you can look out from the balcony to the mountains behind, covered in dense greenery through which an ancient monastery is clearly visible. It's pretty close to being idyllic.

The apartment that Tarquini - the oldest-ever FIA world champion, having clinched the 2009 World Touring Car title aged 47 years and 266 days - shares with his wife Beatrice and their children is modern and sparsely furnished. In fact, an engineer is busy fiddling with the latest flavour of digital TV box as we speak, with Tarquini occasionally breaking off to offer assistance.

The television remains obstinately blank, but in a corner there is a mass of trophies that takes over on the wall. They tell the story of what is arguably the most polarised career in motorsport: success in karting followed by a spell in Formula 1 - best known for the unenviable record of the most failed attempts to qualify for a grand prix - followed by a switch to touring cars that led to the ultimate prize only three years ago.

When Tarquini won the 2009 touring car title, it was exactly 25 years since he clinched the 1984 World Karting Championship: one of the biggest trophies on the shelf. Not only that, but he shows no sign of stopping. At the age of 50 he is almost certainly the oldest factory driver in top-line motorsport, having signed for Honda's new WTCC team. As usual, it's just for one year. 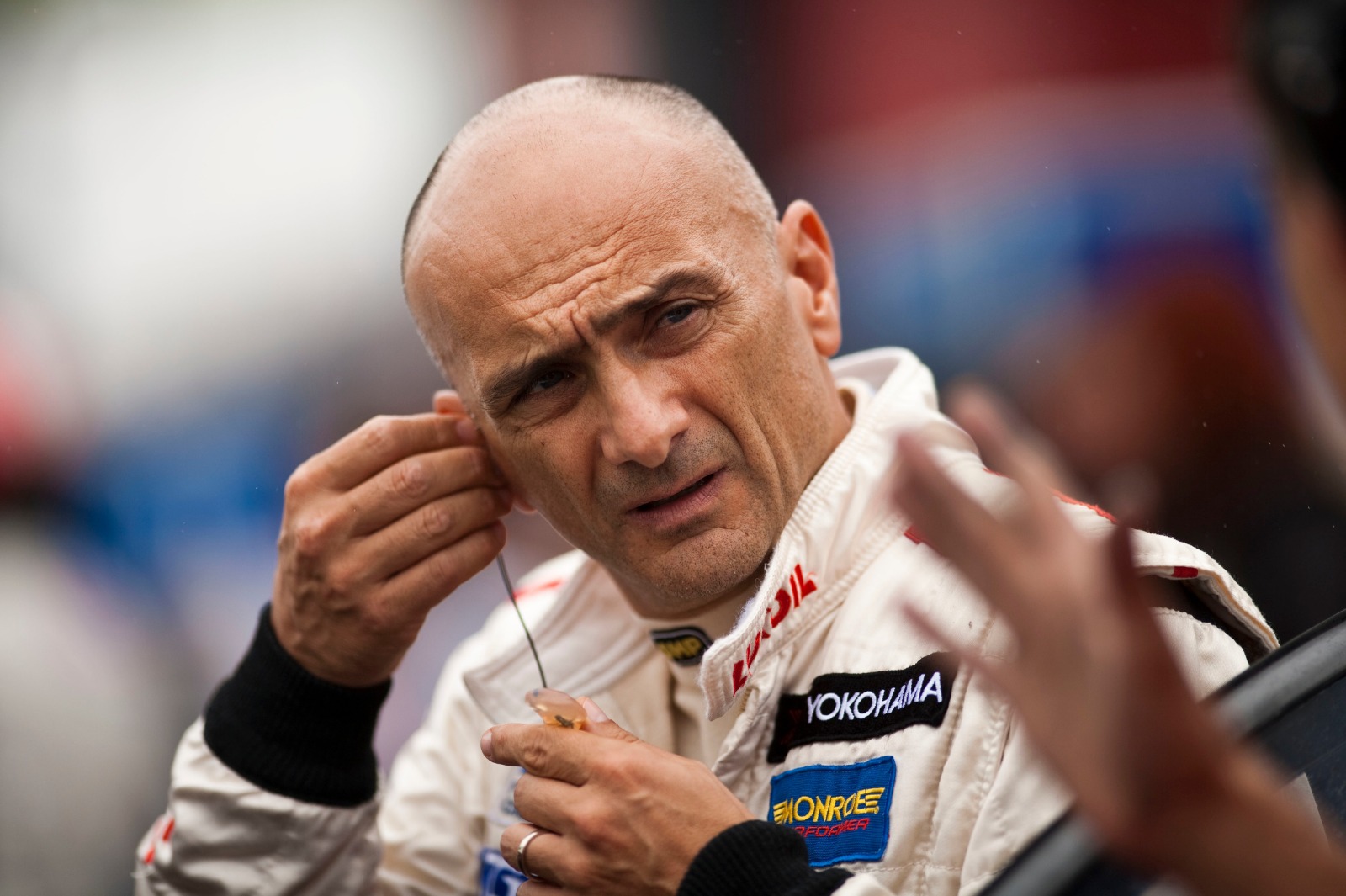 Down-to-earth Tarquini only signed one-year deals to give him a route out, on the off-chance he wasn't quick enough

"It's best that way: it keeps my motivation fresh and allows me to stop if I feel I'm not quick enough anymore, which is a question I'm always asking myself," he points out. "But so far I've never felt disadvantaged by my age: in fact, it's an advantage. I'm as quick as I always was, only this time with more experience."

That's not quite correct. Relative to his opposition, he's actually way faster than he used to be. Because this is the man who used to drive a Coloni: one of F1's most notorious mobile chicanes. Tarquini looks back on his tortuous years in F1 (from 1987 to 1995, but skipping the 1993 and 1994 seasons) with fondness and even nostalgia.

"It was a fairly regular humiliation: if you didn't pre-qualify, you had your team paddock passes physically taken off you, so you couldn't even go in. That was a big problem for the sponsors, who rarely got to see a race" Gabriele Tarquini

This is despite the fact he would regularly embark on flights to destinations as far afield as Australia and Brazil in the absolute certainty that he would be on the same plane home just a couple of days later. In total, he failed to qualify a soul-destroying 40 times (including 24 eliminations in pre-qualifying). Often, the teams he drove for would have their return flights booked in advance, knowing they stood about as much chance of putting their chronically underfunded shed on the grid as they did of landing on the moon.

"It was a fairly regular humiliation: if you didn't pre-qualify, you had your team paddock passes physically taken off you, so you couldn't even go in," remembers Tarquini. "That was a big problem for the sponsors, who rarely got to see a race. We were always wondering where the next budget would come from. It was day-to-day survival."

AGS, for example, went through "six or seven" changes of ownership during Tarquini's three years there.

"It was pretty crazy, we'd get to a grand prix and find out that the team had been sold while we'd been travelling," he says. "Then of course there would be no money to race with. The worst time was Phoenix one year, where we actually had a whip-round to pay for the fuel."

Yet even though the whole experience felt much like banging his head repeatedly against a wall (the low point was probably 1990, where he failed to qualify 12 times out of 16, with a best result of 13th in Hungary) he never once let that head drop. 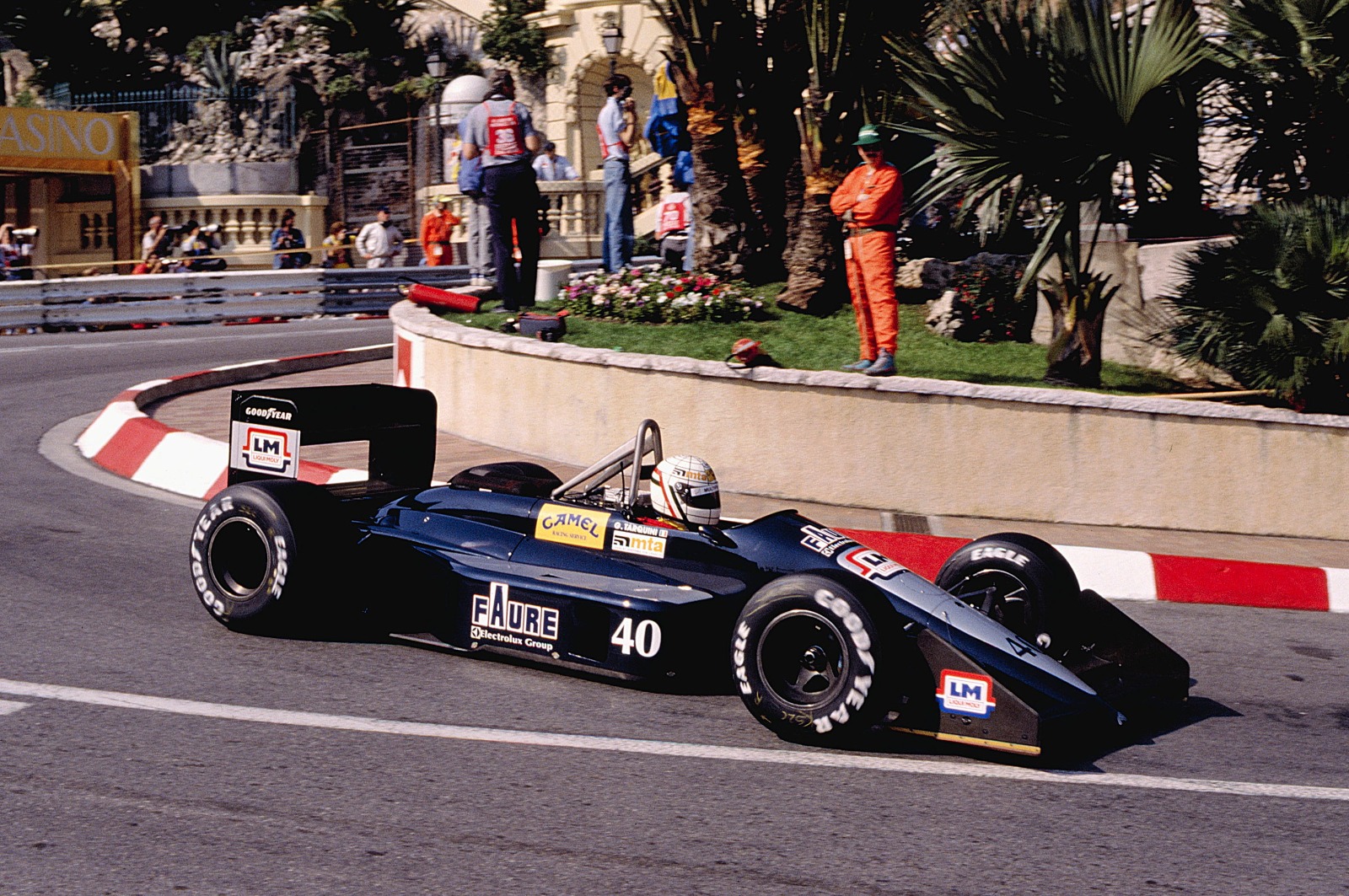 "It didn't get me down at all," he says. At the time I was so young and it was all a big adventure. I had never dreamed I would one day get to F1. And I always thought here were better times just round the corner."

For a while, there were. Tarquini had a couple of standout races in his career. One was Monaco in 1989, where he was running fourth - until an electrical connector on his AGS failed. The following race was Mexico, where he finished sixth. A photograph of that moment still hangs on his wall.

"Those were the occasions when I thought it was possible my life could change," he reflects, sitting on his sofa directly underneath that photograph. "But as time went on, I eventually knew the opportunity was missed. In F1, you either make the quantum leap or you disappear.

"Even though I never reached the top, I have no regrets at all. I took away from beautiful memories and I'm very happy to have scored points, even just the one time. Because in a very small way, that means I left my tiny trace on the history of Formula 1. Otherwise, people might not have known I had even been there!"

It's a surprisingly moving little speech, heartfelt in its humility and sincerity, summarising the weight of history and persistence of memory in a more articulate way than most people could manage.

But if Tarquini only scratched the surface of F1, he carved his name into touring cars. 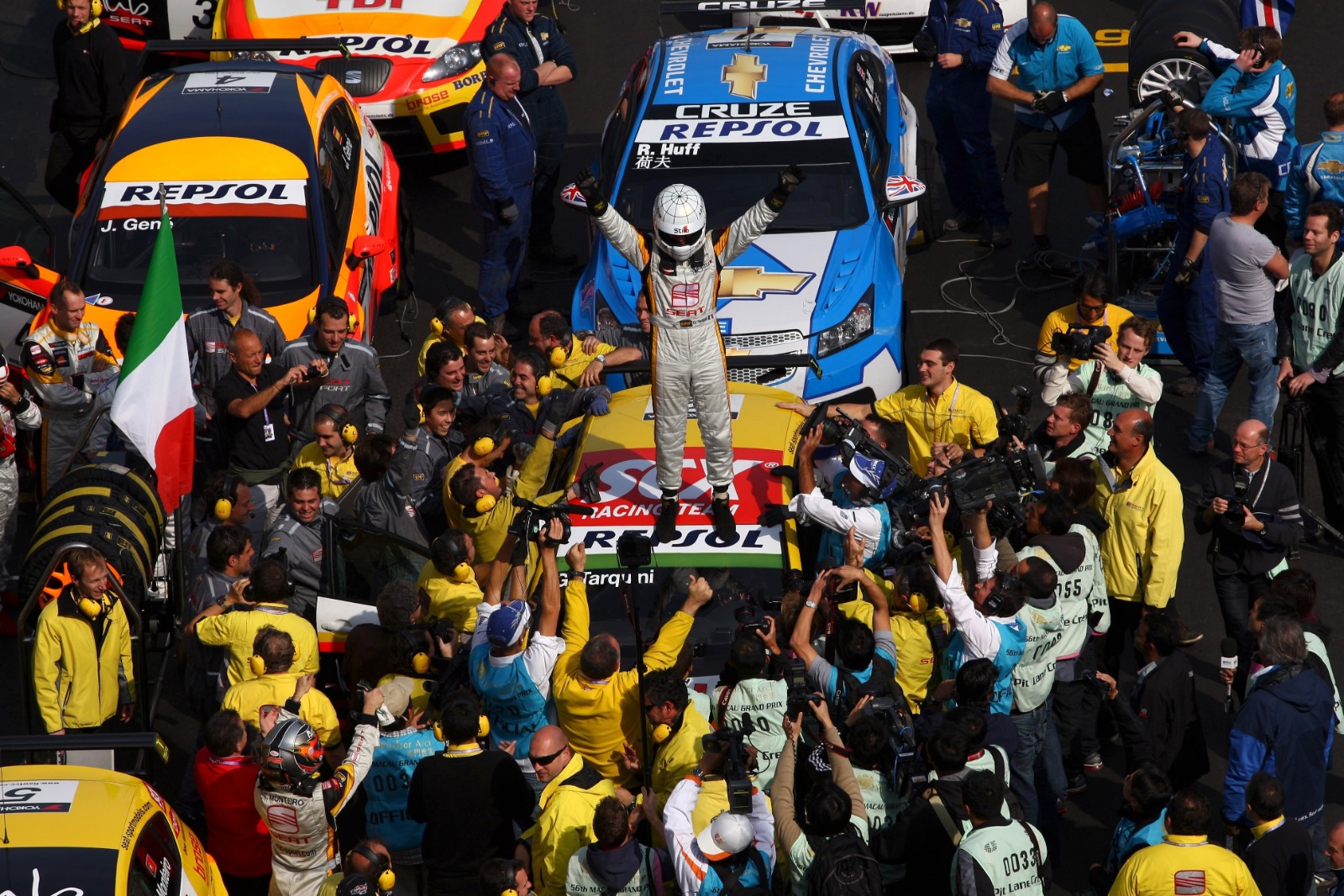 And Tarquini is above all a racer. About 10 years ago, he worked for Sky TV in Italy as an F1 pundit.

"I stuck at it for two or three years, in between my racing, because I always thought that this was going to be a new career once I stopped," he explains. "But I never stopped. Because I enjoy it too much."

"Even though I never reached the top, I have no regrets at all. I took away from beautiful memories and I'm very happy to have scored points, even just the one time" Gabriele Tarquini

And while Tarquini rubbishes the comparison ("one was absolutely stratospheric, the other was just quite good") this is the thing he has in common with Juan Manuel Fangio: the man whose long-standing record of 'oldest FIA champion' he broke. Both of them enjoyed it too much to stop.

Tarquini's first year with Honda was a qualified success, as he finished second in the 2013 WTCC standings behind runaway champion Yvan Muller's RML Chevrolet - still a force despite losing its factory backing.

Having led Honda's charge in the final year of the S2000 rules, Tarquini was only the third-best Civic driver in 2014 as TC1 rules took over. Citroen's arrival left the rest to feed off scraps, and Tarquini slipped to sixth behind Norbert Michelisz's Zengo-run Honda and factory teammate Tiago Monteiro, although the veteran did take the only Honda win of the year at Suzuka.

The 2015 campaign was his first winless season a 2002 campaign spent mostly on the sidelines, although he was the best non-Citroen in fifth.

He joined Lada for 2016, his final year in the WTCC, winning twice on his way to ninth in the standings. But there was still enough in the tank for Tarquini to add yet one more title to his glittering roster, as he joined Hyundai to develop its new TCR challenger, the I30N. 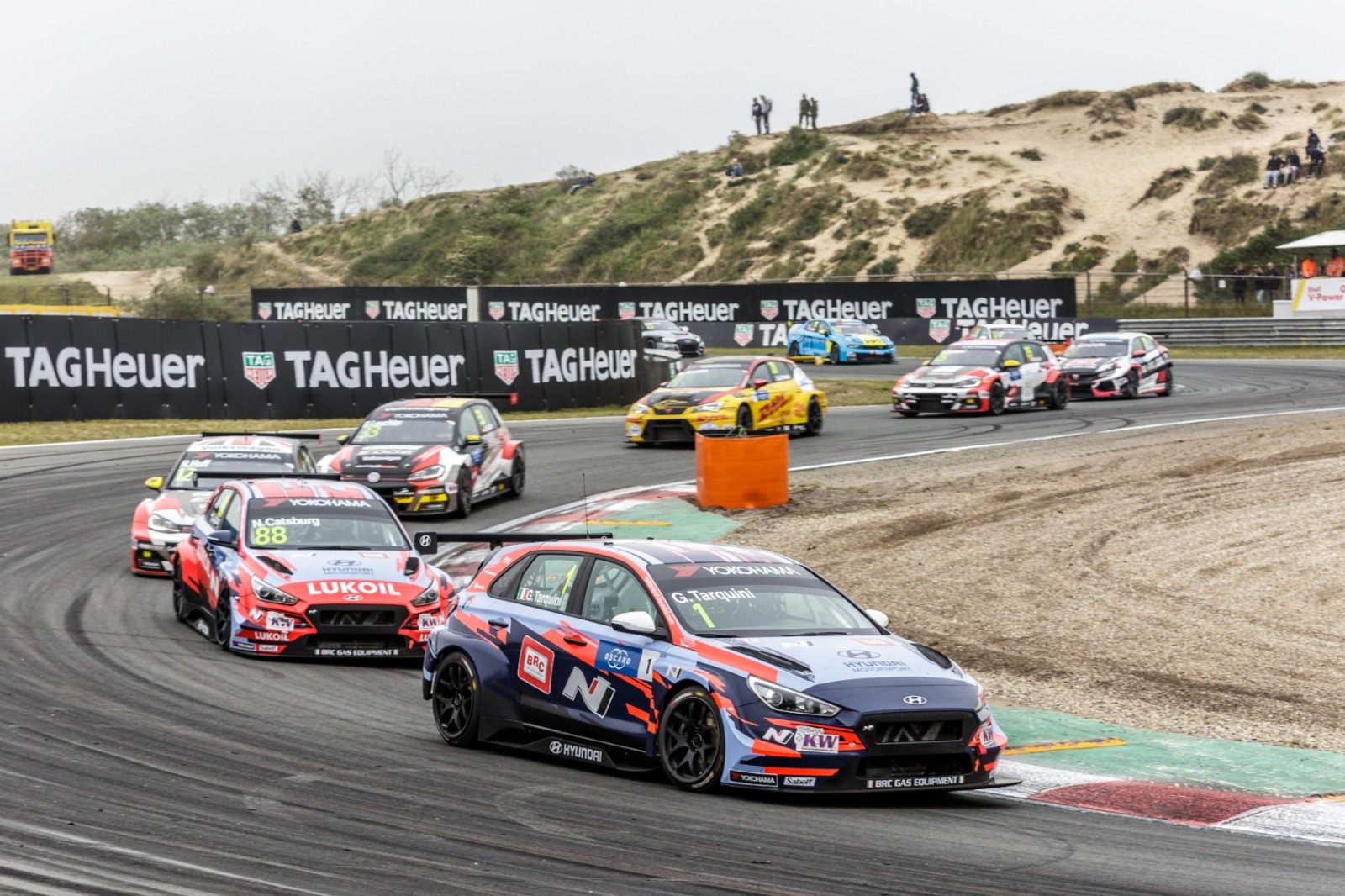 Final manufacturer affiliation with Hyundai fittingly delivered another title in WTCR, giving the Italian the privilege of running #1 in 2019

After spending the 2017 season testing, Tarquini remarkably won the 2018 WTCR title that resulted from the amalgamation of the WTCC and TCR International under TCR regulations - at the grand age of 57. Despite a tough final round in Macau, his five wins earlier in the season were enough to defeat fellow Hyundai racer Muller by three points.

Tarquini's past three seasons with Hyundai haven't hit the same heights - he was eighth in 2019 as teammate Michelisz claimed the title, and slumped to 14th in the COVID-hit 2020 season with no wins to his name.

He returned to the top step of the podium with a popular victory earlier this year at Aragon and with just two rounds remaining in his career at Sochi later this month, currently lies just outside the top 10 in the standings.
When Tarquini does finally hang up his helmet in Russia, it will be a true end of an era. 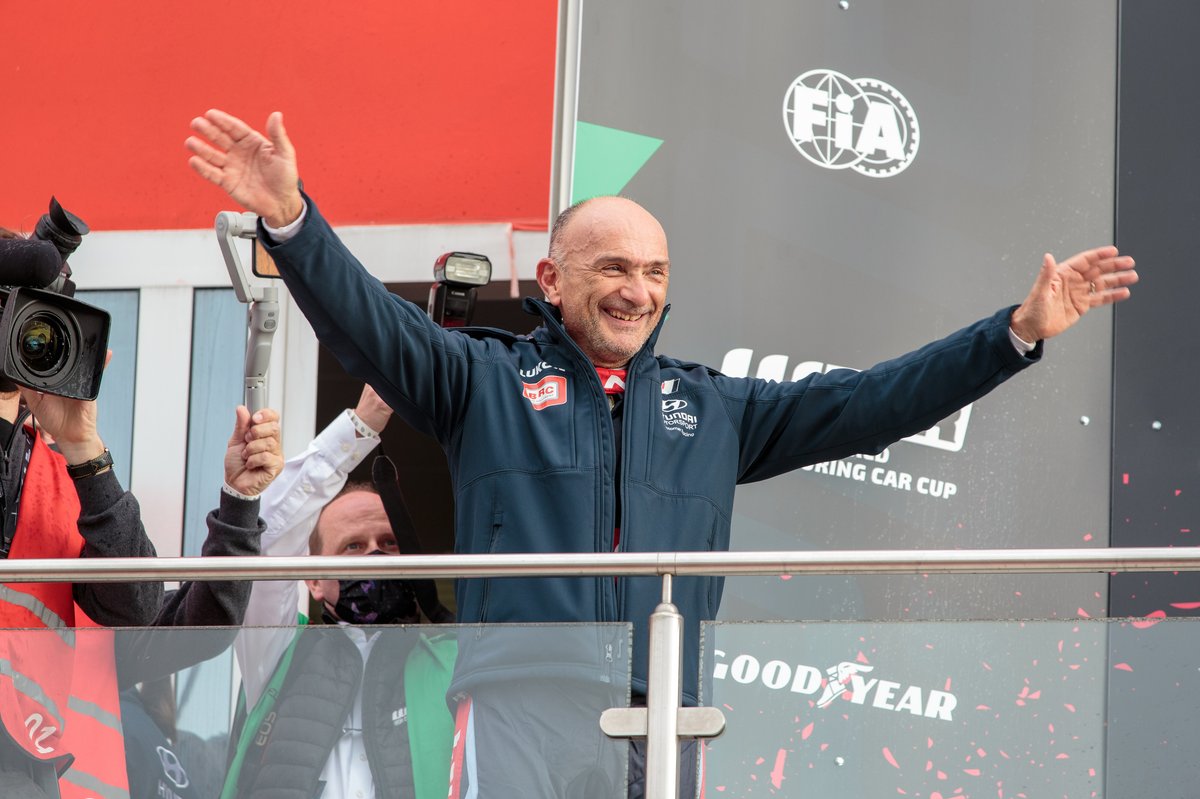 The popular Italian will bow out at the end of 2021