Several World Superbike riders have expressed their concerns about Autodrom Most following a wet practice at the Czech venue on Friday.

With the COVID-19 pandemic leading to the cancellation of the traditional season opener at Philip Island, the WSBK has added a new replacement race at Most as part of a five-year deal that puts the Czech Republic back on the calendar.

But the inclusion of Most hasn't gone down well with teams, with many feeling the track is not up to WSBK's safety standards.

Ducati's Scott Redding was the most vocal rider in the paddock coming into the weekend, saying the 4.2km venue is not even safe for the British Superbike Championship, let alone an international series like the WSBK.

The 28-year-old reiterated his criticism of Most on Friday evening, saying he was "scared" by the layout of the track and feared that a crash 'could end his career' in professional motorsport.

Redding said the fact that several riders elected to sit out FP2 while it was raining illustrated how dangerous the track became in those conditions, particularly due to limited run offs and safety barriers.

"When the top guys, factory teams and factory riders are not going out on track when it's wet, there's a f***ing reason for it and that reason being it's not safe," he said. "It's not [even] safe in the dry.

"Honestly it scares me. I go in some corners and it gives me goosebumps, 'f***, if I crash here it could be the end of my career'. You shouldn't be thinking that in a world-level circuit. We are not a national championship, we are a world championship. That's the problem.

"When I rode a road bike here I was doing [1m]36-low and now today we are doing [1m]33-zero and [the difference] is not made in the straight, it's made in the corners, so I'm now approaching corners with more speed.

"It felt unsafe weeks ago when I came here [on a road bike] and now I feel like I wouldn't stand a chance. And there's not even an air fence in some of the most dangerous places and I don't understand why.

"When you crash into a wall at 100km/h and the bike goes before you or you go before the bike, [the barrier] ain't gonna do anything." 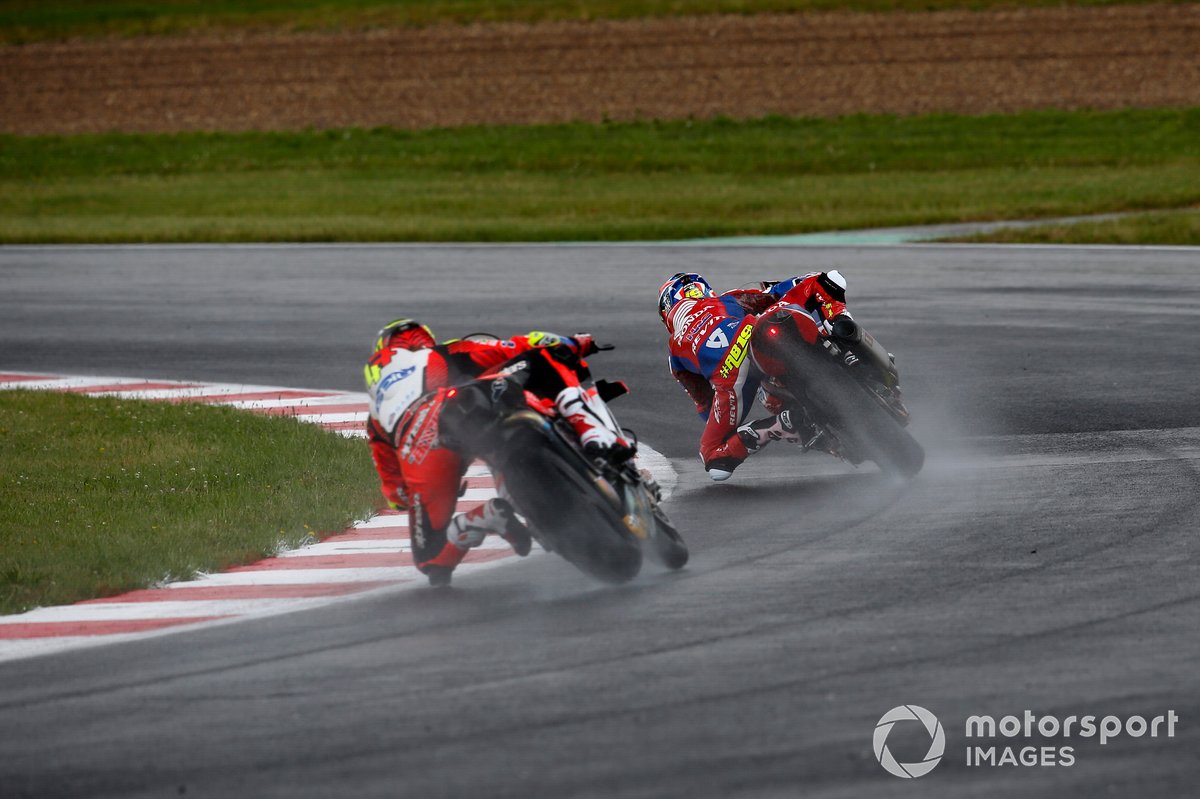 Redding went as far as questioning why Most has been included on the calendar, with the circuit having never been used for a world championship event of this scale before.

"I heard for the national championship they were complaining about this circuit," he continued. "I heard from people in the paddock, the people that work here, so why are we here is my question.

"It is difficult for us to fight against this position because there were 13 riders riding [in FP2 in wet] and everything was okay.

"But the problem is when it's not okay how bad the damage is. We could have a weekend where everything goes well and I have my fingers crossed everyone goes home safe, but we could have an incident that really awakens the paddock and think 'what the f*** are we doing?' We don't need to be in that position.

"Everyone knows it's not safe but we are still pushed or chosen to do this."

Six-time champion Jonathan Rea says he understands the WSBK's obligation to put together a full-length calendar, but admitted that Most wasn't the best of circuits to visit even when the series' choices were limited.

"We've been very comfortable in the world championship with some amazing tracks," the Kawasaki rider said. "You can't rank Most circuit with the best circuits in the world but the reality is we can't pick where we want to go in Superbikes.

"I'd love to do 13 races in Qatar or amazing tracks like that but we can't. Huge kudos to Dorna for trying to get a 13-round championship.

"But Most for me is not one of the best circuits in the world, but if you try to get 13 rounds and to please all the team managers and sponsors and keep the show, we have to come to tracks that want us and we can ride, so this is how it is really."

Rea's teammate Alex Lowes said he enjoyed riding around the Most circuit after finishing second to Yamaha's Toprak Razgatlioglu on Friday, but admitted that there is little that could be done to make the track safer for bike racing.

"They can't do anything about it but it's the reason why we went away from these types of tracks.

"We've come back because we need tracks to fill the calendar, this is the reality. But in terms of enjoying the track, the track is really enjoyable to ride.

"Some of the corners have no space. This is the reality of the situation, we can look and say it's the same for everyone."