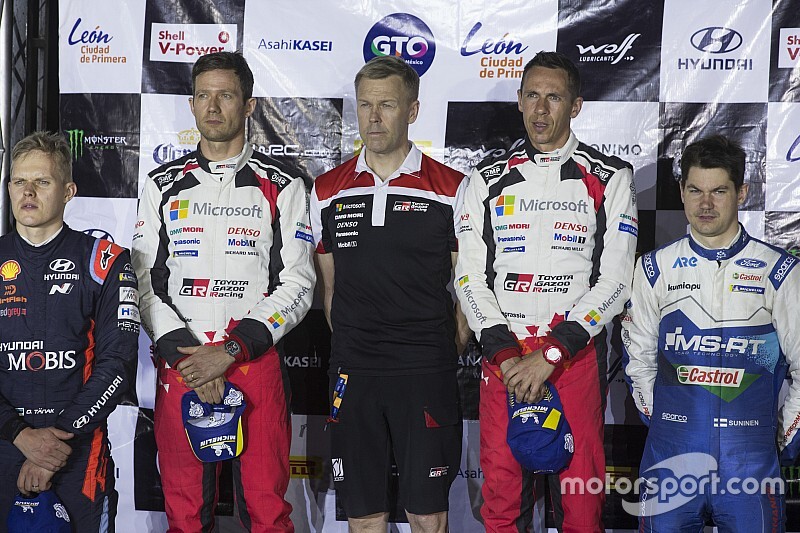 Rally Mexico winner Sebastien Ogier says that the event should not have taken place at all in light of the global coronavirus pandemic.

Ogier secured his first victory since joining Toyota on Saturday, the Leon-based event having been cut short by three stages as Sunday's running was axed to help teams beat travel restrictions being imposed in response to the COVID-19 outbreak.

The six-time World Rally champion expressed his reservations on Thursday ahead of the start of the rally about proceeding as most other major motorsport series - including Formula 1, IndyCar and NASCAR - abandoned races planned for the same weekend.

After taking the win by some 27 seconds over Ott Tanak, recording his sixth triumph in Mexico, Ogier was even more outspoken about the situation.

"Our love story with Mexico continues, twelve years after making our debut here, but considering the context, this win is very different from all the others," said the Frenchman.

"For me, this rally should not have taken place. Nothing is more important than human lives and my fear during the weekend was that we could be putting our Mexican friends in danger.

"I'm sorry that we were not able to spend some time with the fans, who are always so warm-hearted here, but it was a necessary precaution for everyone's well-being."

He added: "I'm very happy to have achieved this first victory with Toyota and I would clearly have preferred it to have been in other circumstances and to have celebrated it all together.

"It's now time for all of us to look after ourselves and our families and I hope that we will emerge quickly from this worldwide crisis."

WRC Promoter managing director Oliver Ciesla admitted that circumstances had changed "rapidly" between the decision being made made to press on with the event on Thursday and the call to abandon the last three stages.

"When we met with FIA, the organisation of Rally Mexico and the teams, no-one was in favour of racing on Sunday," said Ciesla. "It was a difficult decision, but the right one.

"Mexico is always a very well-organised rally and one where we feel welcome, but we had to make this decision, especially because of the conditions that have changed since Thursday when to travel has become very difficult, and circumstances continue to change rapidly.

"We have a lot of international members here and we had to make sure they get home safely."

With Rally Argentina having been postponed, the next WRC event is scheduled to take place in Portugal on May 21-24. But Ciesla admitted that this event could also be in doubt given the uncertainty surrounding the coronavirus situation.

"In the WRC we will stop for at least nine weeks; we have suspended Rally Argentina and we should resume with Rally Portugal, which we hope will happen," he said.

"But as of today no one can give us any real information about when the health situation in Europe, and around the world, will return to normal. At the moment I don't have an answer as to what will happen to the WRC calendar."