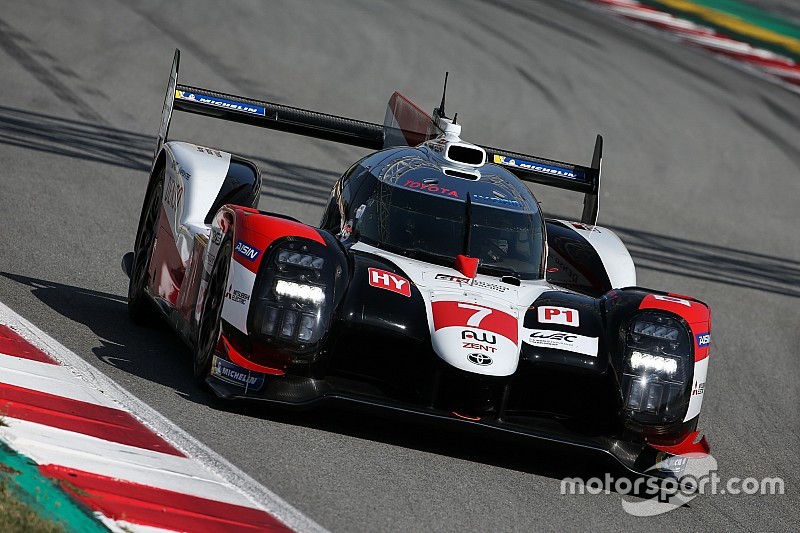 Jose Maria Lopez set the fastest time on the first morning of the FIA World Endurance Championship Prologue test at Barcelona, heading a Toyota one-two ahead of Sebastien Buemi.

On a sweltering morning at the Circuit de Barcelona-Catalunya, Kamui Kobayashi laid down a benchmark of 1m30.906s in the first two hours of the morning session in the #7 Toyota TS050 Hybrid.

Rebellion, which is running two cars at Barcelona despite only having confirmed one for the Silverstone season-opener, was the best of the privateer squads in third and fourth.

After sitting out the first half of the session, Ginetta’s Team LNT showed some signs of life with WEC veteran Stephane Sarrazin putting the first laps on the board in the #6 G60-LT-P1.

Sarrazin completed seven installation laps, none quicker than the LMP2 runners, before posting the 10th-fastest time overall in the closing stages, a 1m34.670s.

The #5 Ginetta remained in the garage all morning after a delayed build-up.

United Autosports topped LMP2 with its brand-new Oreca 07, with Paul di Resta leaving it until the final 10 minutes to set the fastest time in class, a 1m33.344s.

That was enough to beat the second-placed Signatech Alpine Oreca of Andre Negrao by 0.308s.

Racing Team Nederland, now also running Oreca machinery after switching from Dallara, was third-fastest in the hands of Giedo van der Garde on a 1m34.176s, narrowly ahead of the Cool Racing Oreca of Nicolas Lapierre.

Ferrari set the pace in GTE Pro, as Alessandro Pier Guidi and Davide Rigon set the quickest times in the #51 and #71 488 GTEs respectively in the third hour. Pier Guidi’s 1m44.040s in the #51 car was six tenths quicker than Rigon in the #71.

In GTE Am, Matteo Cairoli’s early 1m45.009s effort in the #57 Porsche stood as the fastest lap of the session, the Italian leading a Project 1 lockout of the top two places ahead of the #77 Dempsey Proton Porsche.

The test was red-flagged with 1 hour and 20 minutes remaining after an off at Turn 9 for David Heinemeier Hansson in the #57 Porsche, causing an 11-minute delay.

Toyota: LMP1 handicaps are for "good of the championship"