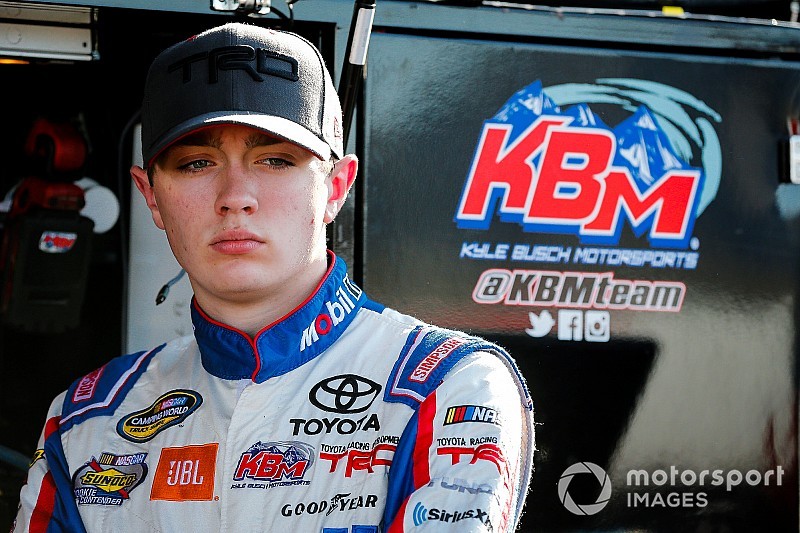 Toyota development driver Christian Eckes is ramping up his racing schedule this season.

Eckes, 18, will compete fulltime in the ARCA Racing Series with Venturini Motorsports and drive in seven Gandor Outdoors Truck Series events with Kyle Busch Motorsports in the No. 51 Toyota.

Last season, Eckes won three times in 13 ARCA starts and competed in four Truck events with KBM with a best finish of eighth in June at Iowa.

“Christian progressed nicely last year collecting some wins in the ARCA Racing Series and also did a nice job with the limited opportunities he had driving for our fourth team last year,” KBM owner Kyle Busch said. “At Gateway he showed that he's capable of running up front and leading laps.

“With being a full-time driver in the ARCA Series this year, getting more seat time there and also having more races on his schedule with us, we feel that his progression will continue and he’ll be a guy that can compete for wins in the Truck Series.”

Eckes, of Middletown, N.Y., earned his first career ARCA victory at Salem (Ind.) Speedway last April. He also won on the dirt track at the Illinois State Fairground in Springfield and at Lucas Oil Raceway in Indianapolis in October.

The 2019 season will be his first as a fulltime competitor in the series.

“I’ve never been more excited and more ready to start a season,” Eckes said. “There’s a lot of preparation that goes into offseason training. No matter if you’re running for a championship or not, the sacrifice you put in during the off-season will pay dividends once the season starts.

“I pride myself on my preparation and my will to succeed – I can assure you there was no shortage of that this year. I’ve kept extremely busy training, logging simulation seat time and straight pen/paper.

“I feel as though I’m as ready as ever.”

Eckes’ Truck scheduled will begin with the season-opener at Daytona International Speedway. He will also compete Gateway in June, Pocono in July, Las Vegas in September, Martinsville in October and the season finale at Homestead in November. One additional race has yet to be determined.

Motorsport Report: NASCAR to strip wins for violations in 2019