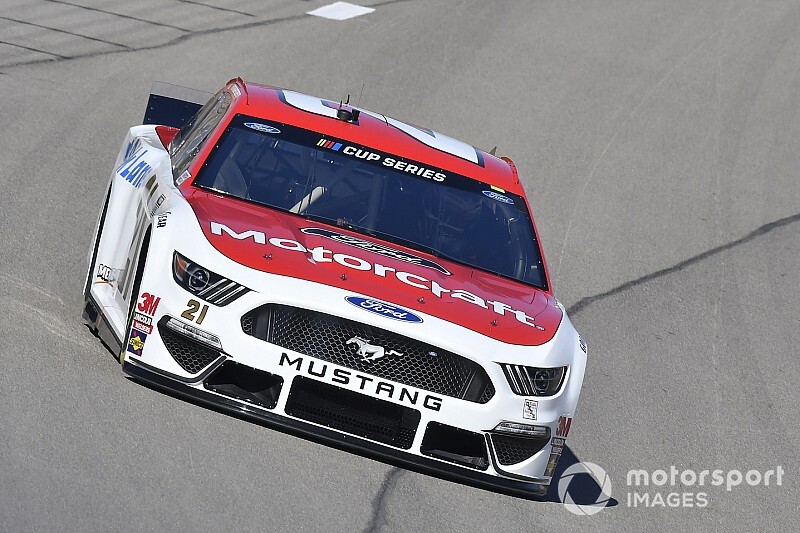 There has been no lack of enthusiasm on Matt DiBenedetto’s part regarding his opportunity to run with Wood Brothers Racing this season and he’s already cashing in.

After getting caught up in a wreck in last week’s season opener at Daytona, DiBenedetto found himself on the last lap of Sunday’s race at Las Vegas with a chance at his first NASCAR Cup Series victory.

But after leader Joey Logano and DiBenedetto took the white flag a wreck erupted in Turn 4 behind them, which forced NASCAR to throw a caution.

With the field frozen, Logano earned the victory and DiBenedetto was locked into second, tying his career-high finish set just last season.

“This is all just too surreal. Tough to be that close, but, hey, this is only the second race of the season,” DiBenedetto said. “So it was the strength of this team.

“It’s so cool to have the backing of all the people that allow me to drive this thing. It took so many people, Motorcraft, Quick Lane. To be driving this iconic car is so cool.

“Menards and Paul (Menard), I know you’re watching at home and proud and I can’t thank everyone in that whole family for this opportunity for it.”

Shortly after Menard announced last summer he would retire from fulltime NASCAR competition after the 2019 season, the Wood Brothers tapped DiBenedetto to drive its No. 21 Ford in 2021.

DiBenedetto had been informed just weeks earlier that he would not be returning to Leavine Family Racing and was looking for a new ride.

DiBenedetto ran consistently in the Top 10 for much of the third stage and by late in the race was charging into the top-five.

A late-race caution bunched the field and some teams elected to pit for new tires but DiBenedetto stayed out and restarted third. After contact with William Byron on the restart, DiBenedetto was able to power into second place before the white flag.

“This whole team, (crew chief) Greg Irwin, all of them, we were covered. It wasn’t pretty at the start, but, man, they did an excellent jo,” DiBenedetto said.

“So happy to be working with this team, the fans. Thank you all so much. The journey has been pretty cool.”

Asked what he will take out of Sunday's race, DiBenedetto said, "How strong this team is and it’s encouraging. That's what makes a great team. We didn’t start off great, but to know that we can close, make the right adjustments, do all the right things, my pit crew can do an excellent job – all the things that tie a race together.”
Next article