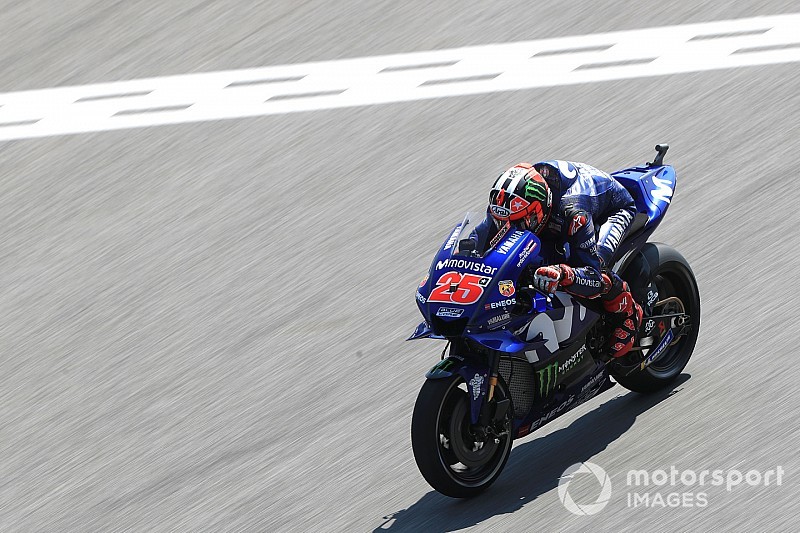 Times quickly tumbled in the opening part of the 45-minute session as the new-for-2018 venue rubbered in, although it was Honda man Marc Marquez that sat atop the timesheets virtually throughout.

An early effort of 1m32.485s put Marquez over a second clear of the chasing pack, although by the conclusion of the opening runs his rivals – led by Pramac Ducati rider Danilo Petrucci – had closed the gap up to a little over a tenth.

Marquez managed to lower the bar from a 1m31.970s to a 31.668s in the second runs, with Andrea Iannone (Suzuki) taking over as his nearest challenger.

That benchmark survived until the final two minutes of the session, when Yamaha’s Vinales took over at the top of the pack on a 1m31.220s, with Jack Miller (Pramac) slotting into second moments later.

That time put him fastest, but still fell some 1.5s short of the best time set in February testing at Buriram, set by Honda’s Dani Pedrosa.

Valentino Rossi made it a Yamaha one-two just before the chequered flag fell, demoting Miller to third, before Andrea Dovizioso put his works Ducati ahead of the Australian.

Petrucci and Scott Redding (Aprilia) rounded out the top 10, followed by Cal Crutchlow on the second LCR machine.

Jorge Lorenzo, struggling with foot injuries from his first-corner crash at Aragon, set the 17th fastest time, 1.3s off the pace of Vinales and a little under a second slower than works Ducati teammate Dovizioso.

Lorenzo was one place ahead of lead KTM runner Pol Espargaro, who is back to fitness after having to sit out the Aragon round.

Jordi Torres, on his second MotoGP start for Avintia Ducati replacing the injured Tito Rabat, was just a tenth off the pace of Xavier Simeon in 24th and last.