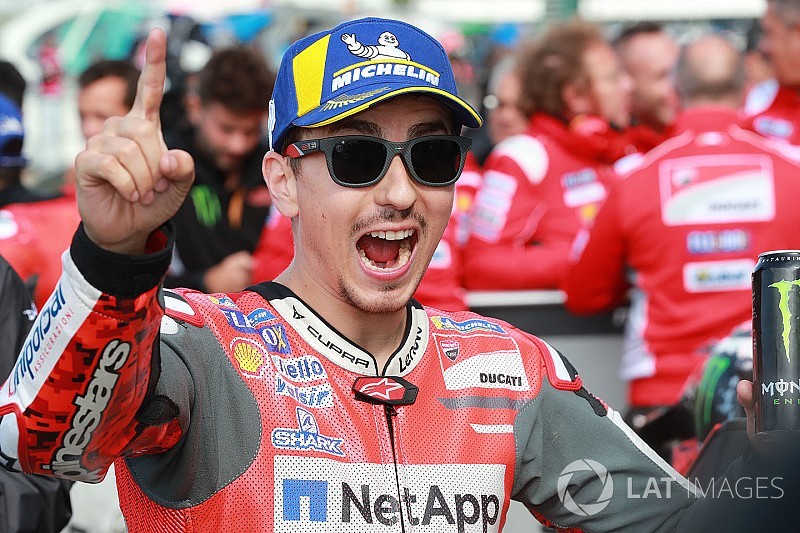 Jorge Lorenzo grabbed his second pole of the MotoGP season in a rain-affected, delayed British Grand Prix qualifying shootout at Silverstone, leading a Ducati 1-2 ahead of Andrea Dovizioso.

Heavy rain at the tail end of FP4 led to several riders falling at Stowe corner, in an incident that resulted in Tito Rabat being struck by the bike of Franco Morbidelli - resulting in Rabat sustaining a triple fracture to his right leg.

That delayed the start of Q1 by around 25 minutes, and there were further delays between Q1 and Q2 due to the medical helicopter being unavailable as Rabat was flown to hospital in Coventry.

When the pole shootout finally started, Lorenzo briefly moved to the head of the times with a 2m12.001s effort before being beaten by LCR Honda rider Cal Crutchlow and then Johann Zarco's Tech 3 Yamaha.

Andrea Dovizioso then took over the top spot with a 2m10.314s just after the chequered flag flew before Lorenzo managed to set a 2m10.155s to beat his Ducati teammate by 0.159s.

Crutchlow and Zarco both made improvements on their final laps, the latter tailing Marc Marquez exiting Woodcote, but couldn't beat the leading pair and had to settle for third and fourth places.

Marquez was fifth, ahead of Danilo Petrucci's Pramac Ducati and Andrea Iannone's Suzuki.

Bradley Smith enjoyed a spell at the front early in the session, helped by his experience of the conditions from Q1, but the KTM man fell to eighth in the final reckoning, while Jack Miller's gamble on slicks backfired and he was ninth.

Alex Rins (Suzuki) and factory Yamaha duo Maverick Vinales and Valentino Rossi completed the Q2 order, with Rossi not managing to get out of the pits in time for his final run to improve on his time.

Smith led a drenched opening session virtually throughout, taking a commanding three-second lead over the rest of the field that was steadily chipped away at as conditions improved.

Dani Pedrosa briefly deposed Smith with an effort of 2m14.866s to quickest by under a tenth, but Smith responded with a 2m13.340s to top the session and move through to Q2 for the first time this year.

Pedrosa was then demoted by both Morbidelli and Rins, who finished in second to join Smith in advancing - bumping out Morbidelli, who will begin 13th.

Scott Redding (Aprilia) made a jump to fourth, and will start 14th on Sunday, Tom Luthi (Marc VDS Honda) matches his best-ever MotoGP qualifying to complete the fifth row of the grid.

Pedrosa was shuffled all the way down to 16th ahead of Aleix Espargaro's Aprilia and the KTM of Pol Espargaro's replacement for the weekend, Loris Baz.

Rabat hospitalised after being hit by Morbidelli's bike