Yamaha MotoGP rider Valentino Rossi has revealed that his qualifying run at Motegi was compromised by a tyre pressure “mistake”.

Rossi had been just 0.011s off pole in the preceding round in Thailand, but reverted to form in Japan, qualifying a distant ninth.

However, the Italian was the only rider in Q2 not to improve on his second run – and believes he would've ended up higher up the order if not for a mishap in his pit box.

“Unfortunately we did a mistake with the rear tyre in the box, with the pressure,” he told BT Sport.

“It’s a shame because with the first tyre I was not so bad, P5, and with the second tyre I could improve, so I think I could have started on the second row, which I think is my level.”

The error aside, the works Yamahas' performance was still a climbdown after their Thailand breakthrough, with the other factory bike of Maverick Vinales managing no better than seventh.

Rossi attributed the mismatch in pace to having had harder-construction rear tyres available in Buriram, but reckoned he will still be able to fight out front in what should be “a very open race” on Sunday.

“Thailand was a surprise, we can use the hard tyres that help us more. Looks like this weekend we are more similar to the other races of the second half of the season,” he said.

“It’s also true we can do a good race, I think, because there are a lot of riders with similar pace.

“Will be very important to work tonight in a good way for improve some places, because my pace is not fantastic, but it’s constant. I can go to the end of the race.

“The start, first lap and tyre choice will be important, but looks like tomorrow is a very open race. To win, difficult. Maybe podium, top five, we try.”

Vinales, who was on the podium in Thailand and stated on Friday at Motegi that Yamaha's gains had been “confirmed”, attributed his struggles to a lack of rear grip.

The Spaniard claimed the bike had improved on traction on corner exit, but said he was unable to carry enough speed through the turns.

“In Buriram I could stop much more in the beginning of the braking, which permits me to enter faster in the corner with more banking [lean angle],” he explained.

“Today for me was impossible to use the tyres, I just ran wide and wide and wide. I was really limited about bike behaviour, I couldn't push like in Thailand.

“In Thailand I could ride more, like one metre inside, one metre outside, trying to find the better line. Here I'm grip-limited, I have only one line and I need to follow it.” 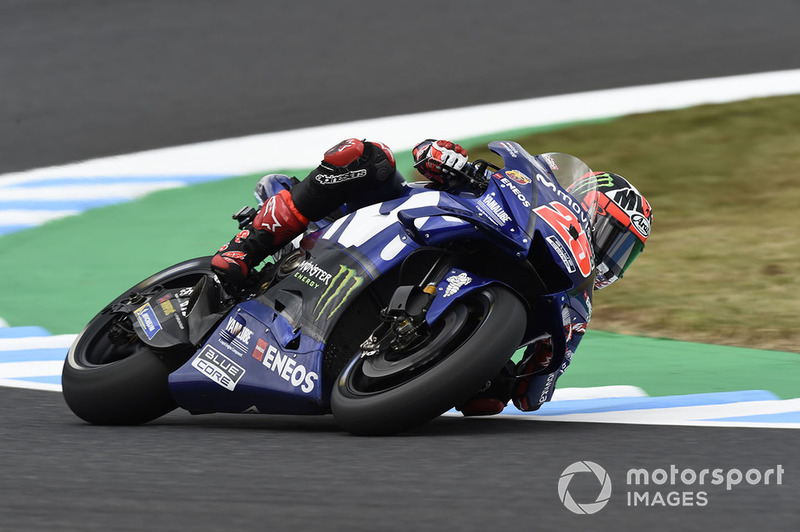