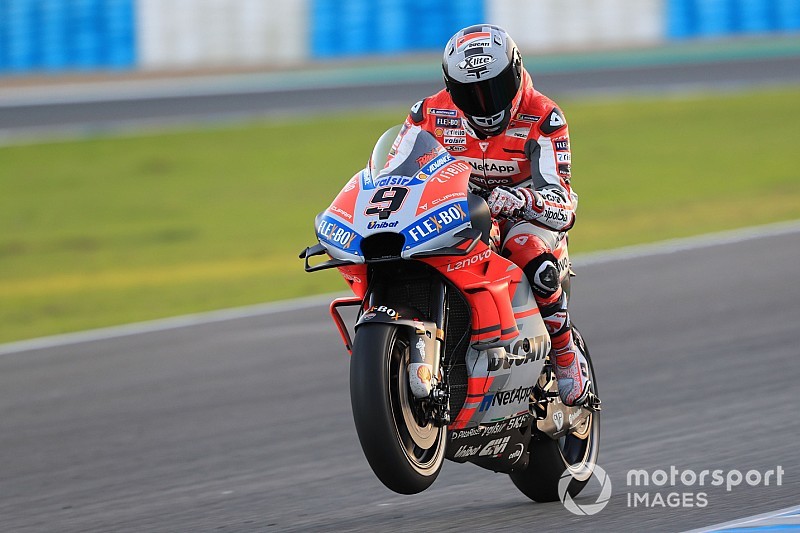 New factory Ducati MotoGP rider Danilo Petrucci set the pace on the penultimate test day of 2018 at Jerez ahead of teammate Andrea Dovizioso.

Petrucci leapt to the top of the timesheets at the start of the final hour of running, becoming the first and only rider of the day to break the 1m38s barrier with a best time of 1m37.968s.

Not long after, LCR Honda's Takaaki Nakagami went second-fastest on a 1m38.348s, although he was demoted to third in the closing stages by Dovizioso, who ended up 0.217s behind teammate Petrucci on a 1m38.185s.

Dovizioso also suffered a crash at Turn 5 in the final hour, which left him in pain.

Maverick Vinales, quickest during both days of last week's Valencia test, was the best-placed Yamaha rider in fourth, 0.408s off the pace, followed by Marc Marquez on the first of the works Repsol Hondas.

Marquez's new teammate Lorenzo enjoyed a brief spell at the head of the times on his plain-coloured Honda, before ending up seventh fastest behind Franco Morbidelli's Petronas Yamaha.

Mir caused the day's only red flag when he suffered a major off at Turn 7 and was taken to the medical centre for checks, but was found to have suffered no significant injuries.

Andrea Iannone was another rider to take a tumble, the new Aprilia rider doing so at Turn 5. He was 11th-fastest.

Heading KTM's efforts was Pol Espargaro in 15th place - two places ahead of Valentino Rossi, whose Yamaha suffered a technical problem that caused him to stop on track, costing him vital running.

Johann Zarco's low-key start to life at KTM continued in 19th place, one place behind Aprilia tester Bradley Smith, the man he replaces at the Austrian manufacturer.

Of the other test riders, Sylvain Guintoli was 22nd fastest for Suzuki, while Matteo Baiocco, standing in for the unwell Aleix Espargaro at Aprilia, propped up the order in 24th and last.

Stefan Bradl was due to take part in the test with the Honda test team but instead completed his work on Monday, sharing the track with the World Superbike field, and sat out Wednesday's running.

Rossi warns '19 Yamaha "not the improvement we need"

Silverstone would be "disappointed" to lose MotoGP race