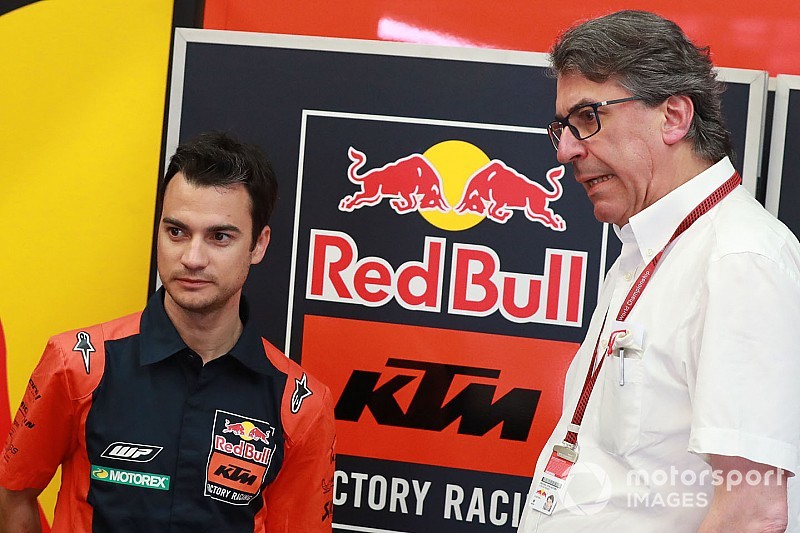 Dani Pedrosa rode a KTM MotoGP bike for the first time since his shoulder operation in a private test this week at Mugello, the team has confirmed to Motorsport.com.

The Spaniard was in action during a two-day private test at the Italian Grand Prix venue organised by Ducati, in which KTM, Aprilia and Yamaha also participated.

Although Pedrosa was not officially part of KTM's test programme, which was undertaken by Mika Kallio, the two-time 250cc champion was eager to assess his fitness after having been out of action since his operation on his fractured right collarbone in February.

The estimated recovery time was three months, but Pedrosa was unable to take part in the recent post-Spanish GP test at Jerez as had been originally hoped.

A KTM team source said the Austrian marque hopes to have Pedrosa back in action properly for next month's post-race test in Barcelona.

The source told Motorsport.com: "According to x-rays, Dani is not 100 percent yet, but he's very close to full recovery. He was indeed in Mugello and he got on the KTM, but it was just a few laps to test himself and see his physical condition on the bike.

"He did not ride much and he was not very fast since the conditions of the track were not good, so it was not a significant test.

"We hope to have Pedrosa 100 percent available to ride with the test team starting in June."

It remains possible Pedrosa could rack up further mileage on the RC16 prior to the post-Barcelona test, which is scheduled for June 17.