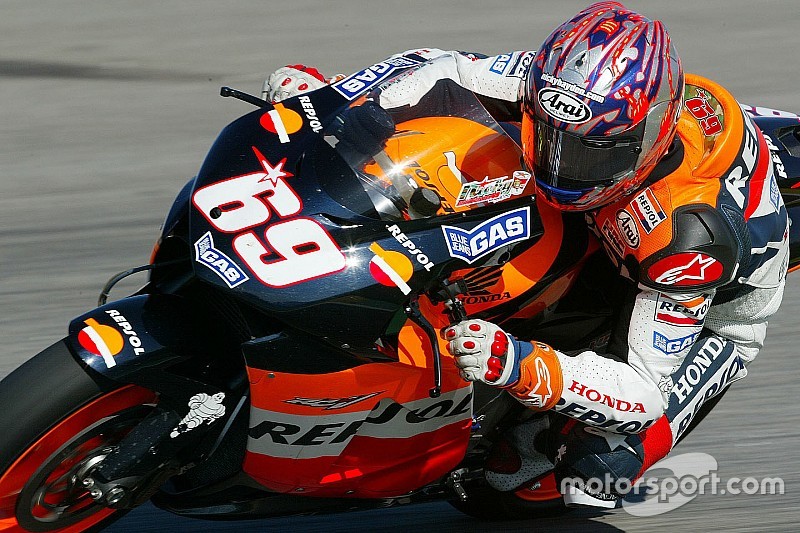 Nicky Hayden, the 2006 MotoGP champion, has tragically died at the age of 35.

Riding and racing motorcycles was a life-long passion for Nicky Hayden. He was born in Owensboro, Kentucky, in 1981 to Earl and Rose Hayden – both dirt track riders in their own right – and was on a bike by age three. When he was five he started racing against older brothers Tommy and Roger Lee Hayden on a homemade track on the Hayden property.

Hayden quickly moved into minibike racing, and then 125s, moving through the club racing scene until he was knocking on the door of the AMA.

When he turned 16 midway through the 1997 season, he also turned professional and ran a satellite bike in the AMA 750 and 600 Supersport classes.

A switch to satellite Suzukis for the following season saw him win his first races in both categories, and he was lured to the Honda fold with a factory contract for a top satellite team Erion for '99. He duly became the youngest AMA 600 Supersport title winner ever, and was promoted to AMA Superbikes on a factory bike for 2000.

After finishing second in 2000, and third in 2001, Hayden's breakthrough year came in 2002. He added to his 600 success by becoming the youngest ever AMA Superbikes champ, as well as winning the prestigious Daytona 200 and mixing it with the top riders in a World Superbike wildcard appearance at Laguna Seca.

From there, he was sent straight to World Championship level with a Repsol Honda MotoGP ride as teammate to Valentino Rossi.

Rookie of the Year honours, thanks to a pair of podiums, came in 2003, while a broken collarbone hampered his progress in 2004 - although he still ended up some way behind new teammate Alex Barros, who was signed to replace the Yamaha-bound Rossi.

Hayden bounced back strong in 2005, though, taking his first MotoGP win in stunning style in front of his home crowd at Laguna Seca. That US GP race was subsequently used to underpin the Mark Neale movie 'The Doctor, The Tornado, and The Kentucky Kid'.

In 2006 Hayden became World Champion. His triumph was one of consistency, as he only took two wins at Assen and Laguna Seca - fewer than main rivals Rossi (5), Loris Capirossi (3) and Marco Melandri (3) - but built a sizable points buffer with nine podium visits in the first 11 rounds.

However, things took a turn at the second-last round in Estoril, where Hayden was taken out by teammate Dani Pedrosa. It meant he had to overcome an eight-point deficit at the last round in a memorable Valencia finale, which he did thanks to a third place and an early crash for Rossi.

The switch to 800cc bikes for the 2007 MotoGP season didn't quite suit Hayden, and he slipped back to eighth in the points on a bike much better suited to Pedrosa. He was sixth 2008 thanks to some smart podium performances at Indianapolis and Phillip Island, before dropping down to 13th after moving to Ducati for 2009.

Hayden's second season on a Ducati saw him running closer to the front, finishing on the podium at Aragon on his way to seventh in the points, before he was teamed up with Rossi again in 2011, finishing eighth with a single podium, this time at Jerez.

A return to Honda beckoned in 2014, albeit this time on an open-spec machine for the Aspar team. His eighth-place finish in Qatar that year proved his best result in two seasons with the Spanish squad, and it was in an emotional press conference at Motegi 2015 that he announced he was calling time on his MotoGP career to race in World Superbikes with Honda.

That move made him a winner once again, as Hayden took a tense victory in the rain at Malaysia on his way to fifth in the points. He also made a pair of MotoGP cameos in '16 as well, called on as a super sub for an injured Jack Miller at the Marc VDS team in Aragon, and then making one last start on a Repsol Honda at Phillip Island after Pedrosa broke his collarbone in Japan.

Armed with an all-new Fireblade for 2017, Hayden had set himself the target of becoming the first rider to win titles in both MotoGP and World Superbikes, but his campaign got off to a slow start on a bike sorely lacking in testing miles. After five rounds, he was down in 13th in the points with a best finish of seventh place in Thailand.

After a life spent fully and passionately emerged in the dangerous world of two-wheel motorsport, it was a cycling accident that ultimately claimed the life of the Kentucky Kid. Struck by a car while cycling in Italy days after the Imola World Superbike round, Hayden succumbed on Monday to the injuries he sustained in the accident.

Motorsport.com would like to offer its condolences to Hayden's family, friends, and supporters spread right across the motor racing world.
Next article