Yamaha’s Fabio Quartararo beat Ducati’s Jack Miller by 0.077s to record the fastest time on the second day of MotoGP testing in Qatar.

As is typical during the Qatar test, the Losail circuit was sparsely populated in the early part of the session, with KTM test rider Dani Pedrosa setting the early pace at 1m58.290s as one of just four runners on track in the first hour.

Pramac’s Johann Zarco rounded out Hour 2 fastest of all with a 1m55.796s on his 2021 Ducati, with the Italian marque testing its new front holeshot device along with KTM, Honda and Aprilia. Francesco Bagnaia pipped his Pramac replacement to the top of the standings as the third hour of running began, the factory Ducati rider lapping in 1m55.560s.

The Italian’s run at the top was short-lived, however, as Yamaha’s Maverick Vinales moved well clear with a 1m55.187s just a few minutes later, and bettering that to a 1m54.845s next time by.

This stood undefeated for the next hour, before HRC test rider Stefan Bradl began a stint at the top of the timesheets with a 1m54.658s. That time was eventually beaten by the other works team Ducati of Jack Miller – who spent much of the day evaluating a new aerodynamic package – with around two and a half hours remaining.

The Australian’s 1m54.367s kept him top of the pile for the next 30 minutes, before Saturday pacesetter Aleix Espargaro put the new Aprilia ahead with a 1m54.152s.

Eventually Espargaro’s reign was ended by Morbidelli’s former teammate Quartararo who, after a tough first day readjusting to his MotoGP bike, set the best lap of the test, the factory Yamaha rider clocking a 1m53.940s around 40 minutes from the finish. Quartararo’s lap remained top through to the chequered flag, the Frenchman heading Miller and Aprilia’s Espargaro.

Morbidelli was fourth on his SRT M1 ahead of Bradl and Zaro, while Vinales slipped back to seventh. 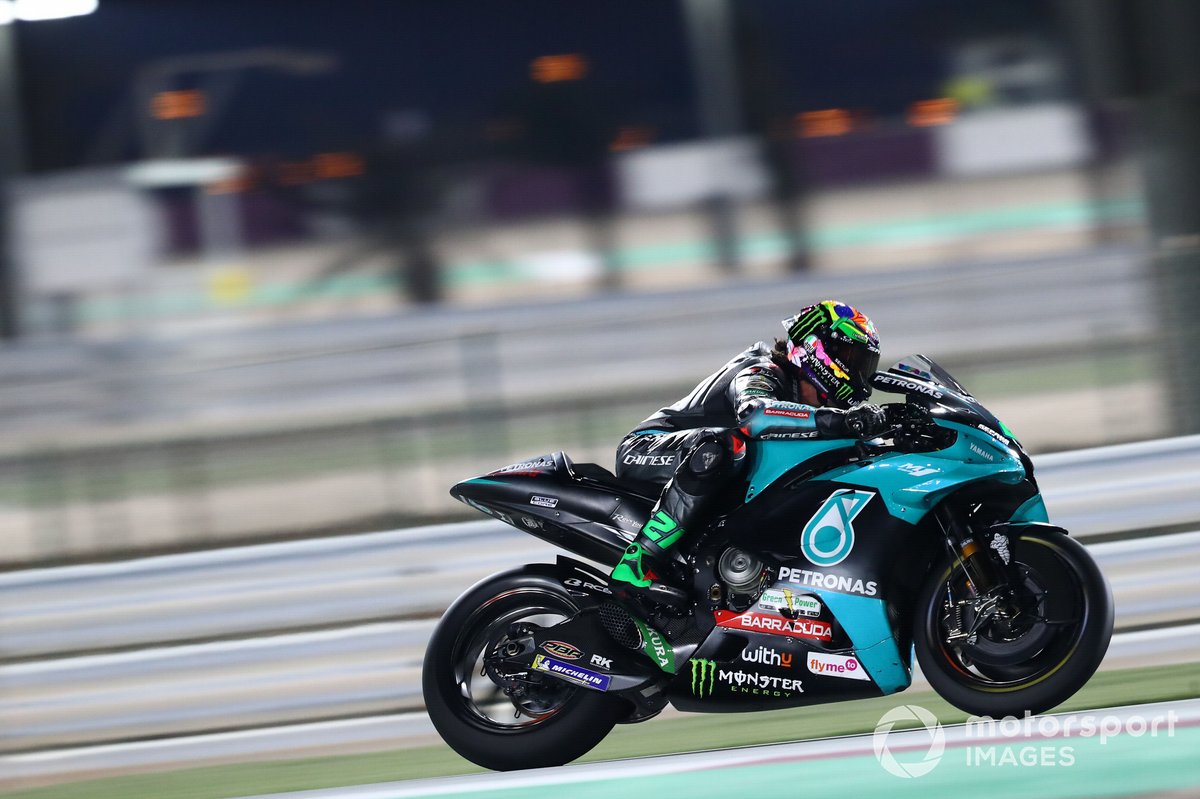 He headed reigning world champion Joan Mir, who was an early finisher on Sunday having spent his day evaluating Suzuki’s new chassis and various electronics set-ups.

Bagnaia and the second Suzuki rider Alex Rins rounded out the top 10, with KTM’s Miguel Oliveira 11th on the RC16 ahead of Honda new boy Pol Espargaro.

LCR’s Alex Marquez suffered another fall on Sunday, coming off at the last corner and doubling his team’s repair work after teammate Takaaki Nakagami also took a tumble. Pramac rookie Jorge Martin tallied up another crash after a heavy fall on Friday during the shakedown and was 19th at the chequered flag behind Avintia’s Luca Marini.

Marini’s team-mate Enea Bastianini was once again the fastest rookie in 16th after posting a 1m55.486s lap.

SRT’s Valentino Rossi, Tech3 duo Danilo Petrucci and KTM’s Brad Binder were the last of the full-time riders on the timesheets.