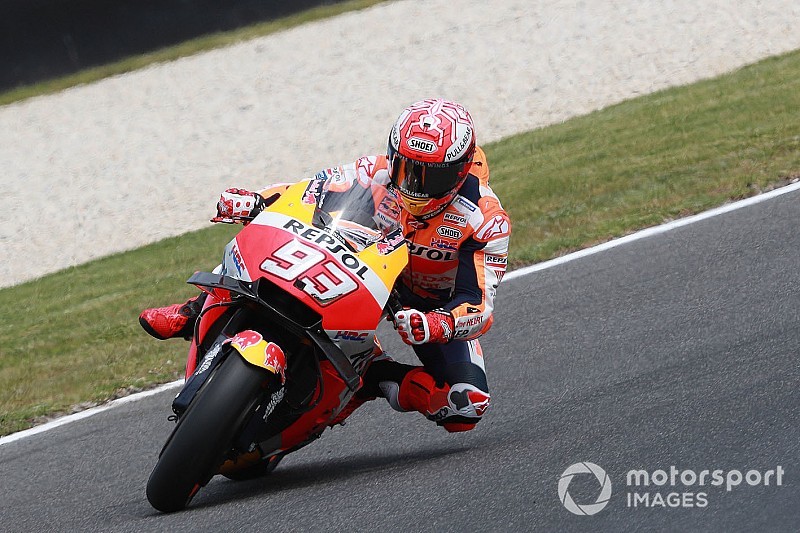 Marc Marquez says he will undergo surgery on his left shoulder after the end of the 2018 MotoGP season, but aims to have fully recovered by the middle of January.

Marquez dislocated his left shoulder while celebrating his fifth MotoGP title on the in-lap of the Motegi race, and later he revealed that it also happened several times during training over the season.

He called it his "weak point" of the season, but expects it to be "perfect" and fully recovered by the middle of January.

"My brother [Moto2 rider Alex] already had this operation, they put like a limit in the shoulder because is something that when it goes out many times, the bone gets smaller and smaller and then it is easier for it to go out," Marquez said.

"They just try to increase this bone by a blade, or a bolt, I don't know, and then will be better. Takes one month and a half to be 100 percent. For that reason I need to wait until December.

"I will do it first week of December and to be 100 percent to be again on the bike, middle of January.

"Maybe [the shoulder] was my weak point of the season. During the season it dislocated many times during training."

Marquez "slowed down" after Crutchlow crash

Honda endured a difficult opening day at Phillip Island with Marquez, Dani Pedrosa and Cal Crutchlow all crashing and the latter breaking his ankle.

Crutchlow crashed at Turn 1 in FP2, and Marquez said that after seeing his stablemate fall, he decided to be more careful there as he also had a couple of moments.

"I saw, I was far away, but somebody had the big crash in Turn 1 and then I realise when I arrive in the box that was Cal," explained Marquez, whose fall in FP1 was at the MG corner.

"When I saw that was Cal, I slowed down there because I had some moments, too. Dani crashed there this morning too so is one of our weak points. We arrive there and on the bike, I don't understand the front.

"But we did a change this afternoon and I start to understand in a better way. You need to be patient, this is a very special circuit, sometimes the base setup is not working here.

"Now is time to understand and on Sunday we will see, but our target is try to be faster and faster, and on Sunday be on the podium.

"But is true that our pace base setup during all the season, here, looks like not working in a good way."