Marquez: Lorenzo "not out of control" in crash 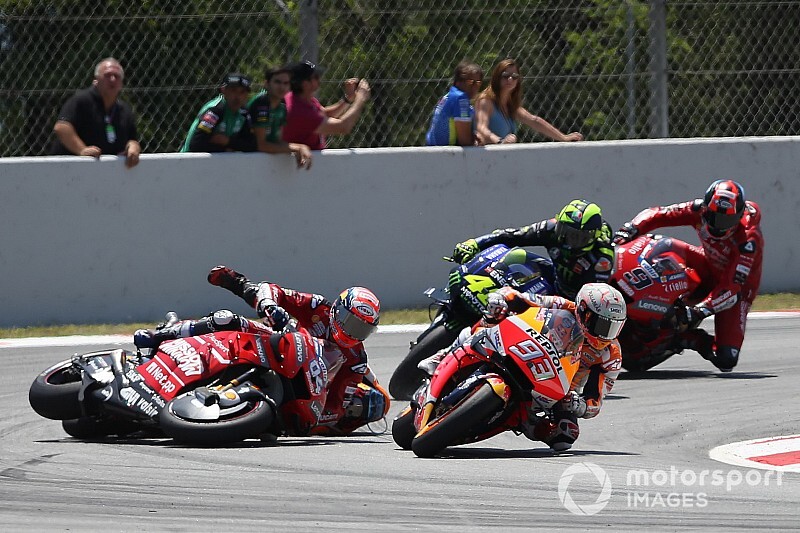 Catalan Grand Prix winner Marc Marquez says his Honda MotoGP teammate Jorge Lorenzo “was not out of control” when he caused a multi-rider crash on lap two of Sunday's race.

Lorenzo launched from 10th on the grid to run fourth at the start of the second lap, and went for a move on the inside of Yamaha's Maverick Vinales at Turn 10 for third when he lost the front of his Honda.

He slid into Vinales and Ducati's Andrea Dovizioso – who was was forced to check up while Marquez made a move for the lead – while the second Yamaha of Valentino Rossi then collided with Lorenzo's stricken bike.

Marquez admits he was “lucky” to avoid the incident, and defended his teammate from accusations of recklessness.

“Of course all the people will say 'Lorenzo was out of [control]', but he was not out of control,” Marquez insists.

“I was lucky because I overtake Dovi. Dovi went out of the [racing] line, Vinales was out more, and Jorge went in on the correct line, but unfortunately lost the front.”

He added: “It's a corner that is so difficult. When you have two, three MotoGP [bikes] in front, the slipstream is there and [incidents] can happen, like [my crash with Johann] Zarco at the end of the straight in Australia, or four years ago with [Andrea] Iannone and Jorge [at the same corner in '16].

LCR’s Cal Crutchlow echoed Marquez's view that his Honda stablemate was not “riding like a mad man”, but says Lorenzo has to take full responsibility.

“He never had the pace of them guys all weekend,” Crutchlow, who also crashed out of the race, said of Lorenzo.

“It was a racing incident, he crashed, he didn't mean to take them all out. I saw some things, saying Dovi made a mistake: Dovi got passed [by Marquez], so of course he was in that trajectory off the normal line.

“It was nobody's fault but Lorenzo's, but he never meant to do it, of course. And I have to say, he was not out of control. He's not riding like a mad man.”

“There was no way Jorge was making the corner, as well as Vale,” he said.

“Vale was heading for the grandstand as well. That's have the reason he got tangled up in that mess, whereas I went into the corner seventh and came out third.