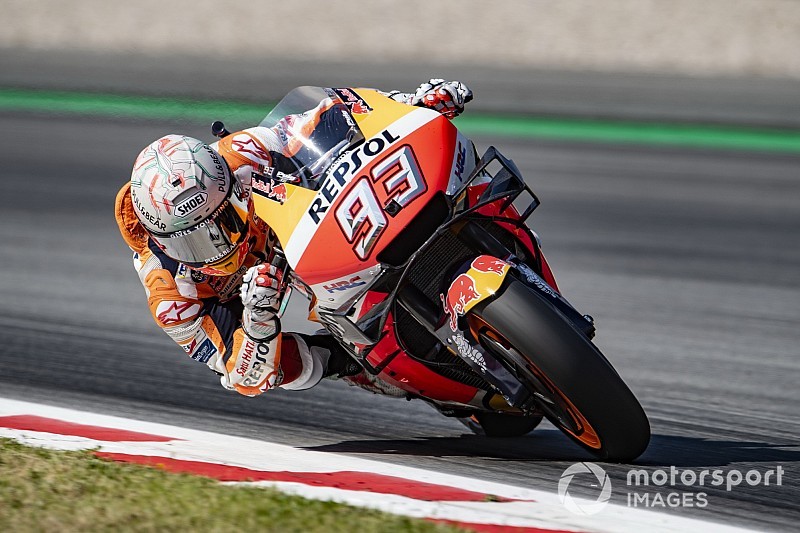 MotoGP championship leader Marc Marquez dominated the Catalan Grand Prix at Barcelona, after a crash for his Honda teammate Jorge Lorenzo took Andrea Dovizioso and the two factory Yamahas out of the race.

Lorenzo, who had charged from 10th on the grid to join the lead battle, fell at the sharp Turn 10 left-hander while trying to pass Maverick Vinales, taking down his compatriot, as well as Dovizioso and Valentino Rossi in the process.

Marquez overtook pole-sitter Fabio Quartararo off the line, but yielded to a fast-starting Dovizioso at Turn 1, and was soon also briefly overtaken by Vinales.

Having regained second place, the championship leader pressured Dovizioso, and snuck past the Ducati man on the second lap at Turn 10.

At that same corner, Lorenzo committed down the inside of Vinales for third place but hit the deck on corner entry.

His bike clattered into Dovizioso's rear, and the resulting crash removed both Vinales and Rossi – who had gone wide to avoid the pile-up - from the race.

The crash left Marquez on his own up front, and promoted Ducati's Danilo Petrucci to second place, the Italian unable to keep pace with the Honda man but managing to fend off both Suzuki's Alex Rins and Quartararo, who had been as low as ninth after the opening lap.

On the 10th lap, Rins launched his bike down the inside of Petrucci at Turn 1, briefly getting ahead but running wide on exit, allowing Petrucci to sweep around the outside of Turn 2.

The same sequence of events was repeated two laps later, and it was another two laps before Petrucci opened the door at the sweeping Turn 4 right-hander and allowed Rins to barge past.

But Petrucci then slipstreamed back ahead of Rins at Turn 1 on lap 17, and when the Spaniard tried another Turn 1 move next time by, he came in too hot, just avoided collecting Petrucci and nearly highsided off his GSX-RR, tumbling down the order.

Thus had unsettled Petrucci enough to allow Quartararo to get past just a few corners later with a move at Turn 4, but by that point Marquez was already more than five seconds clear.

The Honda man eased off for the final laps, taking the chequered flag 2.7s ahead of Quartararo, who celebrated his and his Petronas Yamaha team's first podium in MotoGP.

Rins recovered to fourth, passing the fading Pramac Ducati of Jack Miller on the final lap, with Miller keeping the other Suzuki of Joan Mir at bay at the line.

Pol Espargaro was the lead KTM in seventh, while his works teammate Johann Zarco rounded out the top 10, the pair split by LCR Honda's Takaaki Nakagami and Avintia Ducati's Tito Rabat.

Nakagami's LCR teammate Cal Crutchlow crashed out after a failed overtaking attempt on Miller with six laps to go, falling off in the gravel at Turn 4.

The two Aprilias of Aleix Espargaro and tester Bradley Smith were too among the retirements, seemingly coming together in a big opening-lap crash.

Marquez leaves Barcelona with a 37-point lead over Dovizioso, with Rins and Petrucci a further two and five points behind the Ducati man respectively.

The Barcelona MotoGP race as it happened