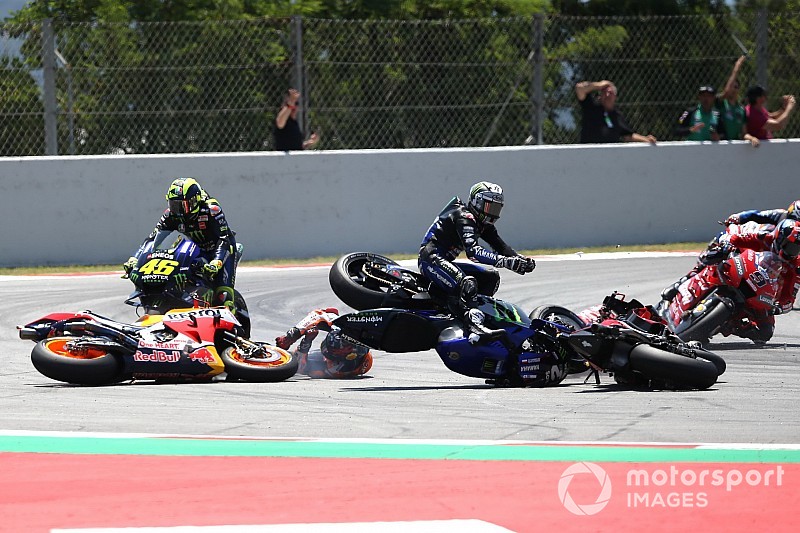 Lorenzo tried to pass Vinales at Turn 10 on the second lap of the Barcelona race, but tucked the front and collected the Yamaha rider and Ducati's Andrea Dovizioso, with Vinales' squadmate Valentino Rossi also unable to dodge Lorenzo’s stricken Honda.

Both Vinales and Dovizioso called for Lorenzo to be penalised, but race direction decided no further action on the incident was required.

Speaking ahead of this weekend's Dutch TT, Vinales stated that a precedent has now been set for more collisions like that to occur by riders making “crazy” starts.

“It's true you open the window for more actions like that when you don't penalise something like this, because it's easier to do it when you start crazy and try to overtake in places where it's difficult to do so,” he said.

“Anyway, it's not an excuse, I will try to do my best in Assen, I will start Friday at my best and finish the race as always.

“Normally I am a really respectful rider, but in Montmelo I was very angry because it was one race I think I was able to be in the front fighting for the victory.

“And one rider goes over the limit in one corner, makes a mistake, crashes. It's difficult to say right now, because a week has passed, everything has calmed down.

“For me, like many other riders, when they do that they get penalised. They [Race Direction] decide to not penalise because they have their own point of view.”

The pair have not spoken since the incident, but Vinales insists whether Lorenzo apologises to him or not “changes nothing” in how he approaches racing against the three-time champion.

“I didn't speak with him,” he added. “The team told me he came to the box, but he has my number, he can call me. If one rider apologises, I will accept, I will respect him and we can be friends again.

Zarco: Pedrosa feedback a boost after "six months of suffering"