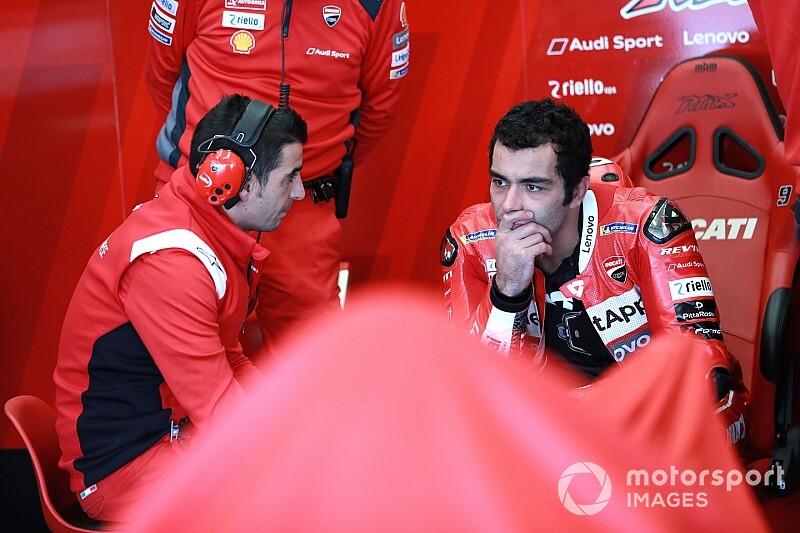 Ducati sporting director Paolo Ciabatti believes it is “just a coincidence” that Danilo Petrucci’s MotoGP form tailed off dramatically once he was handed a contract extension for 2020.

Petrucci had joined the works Ducati outfit on an initial one-year deal in 2019, but was confirmed for a further season in July, on the heels of a run of three consecutive podiums that included a famous maiden win at Mugello.

But these three rostrum finishes would end up his only ones of the season, and having scored 108 points in the first eight races before the renewal, Petrucci added only 68 in the 11 races following Ducati’s announcement.

“I think that the fact that Danilo’s performance was not the same after he signed the contract is just a coincidence,” Ciabatti said.

“Last year Jorge [Lorenzo] started winning on the Ducati after deciding to switch manufacturers, so I think it’s just a coincidence.

“Danilo started the season in a perfect way and then he had three podiums in sequence, winning a fantastic race in Mugello. He also did a good race, I would say, in Sachsenring [right after the renewal].

“But after the summer break something changed and obviously we are trying to work with him, trying to give him back the same level of confidence he had in the first part of the season – so far, without success.”

Petrucci’s campaign fell apart completely in the final stretch of the year, as he failed to break into the top eight in any of the last seven races.

He called a meeting with Ducati staff after a particularly poor outing at Aragon, but was unable to rediscover his early-season form, hindered also by minor injury problems.

“Obviously we know he has some peculiar riding style, mainly because of his size and weight,” Ciabatti continued. “So in certain conditions he is suffering more than other riders with tyre wear. We struggle in general when there is a low level of grip.

“Anyway, we think Danilo is a rider who is capable of fighting for podiums and winning races, we just need to work with him and try to bring him back to what he showed he was able to do in the beginning of the season.

“So, we have confidence in him and we will work with him also for next year to bring him back to where he was in the first part of 2019.”