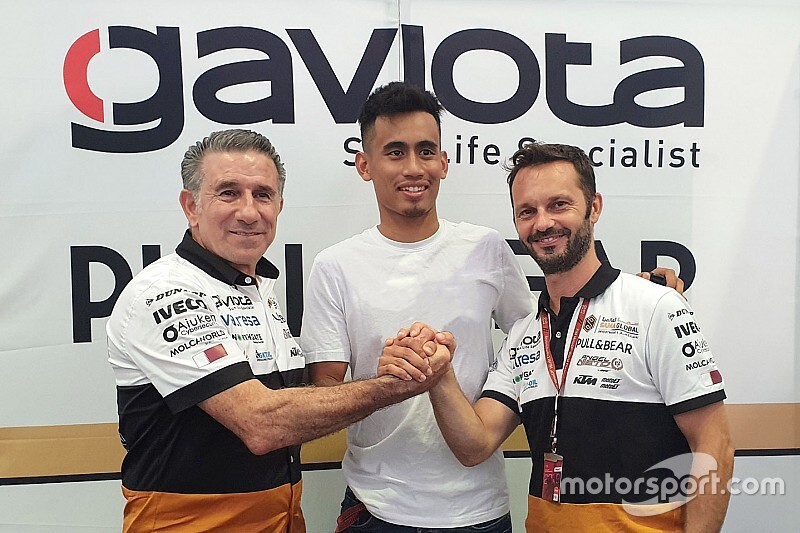 Outgoing Tech 3 MotoGP rider Hafizh Syahrin will return to the Moto2 class in 2020 with the Angel Nieto Team.

Syahrin made his MotoGP debut last year when he was called up as the last-minute replacement for Tech 3’s Jonas Folger, who was forced to sit out the season to continue recovery from Epstein Barr syndrome.

A regular points scorer, Malaysia’s first MotoGP rider secured a sophomore year with Tech 3 in 2019 as it switched to KTM, but has found adapting to the RC16 tough and has just six points to his credit relative to rookie teammate Miguel Oliveira’s 29.

Syahrin was handed his marching orders from Tech 3 earlier in the year to make was for Moto2 frontrunner Brad Binder, and has been working on a sealing a top seat in the intermediate class.

This will be an all-new line-up for the Nieto squad, with current rider Jake Dixon seemingly heading to SRT to partner Xavi Vierge, while Xavi Cardelus looks unlikely to remain on the Moto2 grid.

The Nieto team currently runs KTM chassis, but is yet to announce its chassis plans for 2020 with the Austrian manufacturer pulling out of the class at the end of the year to focus on MotoGP and Moto3.

Syahrin enjoyed mild success in his first Moto2 career. In his second wildcard appearance at Sepang in 2012 he narrowly missed out on a podium in fourth – though was later promoted to third when Anthony West was excluded for a doping infraction.

The Malaysian rider twice finished inside the top 10 in the Moto2 standings in 2016 and 2017 with the SRT team, and scored two podiums proper in ’17 with two third-place finishes in wet races at Misano and Motegi – though he was later promoted to second at Misano after race winner Dominique Aegerter was disqualified for running illegal oil.