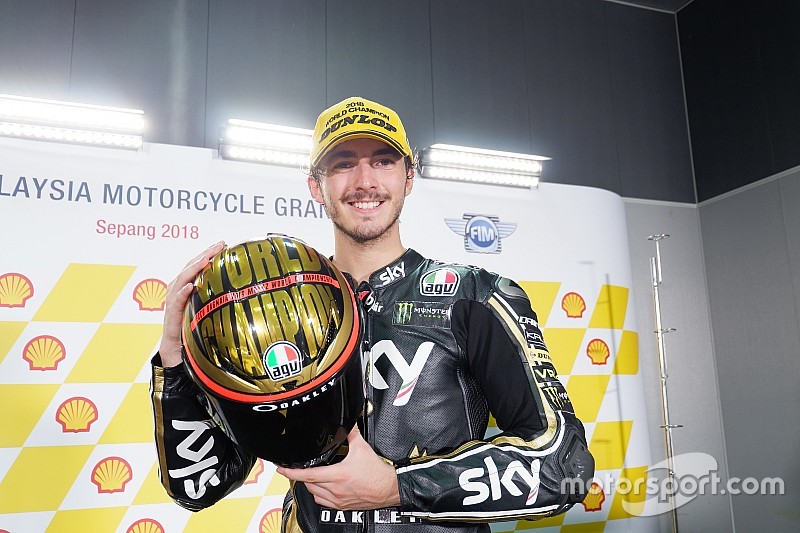 Bagnaia arrived in Malaysia 36 points clear of Oliveira, meaning he could afford to finish outside the points as long as Oliveira didn’t end up in the top two.

The 2019 Pramac Ducati MotoGP signing was immediately on the move when the 18-lap race began, jumping up from sixth to second on the opening lap.

Oliveira slotted himself right behind Bagnaia and passed him into Turn 4 on lap seven, but second place simply wasn’t enough to keep the title fight going to the Valencia finale.

Bagnaia was declared champion, having built an unassailable 32-point lead over Oliveira with only 25 on offer in the final race.

It was Marini who made the best start from the front row, sprinting to the lead ahead of the battling pair of Bagnaia and Oliveira.

The two championship protagonists traded places several times before Oliveira made a decisive move at the start of lap seven to secure second, and then set about chasing Marini for the lead.

Marini ran wide at turn 1 on lap 13, bringing Oliveira into contention, but the Sky VR46 rider recouped the place immediately to build a small buffer again.

He held on to score his first victory of the season, bettering his second place result from the Czech Republic.

Bagnaia dropped into the clutches of Mattia Pasini, but did enough to finish third - and with it clinch the Moto2 title ahead of his graduation to the premier class.

Polesitter Marquez recovered from a scruffy opening lap to run as high as fifth, but faded towards the latter stages of the race and ended up seventh.

Ajo’s Brad Binder was next up in eighth, while Marcel Schrotter (Intact) and reigning Moto3 champion Joan Mir (Marc VDS) completed the top 10.