McLaren, which last ran a full-season ‘works’ team back in 1979, teamed with Andretti Autosport-Honda for Fernando Alonso’s entry into the 2017 Indianapolis 500 in which he led 27 laps and starred until the engine failed in the closing stages.

The British squad returned with Alonso to Indianapolis Motor Speedway as a standalone team this past May using Chevrolet power, but narrowly and infamously missed out on qualifying for the 103rd running of the Memorial Day Weekend classic.

Given McLaren’s rocky relationship with Honda in Formula 1, the newly named Arrow McLaren Racing SP squad will run two Chevrolet-powered cars. This is a significant departure for Schmidt and Peterson, who have run Honda power in IndyCar since taking over the remnants of the ill-fated FAZZT squad at the end of the 2010 season.

McLaren built a strong legacy in Indy car racing in the 1970s, both as a works team, and through other teams – notably Penske – running McLaren chassis. On three occasions the Indy 500 winner was racing a McLaren (Mark Donohue in 1972, Johnny Rutherford in ’74 and ’76), while Roger McCluskey in ’73 and Tom Sneva in ’77 landed the Indy car championship driving McLarens. By the time the brand pulled out of Indy car racing at the end of 1979, it had amassed 28 race victories.

A statement from McLaren revealed: “The partnership will see the infrastructure of Arrow SPM underpin the team’s operations, while McLaren adds technical expertise, commercial experience and marketing strength to enable the new entity to perform at the highest competitive level and regularly challenge for wins and the series title. Arrow SPM co-founders Sam Schmidt and Ric Peterson continue in their current roles.

McLaren CEO Zak Brown, who in April stated that McLaren’s full-time return to IndyCar was more a case of “when” rather than “if”, said: “IndyCar has been part of McLaren since our early years of racing, and the series today provides not only a commercial platform to continue to grow our brand in North America, but competition with some of the best teams in international motorsport.

“This team provides McLaren with the right synergy as a strategic partner for our return to the sport. We believe together we can help each other achieve our mutual ambitions. Sam Schmidt and Ric Peterson have built a solid foundation and we look forward to working together to take the team to the next level. 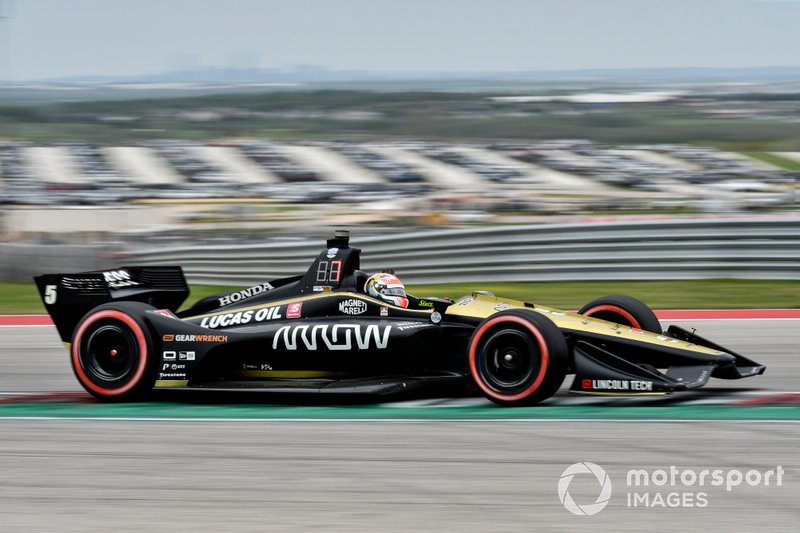 “I’m absolutely delighted that we will expand our relationship with Arrow Electronics across both F1 and IndyCar, while renewing our long affinity with Chevrolet as our engine partner. McLaren and Chevrolet have a special history together in North America [achieving five straight Can-Am championships 1967 through ’71] and it is fitting they are part of our full-time return to IndyCar.

“We come to IndyCar in full respect of the sport, our competitors, the fans and the task ahead. At our core, we at McLaren are racers and where there’s competition that puts us to the test, we will race. The NTT IndyCar Series provides such a challenge.”

De Ferran, who with Team Penske won the 2000 and ’01 CART Indy car titles and the 2003 Indy 500 before retiring from open-wheel competition at the end of that season, joined McLaren in July last year.

He said: “IndyCar is a natural fit for McLaren, given our legacy and determination to succeed at the top levels of international motorsport. Our ambition, over time, is to consistently compete for wins and championships.

“We acknowledge the challenge ahead of us but McLaren is committed to this partnership and to supporting the team as a whole.”

Schmidt and Peterson, with whom Arrow last off-season became full team partners rather than “merely” sponsors, have achieved seven wins together since IndyCar’s current turbo era began in 2012.

“I’m extremely proud of the team that Ric and I have built and that a legendary brand like McLaren Racing has decided to partner with us to form Arrow McLaren Racing SP to continue our march to the top of IndyCar,” said Schmidt.

“Arrow is a tremendous partner which has been integral to our growth as a team since 2015 and to the creation of this new partnership. The combined technical resources and commercial opportunities both McLaren and Arrow bring to the table provide a winning combination.”

Added Peterson: “I’m really excited that we could pull together our long-term partner Arrow and forge a new partnership with McLaren to become a unified force.

“I’m equally thrilled that Sam and I are able to continue on in our long-standing relationship together and maintain our ownership position in the company. I can’t wait to see what the future holds.”

Mike Long, chairman, president and CEO of Arrow Electronics, stated: “Advancement in automotive technology continues to be a powerful growth driver for our business. We are delighted to see our partners join forces in a way that provides an even broader platform and showcase for Arrow’s engineering and innovation.”

Jim Campbell, US VP of performance and motorsports at GM commented: “Chevrolet and McLaren have a storied history of racing together, going back to the mid-1960s. We have always had tremendous respect for Zak Brown and Gil de Ferran, as well as for Sam Schmidt, Ric Peterson and Mike Long. We are looking forward to partnering with the entire Arrow McLaren Racing SP team as we prepare for the 2020 IndyCar season.”

Could Nicholas Latifi, current Formula 2 ace, be part of the new team's plan?

The identity of the two drivers for Arrow McLaren Racing SP have not been confirmed but the new deal would appear to end Arrow SPM’s partnership with James Hinchcliffe a year ahead of time.

The Canadian 32-year-old, who is in his fifth season with Schmidt and Peterson and who has scored the last three wins for the outfit, has strong ties with Honda Canada, seemingly making him incompatible with a Chevrolet-powered team.

Thus Hinchcliffe could become a fully backed free agent, which is why several Honda-powered teams have been sounding out potential new members in order to rapidly expand their squads for 2020 and potentially accommodate the rapid and personable 32-year-old who has six IndyCar wins to his name.

Ex-Formula 1 driver Marcus Ericsson, an IndyCar rookie, is also thought likely to become a victim of the upheaval, despite flashes of promise including a runner-up finish in the second Detroit race.

The 26-year-old Brazilian won the British Formula 3 championship in 2011 and finished third in points in GP2 (now Formula 2) back in 2014. He is the reigning IMSA WeatherTech SportsCar Championship Prototype title-holder, with Action Express Racing.

Another strong contender is believed to be Nicholas Latifi, whose father Michael is an investor in McLaren, but who is currently test and reserve driver for Williams.

The 24-year-old Canadian is at present racing for DAMS in Formula 2 and lies second in the points table with four wins to his credit. But with Williams holding little appeal as it struggles at the back of the F1 grid, and McLaren perfectly happy with the performances of Carlos Sainz and Lando Norris, Latifi is unlikely to find a competitive F1 ride for 2020.

As for Alonso, Brown said as recently as last month that the two-time F1 world champion is not interested in running a full IndyCar campaign although it remains logical to expect Arrow McLaren Racing SP to run an extra entry for the Indy 500.

This would give Alonso the chance to complete motorsport’s unofficial 'Triple Crown', having already nailed Monaco Grand Prix and Le Mans 24 Hours honors.

Daly to race for Andretti Autosport in IndyCar finale