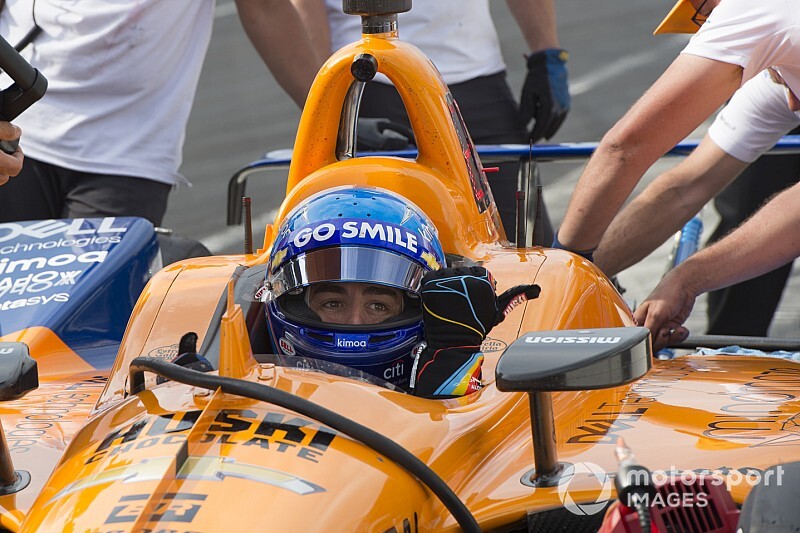 Both McLaren Racing’s Fernando Alonso and Arrow Schmidt Peterson Motorsports’ James Hinchcliffe will have to join the last chance qualifiers’ shootout having failed to lock themselves into the Top 30 qualifiers for the 103rd running of the Indianapolis 500.

Alonso was 33rd after all 36 drivers made their initial qualifying runs, while Hinchcliffe was last after a heavy crash in Turn 2 on his opening lap.

The McLaren driver eventually made five attempts to get himself into the field, his last one – an average of 227.244mph – getting the job done only temporarily. Improvements from such as Dreyer & Reinbold Racing’s JR Hildebrand, Ben Hanley of DragonSpeed, and Rahal Letterman Lanigan Racing-Honda’s Jordan King and Graham Rahal put them well out of the danger zone and bumped Alonso to 31st.

“We didn’t really have the speed,” said Alonso. “So we are where we deserve [to be] today. Hopefully tomorrow we have another chance to be in the race. If we can take it, OK, if we don’t take it, it’s because we don’t deserve it. I’m happy with that anyway.

When asked what his team can do overnight, he replied: “To be honest not much, I think it has been the whole week the speed has not really been there in the car. We will not find it in one night, so we will try and do a good and clean run and hopefully that will put us in the top three positions.”

Following his shunt, Hinchcliffe went out in the #5 T car but couldn’t find the speed to get in the show.

This pair will thus join Kyle Kaiser of Juncos Racing, Sage Karam in the second DRR car, and Carlin Racing’s Max Chilton and Patricio O’Ward in the Bump Day shootout for the final three slots on the 33-car grid.

Following the initial runs, both Chip Ganassi Racing-Honda drivers improved their times, Felix Rosenqvist taking a second retake just to ensure himself a place on the grid.

Conor Daly made a big leap to get into 11th in the fifth Andretti Autosport-Honda, and his teammate Alexander Rossi edged ahead of Harding Steinbrenner Racing’s Colton Herta – but only temporarily. The Circuit of The Americas winner would later head out with little more than an hour left on the clock and the car trimmed out a little more to grab fifth and the honor of fastest Honda driver of the day

Marco Andretti and Helio Castroneves both made attempts to get into the Fast Nine but failed and will start 10th and 12th respectively.

Weather allowing – and it's looking shaky at best – the schedule for tomorrow is as follows:

Priority will be given to the Last Row contenders over the Fast Nine contenders should bad weather heavily affect the day.

Alonso on last chance: “If it’s not enough, it’s what we deserve”