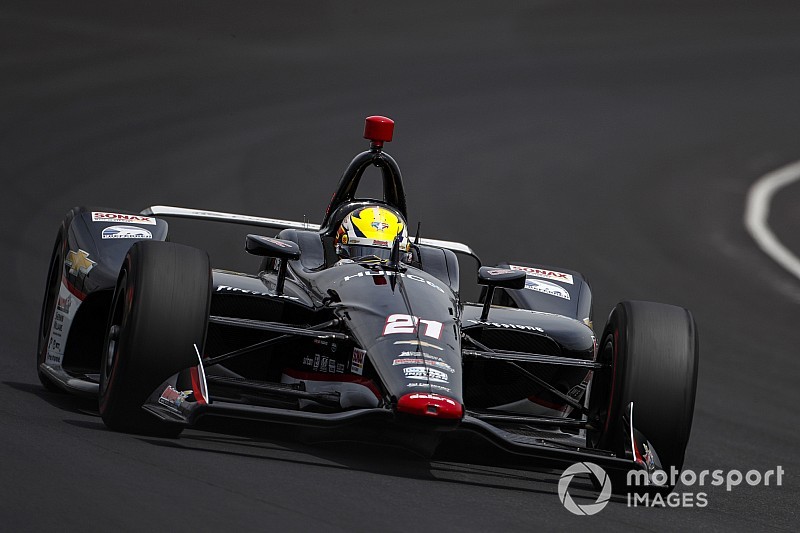 Spencer Pigot has put Ed Carpenter Racing-Chevrolet on provisional pole, ahead of defending race-winner Will Power, but Fernando Alonso’s McLaren-Chevy is not yet in the field after suffering a right-rear puncture.

This was unthreatened until Will Power’s super-consistent run in the #12 Team Penske-Chevrolet which veered only from 230.433 to 229.836, the resulting average being a mere 0.002mph from Pigot’s benchmark, despite the track temperature having increased by 10degF.

Three-time Indy polesitter Ed Carpenter had nothing for his employee, his average being around 0.75mph off the top spot, but when the third ECR car, the Scuderia Corsa entry of Ed Jones clocked 240mph down the back straight and set an opening lap of 231.015mph Pigot could be worried. However, over the next four laps the #63 car got looser and looser, with the track temps now 15deg higher than during Pigot’s run, so that his final lap was only 227.865mph and he fell to third with an average of 229.440.

That became third soon afterward, when Simon Pagenaud produced an excellent run to slot third in the #22 Penske behind Pigot and Power.

Fernando Alonso had a poor run, starting out at 226.971mph but lost 1.9mph on his second lap and had to come right out of the throttle at one point on Lap 4 and dropping to 223.825mph.

Sage Karam had an even worse run, brushing the wall exiting Turn 2, and then backing right off on Laps 3 and 4. Jordan King’s initial attempt in the extra Rahal Letterman Lanigan Racing-Honda was halted on its warm-up lap when IndyCar threw a yellow flag to allow the AMR Safety Team to scan the track for whatever debris cut Alonso’s tire. King’s run was bizarre starting slow – 226.187, then up to 227.871, way down to 225.816 and then up to 226.662 again. Certainly he was the only driver to produce a faster speed on his fourth lap than his first.

Helio Castroneves was struggling with the track being the hottest it has been all week, averaging 228.523, but he has looked a tick slower than the other Penskes when comparable for most of the week. This point was emphasized in the very next run when teammate Josef Newgarden slotted into fourth, just behind Pagenaud and ahead of Jones, having turned an initial lap above 230mph.

Oriol Servia declared his Team Stange with Arrow SPM car the most consistent he has ever run in qualifying over the four laps, outpacing even 2008 Scott Dixon’s Chip Ganassi Racing-Honda, but he couldn’t quite match the pace of rookie Arrow SPM driver Marcus Ericsson who is a highly impressive 12th.

JR Hildebrand’s Dreyer & Reinbold Racing-Chevrolet suffered a major drop-off from first lap to fourth – 229.2 to 224.3 – and fell toward the back of the field.

Rookie Colton Herta’s effort in the Harding Steibrenner Racing-Honda eclipsed all the Andretti Autosport-Hondas to grab seventh with the penultimate of the initial runs, bumping Marco Andretti out of a Fast Nine slot.

Ben Hanley got stuck in sixth in the DragonSpeed-Chevrolet so lost momentum and dropped from 227.283mph to 224.841mph across the four laps. The ill-starred Juncos Racing team had to wait to make its initial run when Kyle Kaiser stalled as he went to pull away from pitlane. A couple of wiggles on his fourth lap hurt him but he wound up 34th.

Qualifying opportunities will continue until 5.50pm. At that time, the nine contenders for the Firestone Fast Nine will be decided, while positions 10 through 30 will be locked in place. The six cars outside that Top 30 – currently, Hanley, Pato O’Ward, Alonso, Karam, Kaiser and Hinchcliffe – will fight over the three places in the last row.

If Sunday is rained out, today’s Fast Nine qualifiers may be the 500’s first nine starters, so the pole might well be decided today.