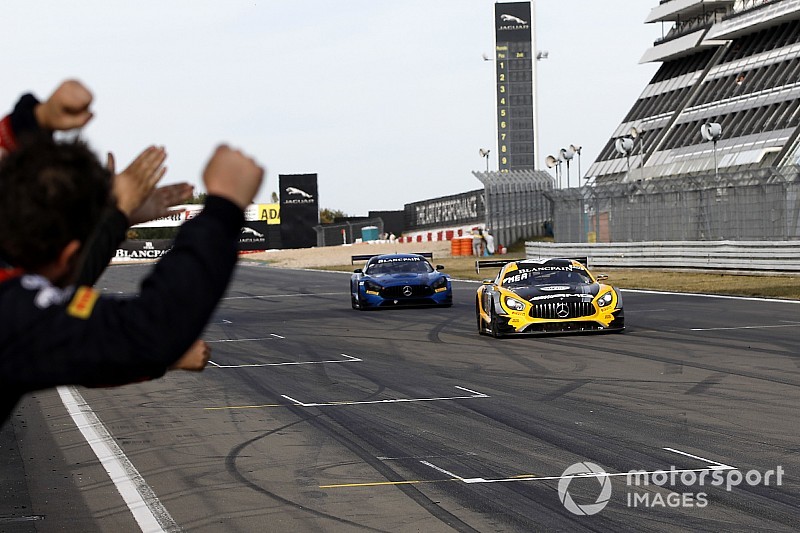 The victorious #88 Mercedes of Marciello and Meadows started the race in second and spent much of the afternoon behind the polesitting #6 Black Falcon Mercedes of Hubert Haupt and Luca Stolz before getting ahead after the pitstops.

Haupt crossed the line half a second behind the newly-crowned champions, with the #25 Sainteloc Audi of Simon Gachet and Christopher Haase finishing in third.

WRT Audi pair Alex Riberas and Christopher Mies had taken a nine-point advantage into the decider, having been promoted to victory on Saturday after the disqualification of the winning Grasser Lamborghini.

Fourth place would have been good enough to clinch the title, and a combination of a good pitstop and a strong opening stint from Mies put the #1 Audi in fifth, up from 14th on the grid.

A lengthy battle ensued for fourth with the #66 Attempto Racing Audi of Steijn Schothorst, with Riberas attempting an ambitious move on the Dutch driver with three minutes to go.

This allowed the sixth-placed #19 Lamborghini of Ezequiel Perez Companc to catch up with the battle, and after the three cars spent several corners disputing fourth Riberas went off track and was forced to retire with a puncture.

As a result, Riberas and Mies have to settle for second in the championship, despite taking three wins in 2018 to the two scored by Marciello and Meadows.

The #87 ASP Mercedes of Nicolas Jamin and Adam Christodoulou finished in sixth ahead of the #14 Lexus of Albert Costa and Christian Klien.

Original race one winners Mirko Bortolotti and Christian Engelhart were disqualified from the meeting ahead of the finale.

The pair had lost their victory when Engelhart was given a 30-second time penalty for illegally wearing his frontal head restraint over the shoulder straps of his harness.

Further footage then emerged showing Engelhart removing a glove and unbuckling his harness so he could remove the SD card from the driver-facing onboard safety camera and then destroy it.

The car was disqualified as driving with the unfastened harness, without a glove and without a safety camera operating were all rules transgressions.

A Grasser statement said "admitted full responsibility for the error" and offered his "sincere apologies" to the organisers, his team and Lamborghini.