Zhou’s Alfa Romeo was launched over the tyre barriers at the opening corner of the Silverstone race, having been caught up in a multi-car accident involving Russell and AlphaTauri’s Pierre Gasly.

Having been tripped upside down and skipping across the gravel trap, Zhou’s Alfa Romeo then rolled over the tyre barriers before getting wedged in a gap in front of catch fencing.

Although Zhou escaped serious injury and was extracted from the car by safety crews, Russell says the situation was far from ideal.

And having seen the accident close up, as he ran over to check on Zhou’s condition immediately after the crash, Russell said that some thoughts need to be given about safety improvements.

“In that position, he was stuck there,” said Russell when asked about what he made of the scene. “There's nothing he could have done.

“We need to have I think to avoid the car being stuck in such a fine gap, in the space between the tyre barriers and the metal fence. He was just stuck in there with nowhere to go.”

Russell explained that the incident had been triggered by him getting ‘swamped’ at the start as he made a getaway on the slower hard tyres.

“It was an incredibly scary incident, not just for him but I'm sure for everyone in the crowd as well,” he said. “It was not nice to see.

“We obviously took a gamble starting on the hards because I didn't do a good enough job yesterday in qualifying, and we were starting out of position.

“We knew it was going to be very tricky but I just got completely swamped by everybody at the start, and the next thing I know is I was in the side of Zhou. There are so many different emotions.” 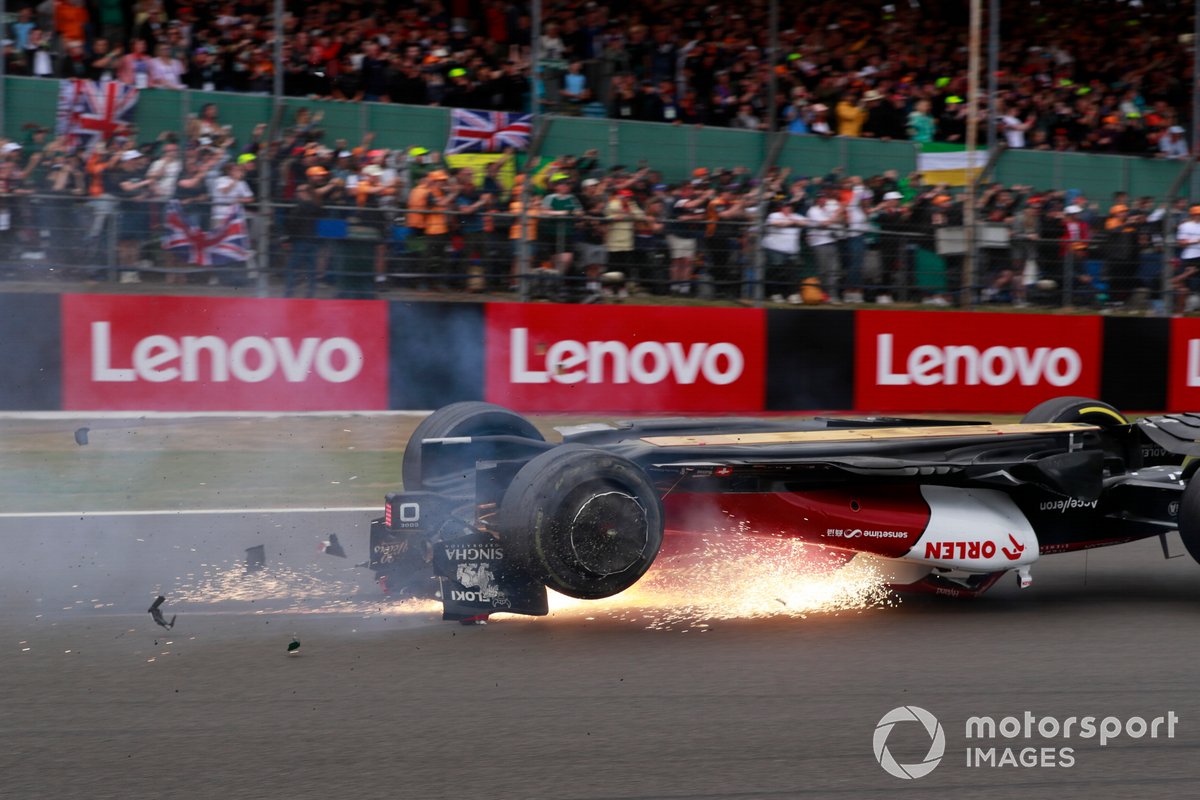 While relieved at Zhou’s escape, Russell expressed some annoyance at being unable to take the restart after marshals attended to his car immediately following the incident.

“When I came back I couldn't quite get the car started but I just wanted to check with my team,” he said.

“When I came back the car was already on the flatbed and they said we couldn't restart. So it's annoying because the only issue we had was a puncture.

“The car was generally fine. There was a little bit of damage, but nothing show-stopping.”

Later Russell was seen remonstrating with FIA technical delegate Jo Bauer about being told that the outside assistance meant he could not rejoin.

“So apparently, as soon as you get assistance, you can't restart,” he told Sky. “So it's very frustrating because the car just had the puncture. And there's no doubt we had the pace to come back to P6 today.”