One of Williams F1 team’s most beloved alumni, Riccardo Patrese, says that his relationship with the late Sir Frank Williams was based on “respect and friendship.”

By:
David Malsher-Lopez
Co-author:
Franco Nugnes
Listen to this article

The legendary team owner, whose squad scored seven drivers’ championships, nine constructors’ titles and amassed 114 wins, died on Sunday, aged 79 and there have been countless tributes paid already by many of those whose lives he touched.

Patrese was first signed by Williams for the 1988 Formula 1 season, but pointed out that he could have joined the newly formed Williams Grand Prix Engineering 10 years earlier. He and Alan Jones had raced at Shadow in 1977 – Patrese in his rookie F1 season – and Williams elected to take the more experienced Australian, who had scored a surprise victory at the Osterreichring.

Asked what Sir Frank was like, Patrese told Motorsport.com Italy, “He always proved to be a friend who had great sympathy for me since the beginning of my F1 career. He had already looked for me in 1977 when he was setting up the team that would later make history with the Fly Saudia colors. For the debut of his new team in 1978 he was debating whether to take me or Alan Jones.

“In truth, we were both waiting for a response from Shadow for a seat, and the priority was to stay with the team that would then become Arrows, because up until then Frank hadn't achieved much in F1. I remember I talked to Alan about what to do and we shared the choices: I stayed in Arrows, while Jones went to Williams. And I can assure you that it was his luck.”

Jones would rack up 12 wins at Williams from 1979 to ’81, took the 1980 World Championship and, together with Carlos Reutemann, he would deliver Williams its first two Constructors’ Championship titles in 1980 and ’81. Meanwhile, Patrese would struggle on with Arrows until being signed by Bernie Ecclestone for the Brabham team in 1982 alongside reigning World Champion Nelson Piquet.

Patrese would win one race in the Cosworth-powered BT49D in 1982, and one in the BMW turbo-powered BT52 the following year, but then departed for two torrid years at Alfa Romeo.

He returned to a Brabham team on a downward spiral in ’86 but his speed and dedication in trying to make Gordon Murray’s ‘skateboard’ BT55 fulfill its potential, and then trying to extract the most from Sergio Rinland’s handsome but unreliable BT56 impressed all team members, including Ecclestone. He had already decided to sell Brabham and focus on running FOCA, and knew that Williams needed a driver to replace Piquet, who was heading to Lotus.

“Frank had held me in high regard,” said Patrese, “and 10 years [after initial contact] I joined Williams on the advice of Bernie Ecclestone, who gave him my name for a test and a relationship that lasted five years. I lived through the best period of my career.”

Patrese tested that year’s dominant FW11B-Honda at Imola in the summer of ’87, adapted swiftly enough to the car to set a time that would have put him fourth on the grid for that year’s San Marino Grand Prix, and a deal was soon done. But before partnering Williams incumbent Nigel Mansell, Patrese would actually sub for him in the 1987 finale in Adelaide (below), following the Briton’s back injury incurred in an accident at Suzuka. 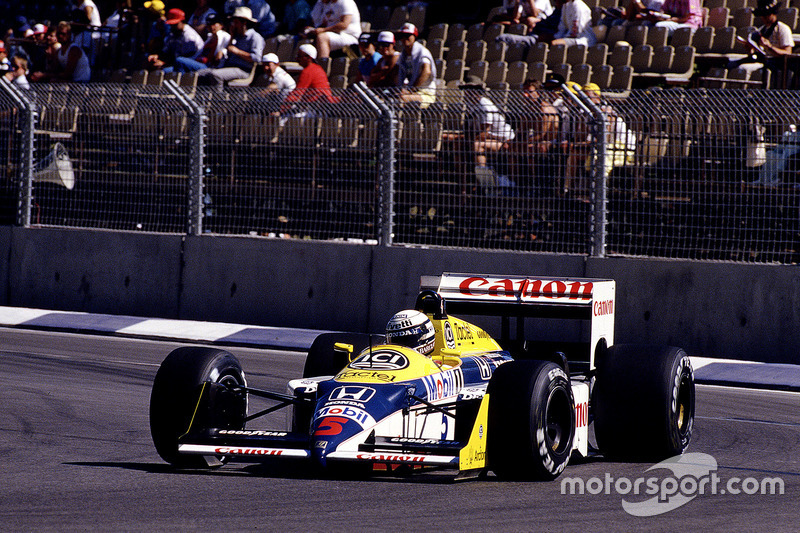 Patrese racing a great Williams car for the first time – subbing for the injured Mansell in the 1987 finale in Adelaide.

Those two outings in a truly great F1 car were a cruel tease for Patrese. Honda had decided to end its hugely successful Williams relationship a year early, and in ’88 its turbo units would power McLaren and Lotus. Williams was left with normally aspirated Judd V8s, and a shaky active-suspension system, which had to be ditched mid-season. Mansell and Patrese between them would score just seven top-six finishes (the only positions that earned points in those days), but there were brighter days ahead, with Renault’s normally aspirated V10.

Patrese was unlucky not to score the Williams-Renault combo’s first victory at Montreal in 1989 – his undertray came loose, allowing new teammate Thierry Boutsen to pass him – but his sheer consistency took him to third in the championship, and between them Patrese and Boutsen (who also won in Adelaide) took the squad to second in the championship behind McLaren-Honda.

Adrian Newey’s masterpieces, the FW14 (1991) and FW14B (’92), thrust Patrese back into the limelight, and he finished third and second in the championship. While Williams returnee Mansell took the majority of the wins, Patrese outperformed him in the first half of ’91 and scored three wins, and there should have been a couple more.

Williams and legendary technical chief Patrick Head team adored Patrese because had a well-controlled ego, was OK with playing the number two role to Mansell when necessary, providing trustworthy feedback and for always being prepared to endlessly test in an era when such things were permitted. In return, PAtrese enjoyed the most successful period of his career.

The Italian, now 67 and recovering from a hip operation, said: “Frank was one of the most important people in my F1 career and I had the honor of racing for five seasons in his team which was the most competitive of my time.

“With Patrick Head and Adrian Newey, very important results were achieved: it was a team in which the life of the driver was very hard, but I can say that the management was very transparent.

"Frank loved to speak several languages. Italy – especially at the beginning of his career – he had frequented a lot, finding a lot of help for his projects, so he mastered our language quite well. I didn't have to speak in English with him, only Italian, even when we had to discuss contracts, because I have always done everything by myself, without a manager in tow. We had a genuine relationship based on respect and friendship.

“I remember him as an affable person with whom you could speak freely and he had a commercial nature that allowed him to find important sponsors with a certain ease. He was a man who built something extraordinary ”.

Patrese agreed that, despite this mutual affection between driver and team owner, the atmosphere at Williams and the team’s prominence in that era meant it was a highly demanding environment for the stars of the team. 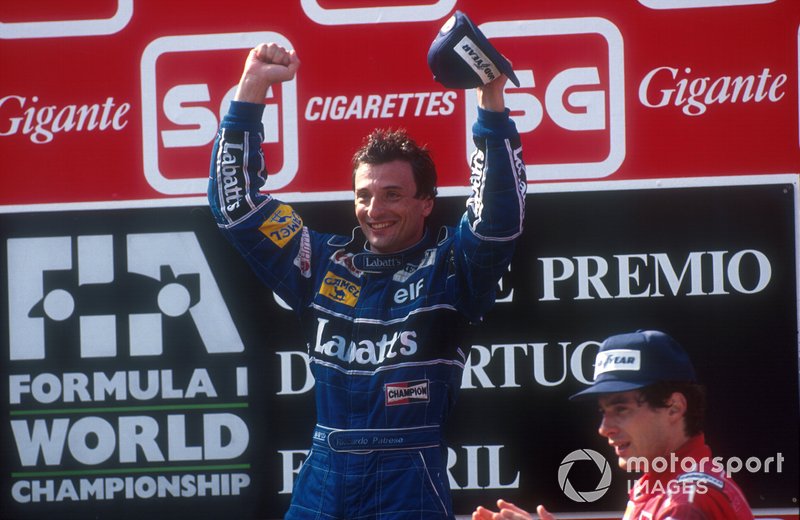 Patrese after one of his finest weekends in F1, Estoril 1991, after taking pole and victory in the Williams FW14.

“But it has to be like that,” he said. “For the drivers it was very hard because the expectations were always very high and every mistake was highlighted, criticized. But they were not only demanding with me: they also reserved the same treatment for Mansell. Years later I told Patrick that they were too soft with the [current] drivers and it showed in the results too! Today the pilots are kept in cotton wool and pampered."

Patrese said that Williams’ attitude and rock-hard resolve following the car crash that rendered him wheelchair-bound in 1986, had earned his admiration.

"After the accident in which he remained quadriplegic, my respect for Frank grew,” said Patrese, “because he was able to lead the team with great mental clarity for a long time, despite being in a very difficult physical condition.

“He was very persistent in taking care of himself so he reached the threshold of 80 years. In the end, he had to hand over the management of the team to his daughter and I think he suffered from the family leaving the team. I think at that point he let himself go a bit.

“Frank was a great character in our world and it is right to remember him as he deserves.” 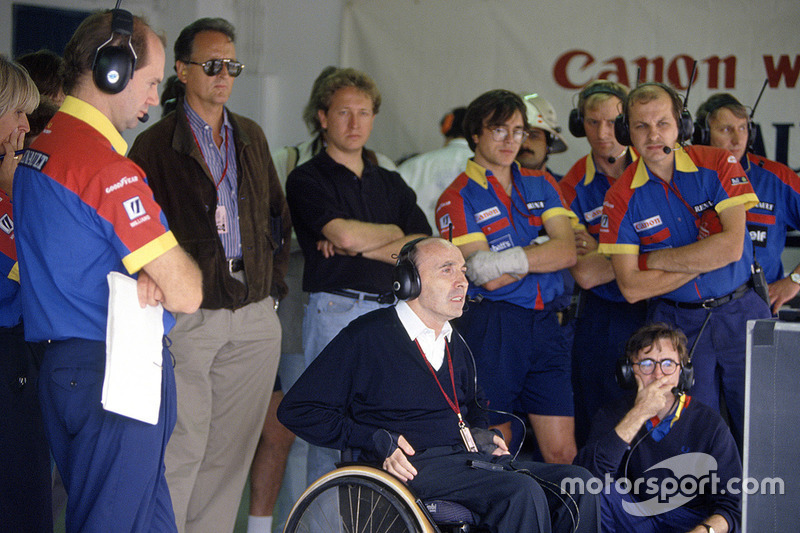 Frank and the Williams-Renault team – including Adrian Newey on the left – watching Mansell and Patrese crush the opposition in the 1992 French Grand Prix.