Following the announcement that the Belgian will make way for Lando Norris in the McLaren line-up next year, Vandoorne is a free agent – but his options of staying in grand prix racing appear limited.

Brown believes Vandoorne would be a natural fit at Toro Rosso, which will lose its top performer Pierre Gasly to the main Red Bull team and is not committed to retaining Brendon Hartley.

The lack of Red Bull juniors eligible for an F1 move in 2019 means Toro Rosso is edging closer to rehiring Daniil Kvyat, who was released from the programme last year.

“Stoffel's an outstanding race car driver. You know, ultimately, we look to the future and Lando's a future star.

“I think in a different environment Stoffel may excel more with a better race car.”

Vandoorne has been roundly outperformed by world champion teammate Fernando Alonso in his two years at McLaren, during which the team has struggled with an uncompetitive package.

“I think we've had a very poor race car for two years,” Brown conceded. “Someone like Fernando can adapt quicker, he's got so much experience.

“Stoffel was very close to Fernando, A lot closer than, as Fernando commented, some other teammates.

“If I look at those [Vandoorne's] debut races, besides Bahrain [in 2016], which was an impressive debut, but in the 2017 season he was going to racetracks and losing practice sessions, and I'm not sure he ever got the opportunity to get into a groove.

“And when you have a teammate like Fernando, who can draw on all that experience, and is recognised as the best guy or one of the best guys out there, Fernando's going to adapt to that situation [better].”

Asked whether he would phone other F1 teams in an effort to help Vandoorne remain on the grid, Brown said: “Yeah, I already have, and anything we can do to help Stoffel we will help him in a heartbeat, we consider him family, he's been outstanding to work with.

“Hopefully he remains in Formula 1, he deserves to be [here], but we have some racing activities that we are reviewing, and I wouldn't hesitate to keep Stoffel within the McLaren family if there was a seat available and he had a desire to race there.” 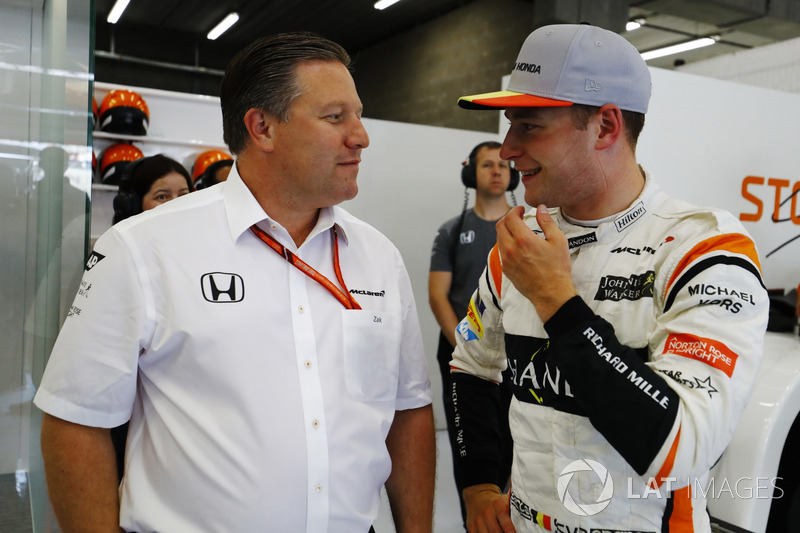 Ferrari, Mercedes on opposite ends in Singapore tyre picks