Lewis Hamilton knows he has “a lot of work to do” despite topping Friday’s practice sessions for the Formula 1 Turkish Grand Prix thanks to his impending grid penalty.

Hamilton led both FP1 and FP2 at Istanbul Park on Friday, setting a new track record thanks to the improved levels of grip around the circuit in its second running since returning to the calendar last year.

But the seven-time world champion is set for a mid-pack start at best on Sunday after Mercedes opted to take a new engine for his power unit before the start of practice.

By exceeding the season limit of three engines, the decision triggered a 10-place grid penalty for Hamilton, coming as a setback in his title battle against Red Bull’s Max Verstappen.

Hamilton felt pleased with how his Mercedes W12 car felt through Friday’s running in Turkey, but recognised that he faced a big challenge fighting his way back up the order in the race.

“We started off with a really good set-up,” Hamilton said.

“The first session was really strong. We made some changes, and the track obviously is evolving and feeling different when you get into the second session.

"[We] made some changes which were OK. I’m not sure it felt as good as it did in the first session in the second session.

“But we’ve got lots of good findings. So we’ll hopefully take those forward with us into the next one.”

Asked if he was 100% happy with his car’s feeling on Friday, Hamilton said he was “fairly close”.

“I don’t know how much more there is, but we always find something during the evening,” Hamilton said.

“So I definitely think I’ll be able to find just a little bit over tonight and hopefully into tomorrow if it’s not raining.

“I have a lot of work to do on Sunday, so either way, whatever the case, so I’m just going to try and focus on how I can get the best out of that.” 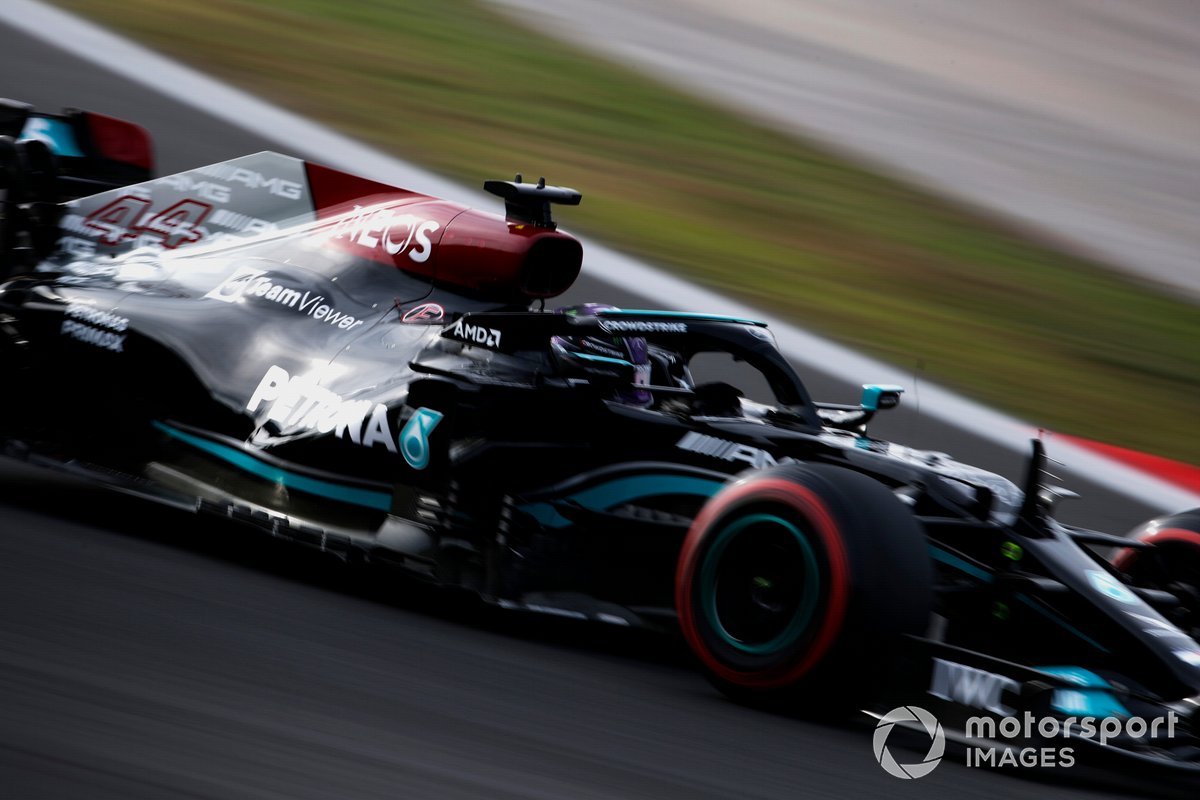 Hamilton said that despite needing a strong car in race trim to be able to pass cars, the team would not lose total focus on setting it up for qualifying due to the importance of a good qualifying position.

"I need to be on pole to limit the loss,” Hamilton said.

“Then of course I need to understand the car to be able to do the best in terms of long run.

“So [it’s] just trying to find the right balance. It’s not really different to any other weekend.”

Mercedes opted against taking a complete set of power unit elements for Hamilton as it did not believe it was necessary, avoiding a back-of-grid start that Verstappen and Valtteri Bottas faced in Russia.

But Hamilton still thought many of the midfield cars would be tricky to overtake, having spent much of the race in Russia trailing the McLaren of Daniel Ricciardo and seen Ferrari’s Charles Leclerc finish Friday second-fastest.

“[The Ferraris are] going to be hard to pass, as are [Alpine] and the McLarens,” Hamilton said.

“They seem to be improving and improving more and more through the year. I don’t know where that’s coming from, whether they’re bringing upgrades, I don’t know. It’s not really my focus.

“But it’s good to see them getting stronger, and I hope they’re strong next year.”