By:
Jamie Klein
Co-author:
Heiko Stritzke
Listen to this article

Estre, Michael Christensen and Matteo Cairoli secured Porsche's 13th victory at the wheel of the 'Grello'-liveried #911 Porsche 911 GT3 R in what was the shortest-ever running of the German endurance classic, which was suspended for more than 14 hours owing to fog.

The weather interruption effectively reduced the race to a three-and-a-half hour sprint, with Estre doing most of the work once the race resumed as he came out on top in a strategic battle with the surviving #98 ROWE Racing BMW M6 GT3 of Sheldon van der Linde.

Estre said the significance of the victory was heightened by the fact he had come so close to winning in the 'Grello' machine in both 2018, when teammate Romain Dumas crashed out of the lead in the night, and 2019, when Laurens Vanthoor picked up a penalty for speeding in a slow down.

Last year Manthey didn't participate as the team, along with a number of Porsche works drivers, was withdrawn from the race due to COVID-19 fears.

"It was full attack," recalled Estre, who took the restart down in 11th place but soon charged up the order. "Every driver was pushing, qualifying lap after qualifying lap.

"There was a not a lot of margin out there, and I could come back to the front and some other cars did some mistakes. We just stayed out there, good pace for the whole second part of the race, and I think was the key to win this one. 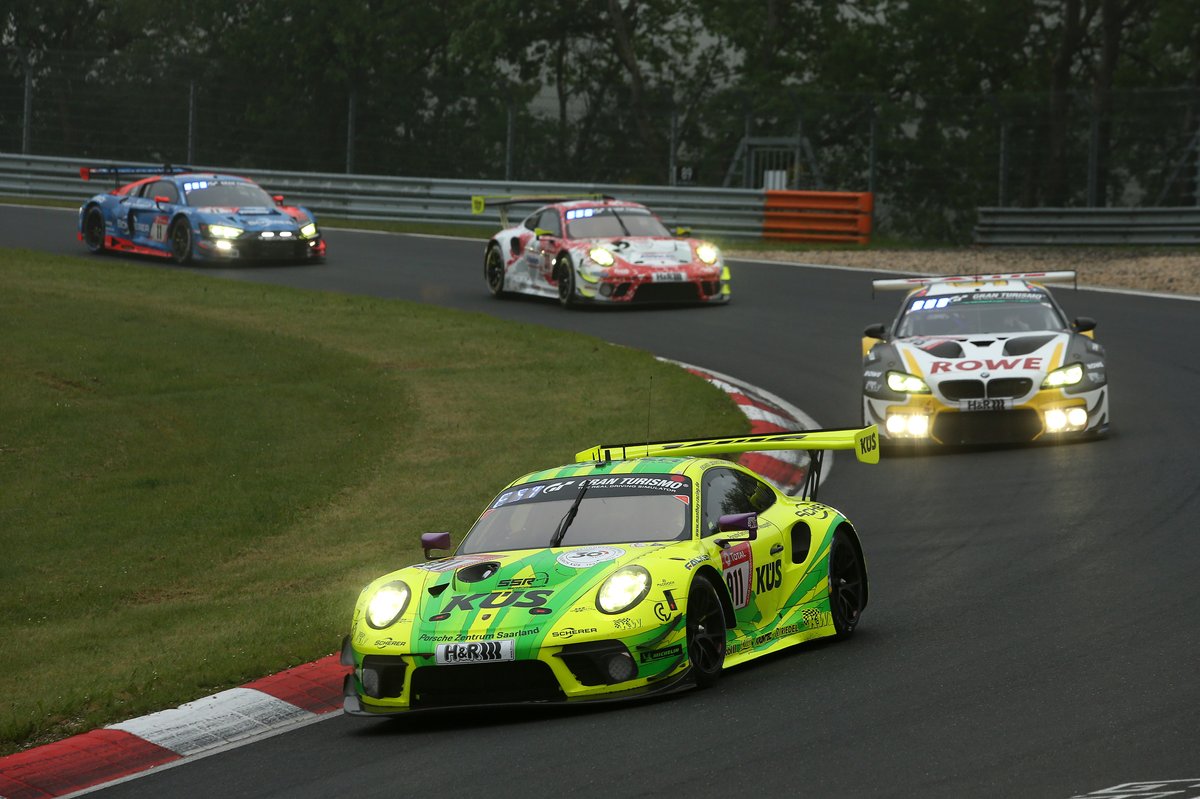 "It feels really good because we were close in 2018, 2019 with the 'Grello' and in the end we didn’t make it for several reasons, so this feels like the accomplishment of this hard work and the good pace we had for the past three or four years.

"To do it on the 25th anniversary of Manthey is great. Really happy for Olaf [Manthey, team founder] and all of the team, because driving the 'Grello' in the Nurburgring 24 Hours is something special and to win it is unbelievable."

With the pole-sitting #1 ROWE BMW knocked out of contention with a very long first post-restart pitstop and then a terminal electrical problem, it was the #4 HRT Mercedes-AMG GT3 that appeared to be in the best position to win the race immediately after the restart.

That was until Maro Engel got tangled up with backmarkers at the Tiergarten complex at the end of the lap and suffered a heavy crash that ended any realistic hopes of a Mercedes win.

Speaking to Motorsport.com, Estre admitted he wasn't sure whether the Manthey Porsche had the outright pace to live with the HRT Mercedes had it not been for Engel's accident.

"This the question which I’m happy not to have to answer on track," said the Frenchman. "They were a bit quicker than us on the restart, but also I was a bit fighting too much at the beginning and killed a bit my tyres.

"I think we got stronger towards the end, better tyre choice and better balance towards the end, but it would have been a tough fight. It’s a shame for them, but that’s the Nurburgring. You have to go through [the race] without doing mistakes. That’s the way it is here at the Nordschleife." 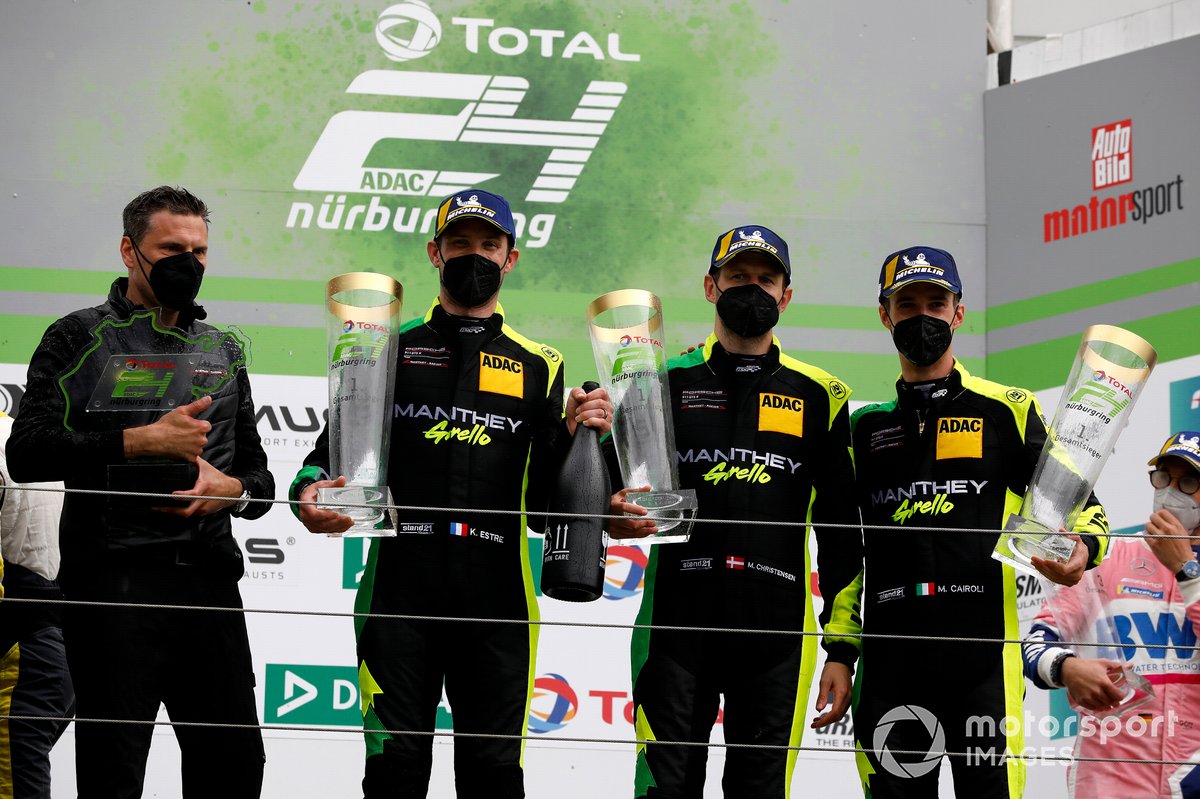 Christensen offered a similar view to Estre, telling Motorsport.com: "They [the #4 crew] were definitely strong from the first lap of the race, and we knew they would be a strong car all the way through the race.

"This will always be a question mark that we don’t know [the answer to]… they were strong, but we ended up winning. You have to stay there until the end."

Estre said the reason the Manthey Porsche struggled in the evening hours prior to the race being stopped was a "wrong decision" on strategy, a reference to tyre selection in the tricky conditions.

Cairoli was at the wheel at the time and lost around a minute relative to the leaders as he survived a brush with the barriers, although this gap was effectively wiped out by the red flag.

"I think we were using the medium tyres in that moment," Cairoli explained to Motorsport.com. "It was really hard to keep the car on the road because of the low temperatures. The mediums were too hard for those conditions. 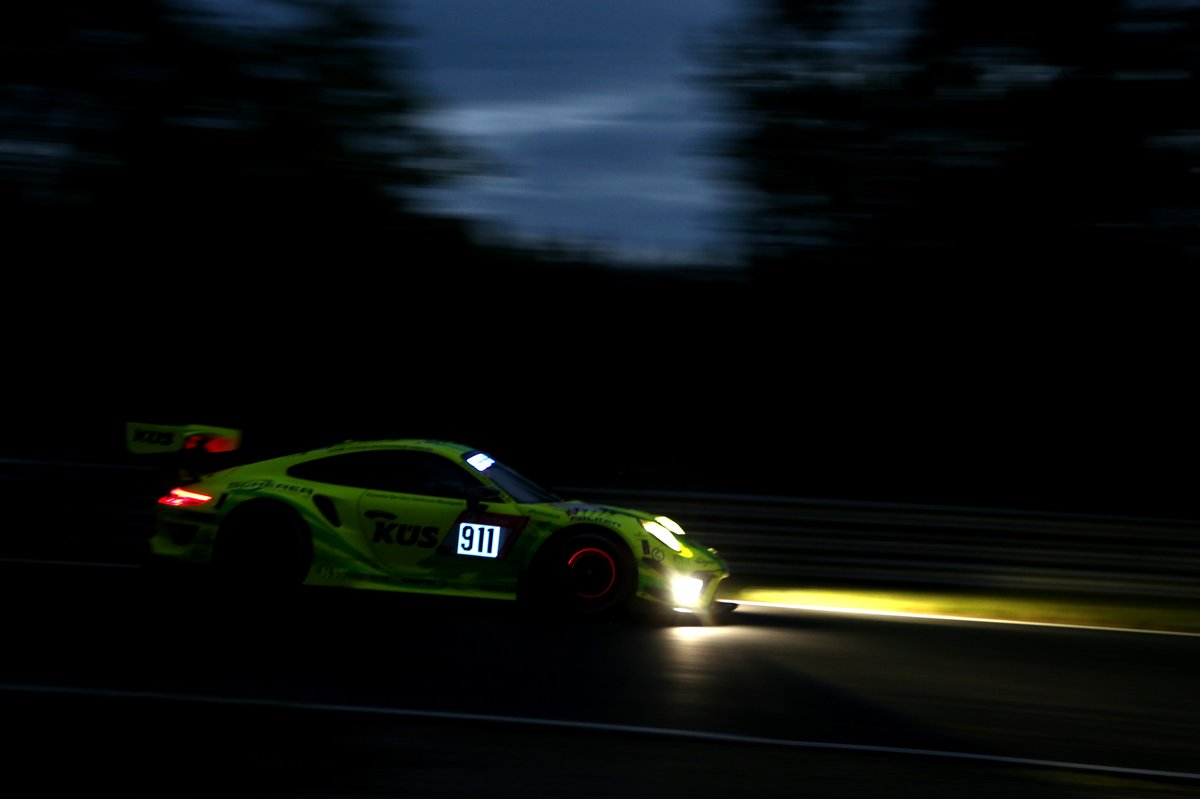 "Nevertheless, I took a big risk immediately and I touched the barrier on the out lap, but only slightly. The balance was not easy to manage, due to the track conditions at that moment the front tyres were not easy to be confident.

"[After the restart] it was just Kevin and Michael’s job, they did it brilliantly. I'm so proud to have won this race together with them and Manthey."

On the significance of winning in the 'Grello' car, Cairoli added: "I had the pleasure to drive it in 2017 in VLN 8, but it was a bit early for me because my only crash so far at the Nurburgring was with 'Grello' in 2017 [in that race]. It was kind of remuneration."

Porsche 'can't be optimistic' for title after Ferrari rout