The 2022 Dakar Rally began in earnest on Sunday with a tricky first stage in Saudi Arabia, but the roadbook again came under fire for a lack of clarity. Competitors and rally organiser ASO explain what happened.

Several competitors dropped out of contention for overall victory in the first full stage near Ha'il, as navigation again proved to be a tricky affair in the deserts of Saudi Arabia.

Just 70km from the finish line on a winding track, many leading drivers and riders got lost on a winding sandy track, leaving astonishing images as they searched for the right waypoint.

This also created a safety issue as the risk of an accident increased with the arrival of four-wheeled vehicles, as different types of machines crossed in opposite directions.

Bahrain Raid Xtreme driver Nani Roma said he almost collided head-on with Audi's Carlos Sainz after passing over a crest, reporting that they escaped an accident by only a few centimetres.

His rival and three-time Dakar champion Sainz was one of the worst affected drivers of the day, losing more than two hours in a desperate attempt to find the right direction.

In the roadbook for the first stage of Dakar 2022, which was seen by Motorsport.com, a right fork at 257.6km showed a fork in a direction of 42°. In the same vignette, it is specified that after 200 metres the route must change to an "average course of 10° [left] and follow the main track."

Ten kilometres later, following three other notes, there was a hidden Way Point (WP C) which made things even more complicated, as this type of waypoint can only be validated if you pass within 200 metres of their centre. As a result, many decided to leave it behind and were hit with a 15-minute penalty.

In an interview with Motorsport.com, Dakar director David Castera defended the roadbook, saying: "It was a very simple note.

"The key point is the punctuation of 'follow main track’. Here many people got it wrong because the main track then turned in different directions and this led to confusion.

"But that's how it is, every day everyone complains about a complicated note. It was a clear note, and it is the same for everyone. Some got it right and some didn't.

“It's a very complicated job, but you have to understand one thing, Nasser Al-Attiyah didn't make a mistake, which says that by following the indications he could find the point. The only one who lost a lot of time among the favourites was Carlos. It wasn't wrong; at most, it wasn't clear enough." 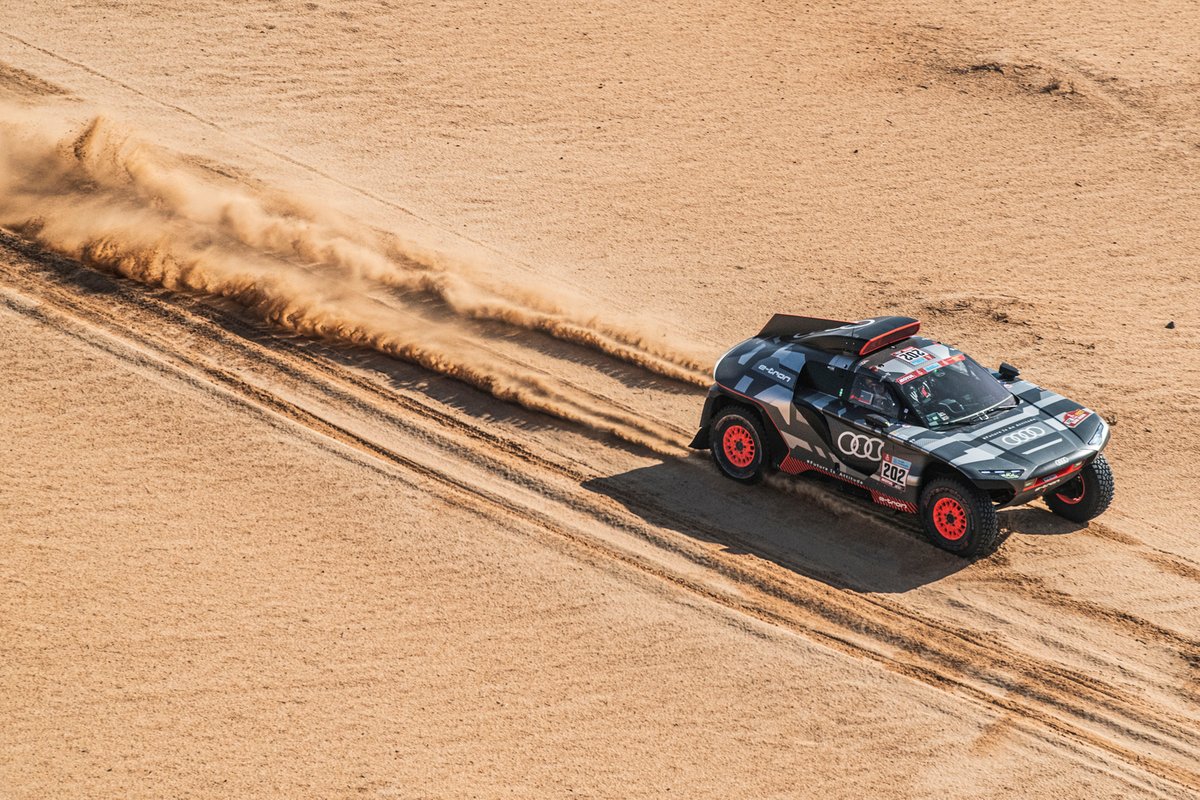 Arriving at the Ha'il bivouac, Sainz was disappointed, although he didn't want to dwell too much on what had been going through in his head during those two endless hours of going back and forth in the same area.

"How many people got lost out there?," said Sainz. "Either we are all very stupid or... There are a lot of Dakars, but I'm very disappointed. If the Dakar wants to do it like this and that on the second day of the race happened what happened, it's a shame."

Roma's co-driver Alex Haro, considered one of the top three navigators in the business, was also disappointed by the lack of clarity of the note, having lost an hour trying to find the correct route.

"Basically, what happened to us is that we tried to follow the main track as it was indicated, but it changed from direction 10º up to 300º," he said when asked to explain the navigational difficulties by Motorsport.com.

"And there was a moment when we saw another car on the right and we went that way. But we realised that we were going the wrong way and we went back to the start.

"Following direction 10º we made progress, but there was a point where you couldn't know which was the right track because there were so many lines.

"The problem in Saudi Arabia is that there are tracks in the middle of the desert. In Spain we are used to having vegetation on the sides, with slopes and you can't get out of them.

"Here they are not marked at all and when the reconnaissance team passes slowly, for them it's a track, but when more vehicles arrive, everything is scrambled. It was a confusing point, quite simply.

"The problem is that before when we had the mapmen [experts in interpreting maps that aren't allowed in Dakar since 2020], you could check small details of the organisation. Now they have to accept that there are things that can be misunderstood. But I told them last year that you can't give a track as a reference in a terrain like this and with so many participants.

"We accept difficult navigation, but when you make demands, you have to be perfect. I'm fine with no mapmen, no outside help, but then the roadbook has to be flawless. And when you lose so many cars and bikes, there's something wrong." 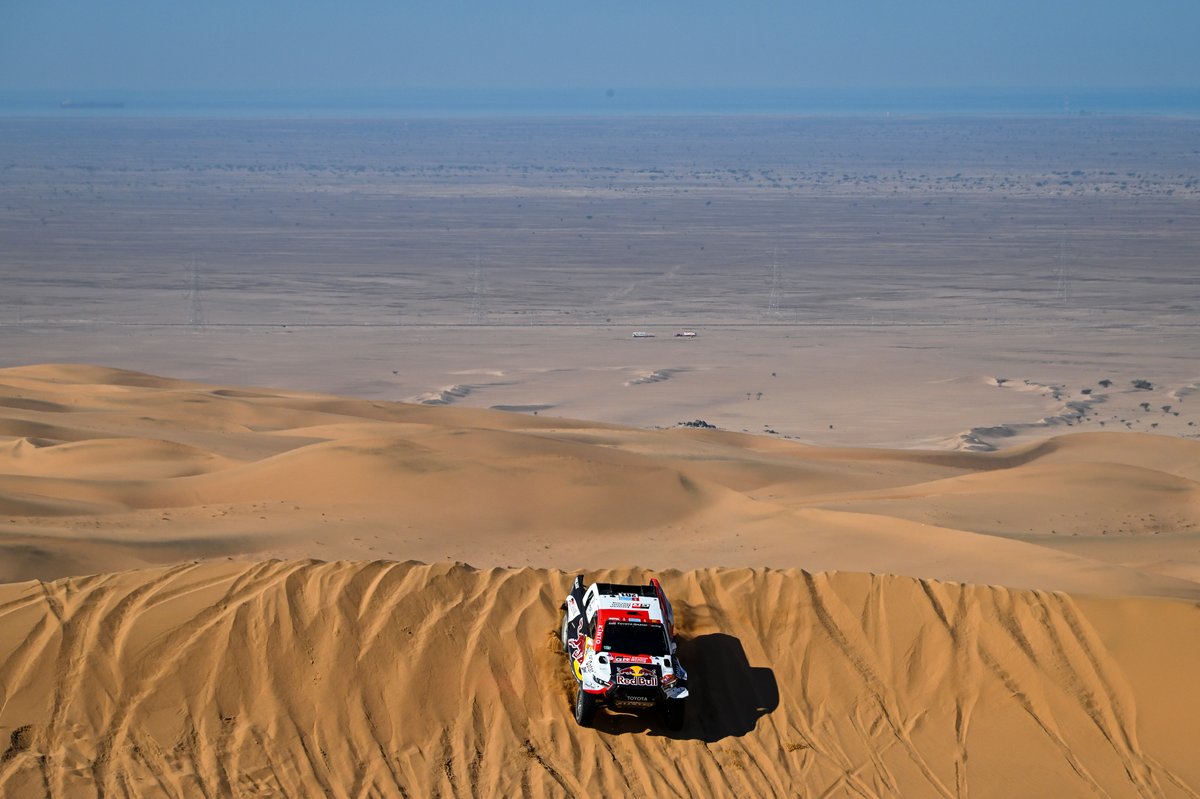 Toyota driver Al-Attiyah and rally legend Sebastien Loeb (Bahrain Raid Xtreme) were one of the few frontrunners to cross the correct checkpoint at the first time of asking, finishing first and second respectively.

Speaking afterwards in the bivouac, Al-Attiyah's co-driver Matthieu Baumel said the key to their stage victory was simply following the roadbook.

"We couldn't have done any better after starting 10th this morning and winning the stage without any mistakes," he said.

"All the cars in front got lost. We just followed the roadbook and Loeb followed us, which for him was very lucky. There were tracks all over the place and it was difficult to follow the road, but we just didn't do crazy things off the track and that was the key: follow the track.

Al-Attiyah added: "Matthieu did a tremendous job, especially in the second part of the stage. There was a moment when we saw a track going a bit to the right, but he told me 'no, you go left', and at the next waypoint it turned out that he was right."