Andy Priaulx says Nicky Catsburg should be excluded from the remainder of the World Touring Car Cup season for their clash at Suzuka, but Catsburg believes Priaulx was at fault.

The two collided towards the end of the 26-lap opening race as they jostled for 13th position.

As Priaulx moved to the inside and braked for the first corner, Catsburg - who a lap earlier had been allowed through by his title-contending BRC Racing Hyundai teammate Norbert Michelisz - hit the rear of the Lynk & Co 03.

That sent Priaulx, who had been in a three-car Cyan Racing train behind Yvan Muller and Yann Ehrlacher, through the gravel trap and into the barriers, while Catsburg ceded a position to Michelisz after the contact but before the safety car was deployed.

"That was totally intentional to swap positions and then drive me off the road," said Priaulx. "That was the most unsporting thing I've ever seen in my life. He was using his car as a weapon of intent, that is super-dangerous.

"As a factory driver you shouldn't be doing that kind of thing as an example for all the young drivers coming through.

"If I had killed a marshal, hurt myself or hit Yann side on, who knows what that kind of driving behaviour could have caused. I think that should [warrant] immediate exclusion for the rest of the season."

Catsburg said he thought the incident was caused by a "crazy, unexpected move" from Priaulx to defend his position.

"He moved under braking and braked way too early," said Catsburg. "Obviously it looks like I fired him off but I cannot anticipate a driver doing something like that.

"It’s a shame that he was in the wall and I don’t want anyone to be in the wall, especially not Andy, Andy and I have a good relationship and I understand now that he has been very angry.

"In the end I really feel it was his mistake. We are for sure going to have to defend ourselves in court, I was going to say, but at race direction.

"Let’s see what happens but in my opinion what he did I could almost say it was intentional, I don’t know, I shouldn’t say it, but it was very unexpected.

"I don’t know what to say more about it but I hope the race direction will come to a good conclusion."

Priaulx elaborated further on the incident speaking to Motorsport.com, saying he did not want to speak to Catsburg and that "I don't trust the guy".

Explaining his movement under braking, he said: "It wasn’t erratic, it was slow, moving to the right from my position which you’re entitled to do, one change of direction.

"I came across progressively obviously to defend into Turn 1, and then as soon as I braked, ‘boom’, around I go.

Update: Catsburg has been handed a 30-second penalty for the collision, dropping him to 23rd and last of the classified finishers. Priaulx, meanwhile, will drop 10 places on tomorrow's grid for his role in the incident - and has also been slapped with a 1000 euro fine for his unsporting gesture after his retirement. 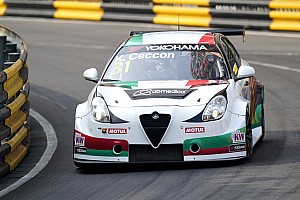