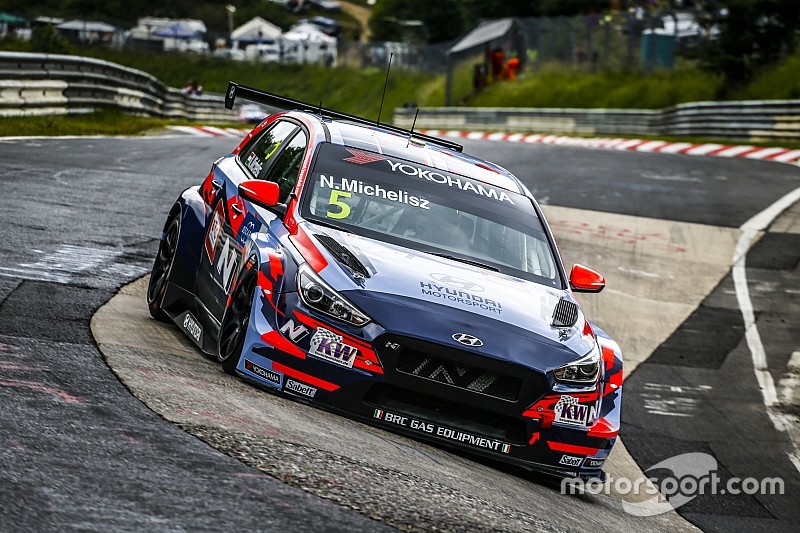 Michelisz beat points leader and polesitter Esteban Guerrieri off the line, before consolidating his advantage over the three laps of the 15.77-mile circuit to claim his second win since the start of the WTCR era in 2018.

Guerrieri's lap in a wet first qualifying session had put him on pole by more than six seconds, but he lost the lead immediately at the start as Michelisz rocketed his BRC Racing Hyundai ahead on the run to the first corner.

Michelisz wasted no time in pulling clear of the chasing pack as the field headed onto the Nordschleife and, having broken the tow before the Dottinger Hohe towards the end of the lap, ended the first lap with two seconds in hand.

Guerrieri was able to reduce that advantage before the finish from a similarly comfortable second place, but Michelisz was always comfortable out in front and moved into second in the drivers' standings as a result of his victory.

While the top two positions were effectively settled on the opening lap, third was only decided after a breathtaking battle in the final sector.

That had initially been contested by Guerrieri's Munnich teammate Nestor Girolami and Frederic Vervisch, who got his Comtoyou Audi up to third on the opening lap.

Vervisch managed to fend off Girolami on Dottinger Hohe on lap one, but was passed halfway down the long back straight by the Honda on the second lap.

But without a generous tow from the slippery Audi, Girolami's momentum stalled and, as he and Vervisch squabbled for third, Rob Huff (Sebastien Loeb Racing Volkswagen) slipped past both before the Tiergarten section that leads onto the start/finish straight.

Having dropped Vervisch on the final lap, Huff and Girolami were then involved in a similar squabble from which Girolami ultimately emerged with third.

The pair touched wheels more than once and, although Huff went through Tiergarten with his nose ahead, Girolami clung on first up the inside and then around the outside to secure the final podium position.

Vervisch finished the best part of three seconds behind Huff in fifth, having held off a pursuing gaggle of cars on the final lap that was led by the Cyan Racing Lynk & Co of Yann Ehrlacher.

Final race polesitter Benjamin Leuchter (SLR VW) came home seventh ahead of the BRC Hyundais of Augusto Farfus and Nicky Catsburg, while Johan Kristoffersson completed the top 10 in his Golf.

Thed Bjork, who started the day second in the points thanks to a pair of victories at the previous round at Zandvoort, slipped from fifth on the grid to finish 11th, beating the WRT Audi of Jean-Karl Vernay over the line by half a second.