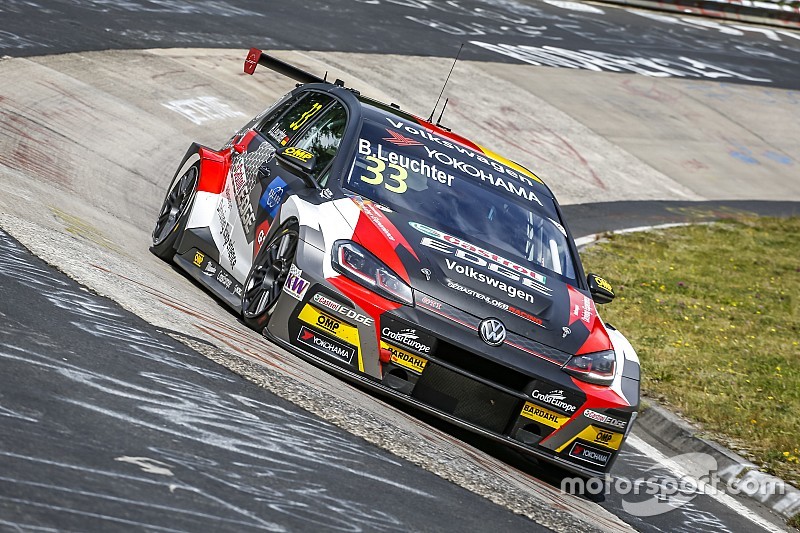 Polesitter Leuchter was forced to work for his win, surviving two attacks from the championship-leading Munnich Motorsport Honda of Esteban Guerrieri on the opening lap and later staying at the head of a four-car train on the final tour.

Guerrieri launched the first of his bids for the lead at the start, making the most of the space that should have been occupied by Rob Huff's SLR Volkswagen - which could not take the start after an incident in race two - to challenge Leuchter into Turn 1.

While Leuchter ultimately gained the spot back exiting a busy first corner - at which Frederic Vervisch hit fourth-place starter Norbert Michelisz - he had to dig deep at the end of the first lap to preserve his lead.

Guerrieri got a good exit onto the long Dottinger Hohe straight at the end of the lap and pulled out of the VW's slipstream on the approach to Tiergarten, and had the Civic's nose ahead as the two headed through the sequence of left- and right-handers.

But Leuchter hung on around the outside and headed onto the start/finish straight with the lead, while a resulting loss of momentum meant Guerrieri forfeited second place to Vervisch's Comtoyou Audi RS3 LMS.

Leuchter had a more comfortable run down Dottinger and into Tiergarten at the end of the second lap and, although he struggled to escape from Vervisch, Guerrieri and the WRT Audi of Jean-Karl Vernay on the final lap, ultimately kept the chasing trio behind to close out the win.

While Guerrieri ended up third, the Argentinian extended his points lead significantly as nearest challenger Michelisz was forced to retire after he was whacked by Vervisch.

Reigning WTCR champion Gabriele Tarquini was fifth in his BRC Racing Hyundai, while the Comtoyou Cupras of Tom Coronel and Aurelien Panis finished an attritional race sixth and seventh.

Eighth went the way of Nicky Catsburg, but only after he overcame the Lynk & Co of Yvan Muller - who had blocked him badly on the second lap.

That put Catsburg on the grass and while he did recover, it allowed race two winner Johan Kristoffersson to challenge him for 10th - only for the SLR VW driver to lose control on the grass and hit the barrier hard.

Catsburg's overtake on Muller was not shown, but he and Gordon Shedden (WRT Audi) managed to jump the Cyan Racing driver on the final lap, with Kevin Ceccon coming home 11th in his Team Mulsanne Alfa Romeo Giulietta.

Portugal WTCR: Michelisz closes in on Guerrieri with win