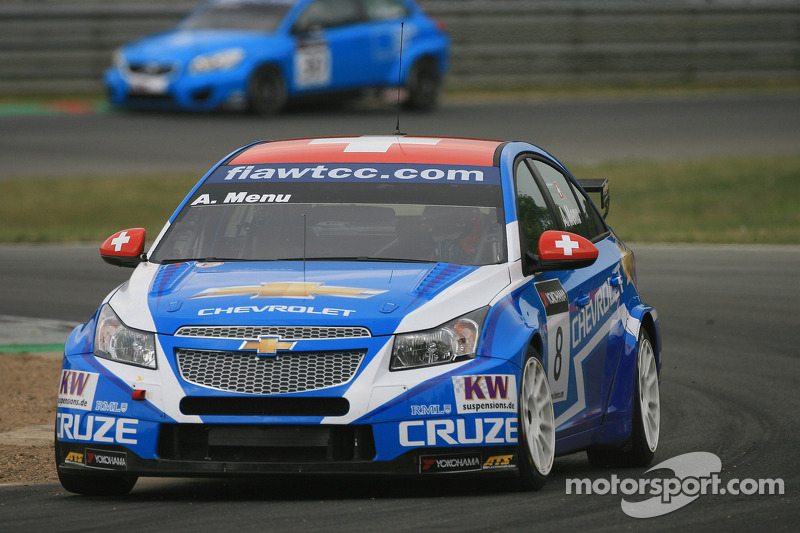 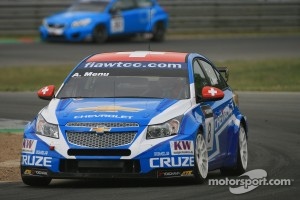 Just like at Suzuka two weeks ago, Chevrolet driver Alain Menu set the fastest lap in today's test at the Shanghai Tianma Circuit. The Swiss racer posted a fastest lap of 1:05.978 in the dying seconds of the 30-minute session, climbing on top ahead of Robert Dahlgren and Colin Turkington.

Under an overcast sky, WTCC competitors had their first taste of the Chinese racetrack, using the first part of the test session for getting to know the twisty circuit. Despite their cautious approach some drivers had moments, especially at Turn 12, were Franz Engstler, Kristian Poulsen, Michelisz, and Mehdi Bennani spun and rejoined.

Lap times improved consistently with Tom Coronel, Norbert Michelisz and Rob Huff setting the early pace. Dahlgren and Menu signed the first significant improvements; the Swede completed a lap in 1:06.912 that was immediately beaten by Menu's 1:06.890. However Dahlgren responded with a 1:06.815 with ten minutes left.

Moments after, Javier Villa spun off at Turn 4 beaching his BMW onto the gravel trap, which forced the race director to wave the red flag. When the session resumed, Turkington posted a new provisional fastest lap of 1:06.317 and then improved further to 1:06.103. But Dahlgren reclaimed the first position once again clocking a 1:06.017 with only five minutes to go. A time that was eventually beaten by Menu's last spell of 1:05.978.

The 35-year old Kuok Io Keong has built his racing experience in the Asian and Macau touring car series, claiming class victories in the 2010 Macau AAMC Challenge and the 2011 Macau Road Sport Series.

Last year he tried to qualify in the WTCC event at Macau at the wheel of a Honda Accord car, to no avail.

Macau-based team RPM Motorsport have entered a BMW 320si race in their home WTCC event. Mak Ka Lok will be at the wheel of the 2.0-litre normally aspirated German car.

The 46-year old Mak Ka Lok has mostly raced in the Far East region, taking part in the Asia, China, Hong Kong and Macau touring car series. His best results were victory in the 1999 Macau Cup Race and third place in the 2010 Asian Touring Car Series.

Once again the Engstler Motorsport will run four cars in Macau.

Jo Rosa Merszei will take the wheel of the team's 2.0-litre normally aspirated BMW 320si car that was raced by Charles Ng in Suzuka and is driven by Fabio Fabiani this weekend in Shanghai.

Rosa Merszei - 37 years old - was born in Hong Kong, but is a Macau citizen and is obviously a familiar face for the Guia circuit, as he took part in many races there, from the Macau Formula 3 Grand Prix to the WTCC events in 2009 and 2010.

Series to visit America in 2012