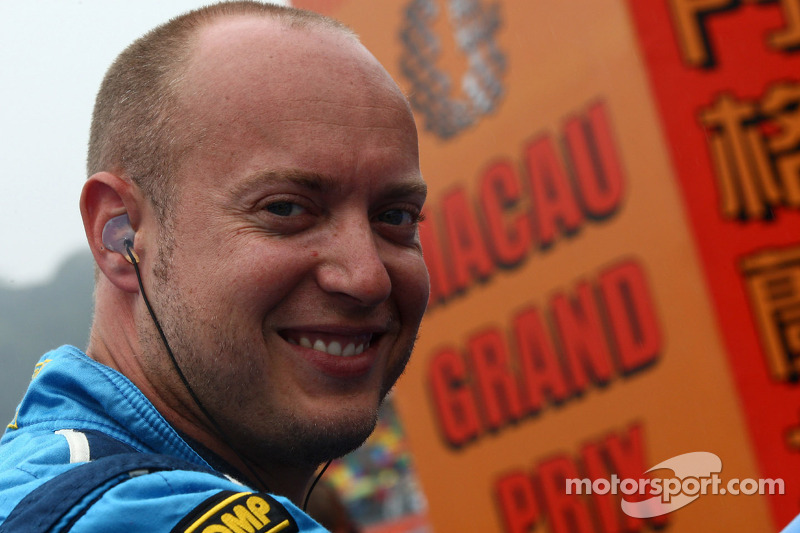 Rob Huff and Yvan Muller have begun their world title showdown in Macau by setting the two fastest laps in today's test session. 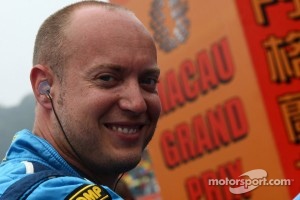 The track was slippery after a morning shower. The session kicked off thirty minutes in late because the marshals had to fix the barriers at the "R" bend, following a crash during some support race practice.

Gary Kwok was the first to make a mistake, spinning at Moorish Hill. He rejoined, but soon afterwards Charles Ng hit the barriers at the Melco Hairpin. The front left wheel loose, his BMW limped to a stop a few hundredths metres further, which forced the session to be red-flagged with twenty minutes to go.

Shortly before the disruption, Kristian Poulsen had set the fastest lap of 2:52.813, but by the time the session resumed the track had dried up and the duo Alain Menu-Yvan Muller significantly moved the mark forward.

With three minutes left Tiago Monteiro jumped on top with a lap of 2:37.491 that was soon outpaced by Muller's 2:36.025. Just before the chequered flag dropped, the Frenchman improved again to 2:35.549, but Rob Huff settled the matter for good stopping the watches at 2:34.681.

"It was a very difficult session. Some of the corners were pretty wet, some others completely dry. You could not say what was behind the next corner and you must pay attention to the different colours of the tarmac to guess where it was better to place your tyres," Rob Huff said.

Behind the two title contenders Darryl O'Young set an impressive third fastest lap - and best of the Yokohama Trophy - of 2:36.466.

A couple of other drivers had moments. Philip Ma spun at Moorish Hill and rejoined, while Michel Nykjær dived the nose of his car into the wall on top of the Faraway straight.

Drivers will hit the track again tomorrow for two 30-minute practice sessions and the afternoon's qualifying session that will be run in the extended format provided for street circuits: 30 minutes for Q1 and 15 for Q2 (instead of 20 and 10).

The FIA issued an amended weight list for the championship's final at Macau, including the Chevrolet Lacetti and Peugeot 308 cars that make their first appearance during the current season.

As FIA homologated cars on their second participation in the season, the two Chevrolet Lacetti cars entered by Corsa Motorsport for Filipe de Souza and Kuok Io Keong will be imposed the maximum compensation weight of 40 kg in addition to their minimum weight of 1140 kg.

Lo Ka Chun's Peugeot 308, entered by the 778 Auto Sport team, will receive 20 kilos of compensation weight, according to Article 10 B of the WTCC Sporting Regulations that allows the participation of cars in compliance with the technical regulations of a national championship. Its participation remains subject to the approval of the Touring Car Commission; anyway it will not be eligible to score championship points.

Many of the drivers who will take part in this weekend's main races at Macau - WTCC Guia Race, Formula 3 GP and Motorcycling GP - attended a promotional event yesterday afternoon.

First they posed for group photos on the steps that lead to the ruins of St. Paul's, Macau's worldwide known landmark, where they mingled with a huge crowd of fans and tourists.

Later they visited the Macau Grand Prix Museum, posing for other pictures, making themselves available for interviews and finally signing autographs for groups of children of the local schools.

Bamboo-engineering announced today that Yukinori Taniguchi will not be racing in the WTCC final event at Macau this weekend.

The extent of the damage sustained in the crash the Japanese driver had two weeks ago during the first race at Shanghai has meant that the team have been unable to repair the car in time for this weekend's event.

Team Principal Richard Coleman said: "It's obviously very disappointing for Yuke and the team, but unfortunately we just haven't had enough time to repair the car. Being on the other side of the world has made it logistically more difficult with a demanding freight schedule. If this had occurred at one of the European events, then we would have had the car repaired, no problem. It's just unfortunate that this amount of damage has occurred between these two events."