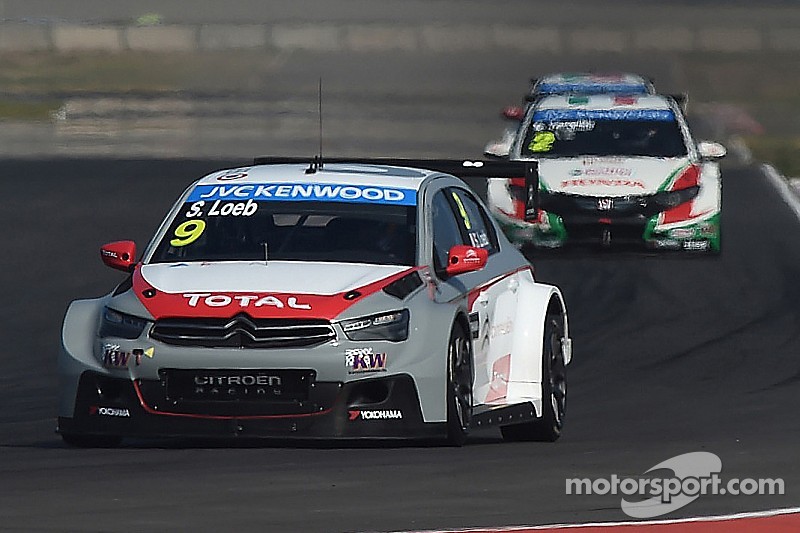 The qualifying sessions and races of the ninth round of the FIA WTCC took place to day at the Beijing Goldenport Park Circuit.

A long and action-packed day began with qualifying. The sun was shining, but the track was still cold and slippery. In Q1, Ma Qing Hua’s programme was disrupted when the red flag was brought out, and the Chinese driver could only manage 14th place. José María López and Yvan Muller then clocked the best times in Q2, while Sébastien Loeb finished seventh. The two Citroën drivers who qualified for Q3 claimed the third- and fourth-fastest times with their single flying laps, with Yvan Muller going slightly quicker than José María López.

At the start of the first race, Yvan Muller snatched second spot from an unsuspecting Gabriele Tarquini. José María López also tried to find a way past the Italian, but Tarquini resisted. After seven laps behind the safety car, the race got back underway and Chilton blazed away to record a deserved victory. Yvan Muller held on to second place, while José María López moved up to third when Tarquini ran into mechanical trouble.

I’ve fallen a few points further behind in the Championship, so I’m not particularly optimistic about the end of the season.

Meanwhile, the other two Citroën C-Elysée WTCCs were providing plenty of entertainment back in the chasing pack. Sébastien Loeb had climbed two places on lap 1, but he was overtaken by Gianni Morbidelli and Norbert Michelisz when the safety car made its exit. The most successful rally driver of all time did not give up, however, and he slipped past the Hungarian to regain a top 5 spot. As is his wont, Ma Qing Hua produced a flamboyant performance. Having started in fourteenth position, the Chinese driver was 11th by the end of lap 1. He then climbed to eighth place, before being forced to withdraw due to a puncture.

A few minutes later, the drivers were back out on track for race 2. Starting from the second row, Sébastien Loeb quickly gained a place, reaching the first corner in third, behind Huff and Coronel. José María López, too, made a strong start, ending the first lap in sixth spot. Yvan Muller, who started in eighth position, was passed by Tom Chilton on lap 5.

José María López then set about closing the gap on the leaders. After overpowering James Thompson and Norbert Michelisz, he was even closing in on Sébastien Loeb over the last few turns! The two Citroën C-Elysée WTCCs crossed the finish line side by side, but Loeb held on to his podium spot, just three hundredths of a second ahead of his teammate. Yvan Muller came in ninth, while Ma Qing Hua finished outside the points.

Despite recording its first winless weekend of the 2014 campaign, the Citroën Total can take a lot of positives out of the Beijing meeting. The Drivers’ World Championship is now a three-horse race between José María López (339 points), Yvan Muller (273) and Sébastien Loeb (238). Over the two races in Beijing, López was the man who most enhanced his title chances, extending his lead over Muller by six points. In the Manufacturers’ World Championship, Citroën needs only fifteen more points to secure the title.

What They Had To Say

Yves Matton, Team Principal, Citroën Racing: “On paper, this winding little circuit was not the best-suited to our Citroën C-Elysée WTCCs, particularly with the advantage granted to our rivals through the compensation weights system. For the first time this year, we have come out of a weekend without winning a race, but we have nevertheless made good strides towards securing the two World Championships. Our thoughts now turn to Shanghai, which will be a particularly important meeting for Citroën.”

José-María López: “For the team as a whole, this weekend has been more difficult than the others. The other teams have been working really hard over the last few weeks and the performance gap is closing all the time. As far as I’m concerned, everything is going in the right direction and I’ve extended my lead again. But the championship is not over yet. There are still three meetings and six races left.”

Sébastien Loeb: “In race 1, I had trouble handling my tyres, which were behaving quite unpredictably. The second race was better. I was a little bit faster than Tom Coronel over the first few laps, but not enough to get past him. I made a slight mistake at the end, and José came back at me. It was really close, but I’m happy to have kept my podium place.”

Yvan Muller: “I got off to a good start in race 1. I gave it my all to stay in touch with Tom Chilton, but he was just too fast. It was the same story in race 2: I couldn’t get past him! I’ve fallen a few points further behind in the Championship, so I’m not particularly optimistic about the end of the season. But I’ll continue to give of my best!”

Ma Qing Hua: “After clocking the fastest time in free practice, I was hoping for some good results today! My chances took a blow in qualifying, when the interruption to Q1 disrupted my programme. In race 1, I was making a good fist of climbing up the field, but it was hard to keep the car on the track. I went through a gravel pit and ended up with a puncture after crashing into a stack of tyres. I hope things will go better for me in Shanghai! That really will be a home meeting for me!”

The FIA WTCC moves straight on to Shanghai next weekend. After racing at a small venue in Beijing, the competitors will be battling it out on the same track that hosts the Formula 1 Grand Prix. “It’s difficult to imagine two more different circuits than Goldenport and Shanghai,” explains Ma Qing Hua. “It’s a terrific circuit. Corners 1, 2, 3 and 4 form an incredibly technically demanding sequence, and there are other fast bends to contend with too. We will have to make compromises in our setup to make sure we have a good turn of speed in the long straight as well as good control on the bends. There will be opportunities for overtaking.”

The Citroën driver can count on vociferous support from the crowd in what is his home city. “It really is a home meeting for me! My friends and family and my supporters will be there, but I will stay focused to make sure I get the best possible results. Hopefully, we’ll win the World Championship titles in Shanghai!”